A Review of The Near Witch by Victoria Schwab

You could batch Schwab's first novel in with the latest crop of paranormal romances, but it's really something more than that. It's a sort of horror fairy tale, complete with ghosts and small children who dance in a circle, singing an ancient song, before they begin disappearing one by one, night after night. 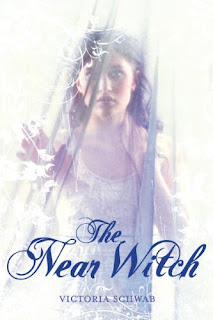 And then there's Shane. No, I mean there's a stranger in town, a strange stranger who almost immediately gets blamed for the disappearing children. Only Lexi doesn't believe the rumors: she is sure the boy has troubles of his own. She names him Cole, and she asks the town witches—who are wisely, even cynically, gearing up to be the possible subjects of a witch hunt—to help her.

Turns out the town of Near has been keeping secrets about its past. Now Lexi must investigate, although her scowling uncle and a bossy suitor try to stop her, telling her it's not lady-like.

Lexi is a strong main character, determined to put on her dead father's old boots and go searching for answers, no matter who might try to stand in her way. Lexi's powerful personality and sense of justice make her admirable, but they also make her a target.

Schwab is interested in themes of small town loyalty, as well as small-mindedness and a suspicion of anyone who doesn't fit in. The events of the Salem Witch Hunt inevitably spring to mind. (See Rosalyn Schanzer's new book, Witches: The Absolutely True Tale of Disaster in Salem. Check out Betsy Bird's review here.) In The Near Witch, a tragedy from the past will not stay buried; it reverberates into the future, Lexi's present.

The author has a lovely storytelling voice. Here is Lexi thinking about her father and the present-day witches of Near:

My father taught me a lot about witches.

Witches can call down rain or summon stones. They can make fire leap and dance. They can move the earth. They can control an element. The way Magda and Dreska Throne can. I asked them once what they were, and they said old. Old as rocks. But that's not the whole of it. The Thorne sisters are witches, through and through. And witches are not so welcome here.

The Near Witch is almost a fable, but it is saved from being pedantic by Lexi's appealingly fierce character and her efforts to help, not only Cole, but the entire town.

Cole's story is also moving, and his interactions with Lexi are more heroic than romantic. The romance is quiet and tender, taking a backseat to the pair's efforts to find the missing children.

Other characters may be a tad more predictable, but the parts they play in the unfolding drama contribute nicely to the whole in Schwab's new book. I especially like the Thorne sisters.

Perhaps the best thing about The Near Witch is how atmospheric it is. Even though no one runs around a Victorian mansion in a white nightgown, you get a wonderfully eerie feeling of a town that is haunted, of ghosts drifting silently across the empty moors. I'll end with one more excerpt, as Lexi looks out the window one night:

Our house sits at the northern edge of the village of Near, and beyond the weathered glass the moor rolls away like a spool of fabric: hill after hill of wild grass, dotted by rocks, and a rare river or two. There is no end in sight, and the world seems painted in black and white, crisp and still. A few trees jut out of the earth amid the rocks and weeds, but even in this wind it is all strangely static. But I'd swear I saw—

This time my eyes are keen enough to catch it. ...

I squint, pressing my hands against the cool glass. The shape is a body, but drawn too thin, like the wind is pulling at it, tugging slivers away. The moonlight cuts across the front of the form, over fabric and skin, a throat, a jaw, a cheekbone.

There are no strangers in the town of Near. I have seen every face a thousand times. But not this one.

Note for Worried Parents: You'll find a scary witch in this book, as well as some teen attraction and a few kisses. We also hear about a cruel murder. The Near Witch is a book for teens, but 11- and 12-year-olds who like dark fantasy, historical fiction, horror, and paranormal romance will be interested, too.
Posted by KateCoombs at 4:31 PM