If you've ever visited my author's website, you will know that I am a real fan of frogs, which I like to think of as nature's clowns. (Frog princes are featured prominently in my book, The Runaway Princess!) Today let's take a look at three frog-themed picture books, two fiction and one nonfiction, two new and one old. 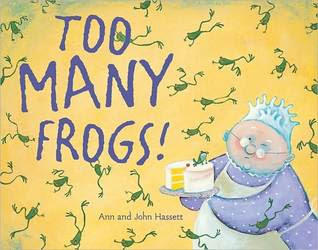 Too Many Frogs! by Ann and John Hassett

Not to be confused with Sandy Asher's book, which lacks the explanation mark in the title, this new picture book takes a look at what Nana Quimby does about a frog invasion in her basement. (The plot may remind you a tiny bit of that beginning reader classic, The King, the Mice and the Cheese, by Nancy and Eric Gurney, or better still, Helen Palmer and P.D. Eastman's A Fish Out of Water.)

Nana Quimby is baking a cake when she discovers that her basement has flooded. A helpful paper boy suggests she call a plumber. Soon the water is gone, but a frog appears in her kitchen. Ten frogs, in fact. "'Put the frogs in a goldfish bowl,' said a girl jumping up and down. So she did."

Twenty more frogs appear, and "a boy running fast" suggests she put the new frogs in cups of water.

You can see where this is going, right?

John Hassett's acrylic illustrations give us a marvelous Nana Quimby. For example, on one page we watch her white eyebrows rise in dismay as she stares down at the frog in the cup of water she's holding, with nineteen other frog-filled cups and mugs sitting around the kitchen. There's a parrot in a cage, and out the window we discover a cat chasing a mouse. Perhaps my favorite detail is that Nana, in a lavender polka-dotted dress and white apron, wears blue tennis shoes. Note also her hair, coifed in a goofy way that faintly resembles a chef's hat.

Thirty frogs, forty frogs, fifty frogs—the neighborhood children continue to make suggestions, but eventually Nana Quimby comes up with her own solution, and the reader comes full circle to the richly imagined smell of a freshly baked cake.

Kids will appreciate both Nana's burgeoning quandary and the way passing children give her possible solutions—they may even have their own suggestions.

Apparently this husband-and-wife team has done two previous books featuring Nana Quimby, along with a couple of other picture books.

If the other books are anything like this one, with its soberly escalating absurdity, I'm in! 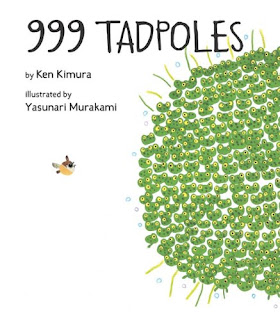 This book was originally printed in 2003 in Japan, but just became available in English this year. And I'm glad it did.

Consider that age-old parental dilemma: it's all very well to have 999 darling tadpoles, but when your tadpoles turn into young frogs and outgrow their pond, what do you do?

Now the pond was too small for them.

"We can't breathe!" called another.

"We have a situation here," said Father.

"We'll have to move," said Mother.

To say the theme is "Safety in numbers" is not enough; a better way of putting it is "Family is there for you." The message is delivered in a wry, dry style that I thoroughly enjoyed.

Murakami's illustrations are simple, but her green-and-yellow frogs really pop on the stark white backgrounds. One of the funniest spreads shows Father Frog demonstrating to his children what a snake looks like. Parts of the artwork seem deliberately designed to look like a child's drawings—note the trees and the clouds, for example. Other components are slightly more sophisticated, such as the illustrator's adorable birds.

999 Tadpoles is a clever take on the quest story, made simple enough for the youngest readers, but with a subtle humor that will appeal to parents. And of course, children ages 4 to 7 will like the idea of growing bigger and moving out into a world filled with adventure.

Note: Want to see a whole bunch of frogs in one spot? Try this brief YouTube video. 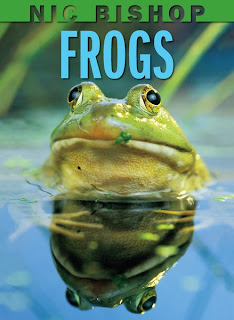 If you haven't heard of Nic Bishop—well, I just can't imagine that, actually. This photographer has created numerous award-winning nonfiction books for children. Frogs came out in 2008, which means it should be readily available at your local library (assuming budget cuts haven't shut the place down).

A frog's life is all about eating.

Frogs eat almost anything that moves and can fit inside their mouths. Once, an African bullfrog ate seventeen young cobras, one after another.

Some frogs seek out their food. A toad hops around after dark, snapping up moths, beetles, and crickets. It may eat more than 5,000 insects during a single summer. Other frogs ambush their prey. A horned frog hides among leaves on the rain forest floor in South America. It stays absolutely still, day after day. When an animal comes by, the frog watches attentively, waiting until it moves closer. Then it seizes the prey with a loud snap of it hug mouth. The horned frog is not a fussy eater. It gulps down cockroaches, lizards, mice, and even other horned frogs.

The accompanying photo shows a horned frog with a mouse tail hanging out of its mouth. The caption reads: "It is easy to see why some people say that a frog is like a stomach with legs, eyes, and a very big mouth. This horned frog has just swallowed a mouse."

The next page begins: "Frogs are prey, too." And discusses frog camouflage, with two more terrific photos to illustrate the point.

I was pleased to come across the last spread, which shows Nic Bishop in a canoe on a pond and explains how he trained one particular frog to be comfortable with the camera so he could get a photo of it catching its prey, among other frog encounters like adopting some gliding frogs.

Remember the days when nonfiction books were in black and white and were mostly text? Well, I've said it before and I'll say it again—the past 20 years have seen a Renaissance or even a first birth in beautiful children's nonfiction. DK's Eyewitness books may have led the charge, but Nic Bishop is the reigning king of photo-illustrated nonfiction for children. (Okay, better give a nod to Seymour Simon! He can be prime minister.)

You really should visit Nic Bishop's fascinating website. Take a look at the awards his frog book has won, as well as a list of his other books. Find out more about how he does the research for his books, including traveling the world to take the photographs. And then there's his life story, briefly yet tantalizingly summarized here.

Turns out Nic Bishop grew up in Bangledesh, the Sudan, and New Guinea. He started taking photographs at age nine. At ages sixteen and seventeen, he traveled the highlands of New Guinea on foot or in a dugout canoe, taking pictures and interviewing villagers with his tape recorder. I'd love to see a book-length biography of this guy!

In the meantime, I can heartily and happily recommend his Frogs to you.

Note: Watch this Scholastic book trailer for Nic Bishop Spiders to see Bishop catching spiders in the woods and taking them home to his studio to photograph.
Posted by KateCoombs at 10:19 AM

Frogs are great. I love reading about them and they make great studies for students.

Jackie--Aren't they? The way they change from tadpoles to adult frogs is marvelous, and that's just the beginning!