A Review of Liesl & Po by Lauren Oliver

I've heard a lot of talk about this book lately, so I was eager to read it and see for myself. The author has already written a couple of well-regarded books for teens: Before I Fall and Delirium. Sometimes authors for older readers who switch to writing for younger children have a little trouble with the transition, but Oliver plunges into the MG genre skillfully.

Of course, I am a 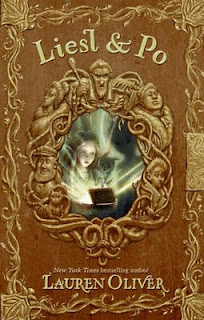 sucker for great metaphors, and Oliver has a real talent for them. Here's how the book begins:

On the third night after the day her father died, Liesl saw the ghost.

She was lying in bed in the uniform gray darkness of her small attic room when in one corner the shadows seemed to crimp, or flex, and suddenly standing next to her wobbly desk and three-legged chair was a person about her height. It was as though the darkness was a sheet of raw cookie dough, and someone had just taken a cookie cutter and made a child-sized shape out of it.

"What are you?" she whispered into the darkness, even though she knew it was a ghost. Normal people do not appear out of darkness, nor seem to be made out of liquid shadow. Besides, she had read about ghosts. She read a lot in her little attic room. There was not much else to do.

The plot feels a bit like Charles Dickens meets Cinderella. And what a terrific cast of characters!

We've got Liesl, whose awful stepmother has locked her in the attic and has no plans whatsoever to let her out. (Augusta is too busy spending Liesl's inheritance.)

Then there's Will, the boy who stands down in the street watching Liesl's window in between running midnight errands for his heartless master, an alchemist.

Another character I like very much is a simple guardsman named Mo who carries a cat.

The sun never shines in Liesl's land, so the story takes place in a great deal of gloom and chill. Steam trains and factories add to the atmospheric mood of the book.

Liesl and Po has the feel of a fable. It's shaped like a folktale or perhaps a theater piece for children, a Christmas pantomime. The characters are deliberate types: the Wicked Stepmother, the Simpleton, the Oppressed Good Daughter, the Evil Alchemist, the Kindly Boy, the Greedy Duchess, the Thief. This is a good thing: the stylized feel of the book really works with the story Oliver is telling. So does the sweetly whimsical tone, shining forth in spite of the gloom and the various villains.

The book's magic, which is carried around in a box and changes hands comically (as in one of Shakespeare's plays about mistaken identity), is defined rather vaguely. It becomes a Symbol, not the tool you have seen in other fantasies.

Of course, let's not forget that this book is in part a meditation on death, loss, and the afterlife. Oliver herself says as much in the Introduction:

I wrote Liesl & Po during a concentrated two-month period at the end of 2009...

At the time, I was dealing with the sudden death of my best friend. The lasting impact of this loss reverberated through the months, and it made my world gray and murky, much like the world Liesl inhabits at the start of the story....

Only in retrospect did I realize that I was writing about myself—that Liesl's journey was my own.

The author goes on to define the book, not as an escape, but as "the opposite of an escape; it is a way back in...."

And so we return to that little ghost, Po, who becomes Liesl's best friend, despite the space (and philosophy) that separates them. Here is a moment when Liesl asks Po for a favor:

"And you must help me," Liesl finished.

Po was unprepared for this. "Me?" it said unhappily. "Why me?"

"Because you are my friend," Liesl said.

"Friend," Po repeated. The word was unfamiliar by this point. Something tugged at the edges of Po's memory, the faintest of faint recollections of a bark of laughter, and the smell of thick wool, and the sting of something wet against its cheek. Snowball fight, Po thought suddenly, without knowing where the words came from: words he had not thought of in ages and ages, in so long that millions of stars had collapsed and been born in that time.

"All right," Po said. It had never occurred to Po that it would ever have a friend again, in all of eternity. "I'll help you."

There are chases and villains and peril and a rich setting in this story. But most of all, there is a wistfulness. Having read Lauren Oliver's introduction (after reading the book, I'm happy to report!), now I know why.

Children will probably like Liesl & Po for the adventure and the appealing characters, but grown-ups might read it and get a bit teary, the way they feel after reading Antoine de Saint Exupéry's The Little Prince.

Note for Worried Parents: Oliver's portrayal of the afterlife may be of concern to religious families. A discussion of your beliefs vs. the book's take on things would be useful.

Also: I requested a copy of this book from Amazon Vine. Liesl & Po will be available in bookstores on October 4.
Posted by KateCoombs at 8:07 AM

Thanks for your review of this. I've read Lin Oliver's YA books, and was interested in her middle grade fiction. It's interesting that a real-life sadness informed her writing.