A Review of Wisdom's Kiss by Catherine Gilbert Murdock

Fun fact about this writer: her sister Elizabeth Gilbert is the author of Eat, Pray, Love. And with Murdock's new book, we learn that she really likes playing with form as well as genre, something only hinted at in her previous take on the princess tale, Princess Ben. 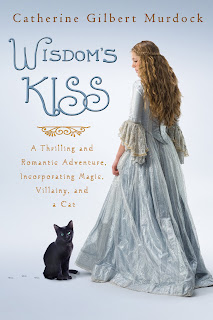 Princess Ben even makes an appearance in this book as the grandmother of one of the main characters. In Wisdom's Kiss, Murdock creates an epistolary novel utilizing more than one format. And so our story is told in chapters that are more or less alternately written in letter form, diary form, memoir, encyclopedia entries, and even small plays. All of which allows our story to shift point of views (at least 7, by my count) and thus voices regularly as it moves forward. As an introductory quote states: "Truth requires many voices, for it is a relentless foe but a most unobliging mistress."

Wisdom's Kiss: A Thrilling and Romantic Adventure, Incorporating Magic, Villainy, and a Cat begins with an orphaned tavern maid named Trudy (short for Fortitude) who happens to have second sight. Trudy's best friend is the handsome miller's son, Tips, so when he leaves with the Master Swordsman, Felis el Gato, ostensibly to become a soldier, she misses him terribly. (If you're paying attention, you'll notice mild allusions to a well-known fairy tale in this book.)

Six years have passed as the next chapter begins in the form of a play that introduces Queen Temperance and her sister, Princess Wisdom. We also encounter a rather fickle suitor, Duke Roger of Farina, who is supposed to propose to Temperance, but proposes to Wisdom instead. We learn in Wilhelmina, Duchess of Farina's notebook (diary) that she is Not Happy with her son Roger's actions. She had specifically assigned him to court the queen because she wants to take over the kingdom of Montagne. Yes, Wilhelmina is the villain of this piece!

On we go, eventually reading Princess Wisdom's (Dizzy's) diary as she travels to Farina with her grandmother and falls madly in love with someone completely unexpected. (You'll find that Dizzy is a daring soul.) Meanwhile, young Queen Temperance is left to deal with another suitor, and our girl Trudy sets off to find out what happened to her dear friend, Tips.

As you can imagine, the plot thickens, and thickens again, with so many voices and adventures. Yet beneath it all, what we have is a rather mannered, orderly story, and eventually the puzzle pieces come together.

I wouldn't recommend the book to a reluctant reader, but a reader who delights in fantasy of every sort will no doubt enjoy Wisdom's Kiss. I tracked down the book because I loved Murdock's Dairy Queen trilogy, but this is quite a different story. The Dairy Queen books are contemporary YA, set on a farm, and their heroine is a high school athlete. What the two books do have in common is an emphasis on character, which might explain the different forms used in Wisdom's Kiss, actually. Murdock is clearly fascinated by individual characters, with their varying points of view and motivations. I'll give you an example, but keep in mind that this excerpt represents Princess Dizzy's voice, not the whole book:

Yes that inn had mattresses older than Nonna Ben but I could see the river from my room & hear the boatmen—who know more curses than I shall ever be able to remember! One man in particular had a true gift—wouldn't it be wonderful if I could rattle off blasphemies so! He was a veritable poet—I could have stayed awake until dawn just to hear him! In fact I was wholly primed to smuggle myself down to the dockside bustle that I might better attend when Escoffier [the cat] appeared quite glaringly on the windowsill relaying with every black whisker of his being that if I so much as stepped from my chamber I should be in Very Great Trouble.

While the plot of Wisdom's Kiss may seem rollicking and complicated at first glance, the book is ultimately about its characters. And no, Murdock doesn't go in for conventional happy endings—at least not the one you might have expected.

My only hesitation in recommending this book is that, because it does jump around, it tends to feel a little disconnected, and no one character gets enough page time for the depth of development you might like to see. Still, Wisdom's Kiss is a lively read. With its unique perspective on court intrigue and a generous dollop of magic, the book is a fun pick for capable young readers looking for a break from the recent onslaught of school assignments.

Besides which, there's a circus!

Note for Worried Parents: Wisdom's Kiss is categorized as Young Adult. It doesn't really have any worrisome content and could easily be read by 10- to 12-year-olds as well as teens. However, its characters are older teens and adults, so its tone is relatively grown-up.

Also: I requested a copy of this book from Amazon Vine. It will be available in bookstores on September 13.
Posted by KateCoombs at 4:40 PM

I loved Murdock's Dairy Queen trilogy and also enjoyed Princess Ben, so I'm looking forward to this one. Thanks for the review!

I almost think I'm more than willing to set aside depth of character development for once for the chance to dive into such a puzzle of fantastic awesomeness. I loved the magic in Princess Ben, and the idea of showing that world through a multi-- multi-what? Not quite multi-media, but anyway-- through such a FOUND BITS format is probably intriguing me more than would a straight-up companion novel.

Amy--I'll admit I hadn't realized the term "epistolary novel" included all those different formats, not just letters, but it does! Though multi-something-or-other certainly promises to be more apropos.