The Stars Shine All Day Long

At the SCBWI Conference in August, I was on a budget, so I only bought one book (a first for me!). It's about stars. Which leads me to think about the end of the space shuttle missions... People have all kinds of opinions about what our government should spend money on, and I do understand about belt-tightening, but still; it's a little sad.

And yet the stars shine on, all night and—blotted out by our own star—all day. So let's talk about star books, or rather night books, two new and two old. I'll begin with the book I just bought, available as a kind of sneak preview at the conference, but actually due out on October 4. 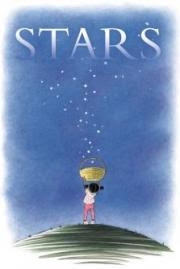 I'm somewhat spoiled by having heard illustrator Marla Frazee and editor extraordinaire Allyn Johnston talk about the making of this book. But their experience won't be completely different from your experience as a reader—both of them fell in love with the poetic text by Mary Lyn Ray, and then Marla set about illustrating it.

Stars is unabashedly a concept book. It acknowledges the "behavior" of actual stars just a bit, then speaks of other stars: the gold (and other colored) stars we are given as children for good work, stars in pockets, stars on buttons... Here's a sample, the book's first few pages:

A star is how you know it's almost night.
As soon as you see one, there's another, and another.
And the dark that comes doesn't feel so dark.


The book is basically a riff on stars. But somehow, it's also a riff on comfort, and on hope.

Marla Frazee's inspired illustrations are simple, using her signature children (reminiscent of the slightly more realistic style of All the World rather than the mildly cartoonish look of A Couple of Boys Have the Best Week Ever). I can see why Frazee is Johnston's go-to illustrator.

Little kids are so cute that it's easy to make them overly adorable, but Frazee's children are appealing without being schmaltzy in that Bambi eyes, paintings-on-velvet way. This illustrator is also good at creating a multicultural cast of characters without being obvious about it.

There's a lot of white space here—or gray space, or blue space, as the case may be. Thus we are constantly, subtly reminded of how small people are compared to space and stars. I'm not sure that's specifically Frazee's purpose, but it works.

I will restrain myself from sharing more of Mary Lyn Ray's astonishingly lovely metaphors and uses for stars, but suffice it to say that her writing, like the art, is rich while seeming simple. Truly beautiful stuff.

This is the kind of book you immediately want to nominate for a Golden Kite Award for Picture Book Text, not to mention the Caldecott. Note that two other recent books edited by Allyn Johnston and illustrated by Marla Frazee, A Couple of Boys Have the Best Week Ever and Liz Garton Scanlon's All the World, both won Caldecott honor awards. Maybe this one will take the Caldecott itself.

Whether it does or not, Stars puts all those random books about night and getting sleepy to shame. It leaves you with this nice little "ahhh" feeling that only certain books can impart. I don't mind saying it: Stars is a perfect picture book. 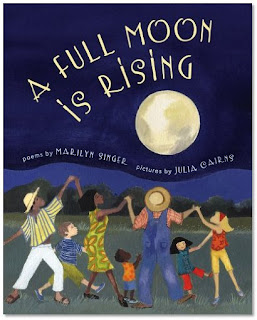 A Full Moon Is Rising by Marilyn Singer, illustrated by Julia Cairns

I got this book, which came out in May, because Marilyn Singer is such a good poet. And sure enough, A Full Moon Is Rising delivers.

The book has an unusual concept: it celebrates the full moon with children all around the world. This gives the author an opportunity to write about the full moon and also about different cultures. Be sure to look at the endpapers, which show a map of the world with the countries spotlighted in the book indicated by different bright colors. The countries are Australia, Canada, China/Hong Kong, Colombia, Curaçao (or rather, the ocean next to it), India, Israel, Mali, Mexico, Morocco, South Africa, Turkey, and the U.S. Plus a spot in space!

Thanks to Singer and Cairns, we get to visit a camel fair in India, a dreaming boy in the Sahara, a wheat field in Iowa, a sukkah in Israel, coral spawning in the Caribbean Sea, wolves howling at the moon in Canada, the ruins of a temple to Artemis in Turkey, a lunar eclipse in Mali, and the moon festival in Hong Kong. We also learn about high tide in the Bay of Fundy, a famous Colombian astronomer, and Mars's unusually shaped moon, Phobos.

The Phobos poem is one of my favorites: the address of the poem is the International Space Station, and the point of view is that of an astronaut.

Throughout the book, Singer quietly changes tone and sometimes poetry forms. But her work is consistently pleasing and informal, mostly free verse with the occasional rhyme thrown in. Singer begins and ends the book with a "Broadway Moon" making its entrance and exit in New York City. The first poem starts out:

It waits behind skyscrapers,
a brilliant actor in the wings,
ready for its monthly debut...


A very helpful one-page author's note not only introduces the poems, it shows and names the phases of the moon, as well. Then at the end of the book, a note about each poem gives further scientific and cultural information in a brief, clear paragraph. Don't skip the notes—they're terrific! For example, we learn that Phobos is scheduled for demolition one of these millenia and that flamingos migrate by night.

Julia Cairns' illustrations are in watercolor, but they are strong enough that they almost look like acrylic used with water. Her work is deliberately a bit rough-edged and casual in style, with a loose look that carries us easily from page to page. The art helps unify a book that is purposefully all over the place, covering social science, science, poetry, and bedtime in one fell swoop as it visits more than a dozen countries! 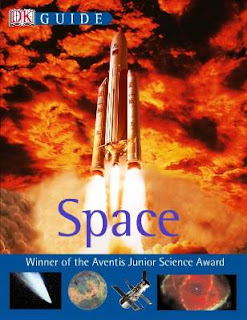 My copy is the 1999 edition, but I'm happy to inform you that there's an updated 2006 edition, no doubt corrected for the exclusion of Pluto from the planetary roster. (Apparently the slew of lay-offs over the past decade extends to planets.) I have no doubt that the new edition is just as good, if not better, than the one I'm describing. (See cover of new edition, right.)

As a teacher, I've seen a lot of space books, so why does this one stand out? Partly because of the following passage, which I'll excerpt for you. It's about picturing yourself riding in a space shuttle away from Earth (see illustration below from the "Universe" spread).

--Planet Earth: "Forty hours after launch, the whole Earth and Moon come into view."
--The Solar System: "After 27 years, you reach the edge of the solar system."
--Stars: "It takes about 500 years to reach the nearest star to our Sun."
--The Milky Way: "The Sun is one of 200 billion stars that make up our home galaxy, the Milky Way. ... Continue traveling for another billion years and the shuttle reaches the Milky Way's neighboring galaxy, Andromeda."
--The Universe: "The Milky Way is just one of hundreds of billions of galaxies in the universe. ... Your shuttle could never reach the furthest galaxies because they are racing away faster than you can travel. You would need a time machine to catch up with them." 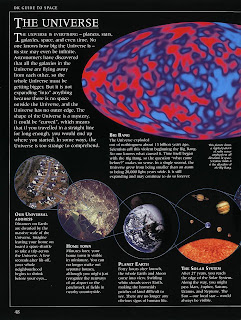 still gives me the shivers! Keep in mind that the average speed of a space shuttle is 17,500 mph, just a tad faster than the family car. Most of us, children and adults alike, truly don't understand the vast distances involved within our solar system, let alone farther out, so I appreciate this author's straightforward, riveting explanation.

There's a lot more great stuff in this oversize book, which devotes a glorious spread to each planet, as well as to the moon and things like "Star Birth," "Star Death," "Space Stations," "Satellites," "Comets and Asteroids," and "Is Anyone Out There?"

The illustrations are photos, particularly the masterpieces from the Hubble Telescope collection. You'll appreciate the size of this book when you see that it's all done on a black backdrop, with the text in white and the photos given the space they deserve. (No pun intended!)

Guide to Space is one of the most gorgeous books, DK has ever made, and it's chock full of useful, clear information, too. 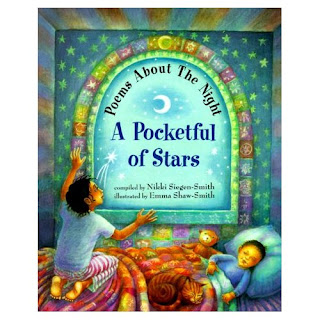 A Pocketful of Stars: Poems about the Night, compiled by Nikki Siegen-Smith, illustrated by Emma Shaw-Smith

Another 1999 offering, the two Smith hyphenates give us a well-rounded collection of poetry about the more mysterious half of our 24-hour cycle. The publisher is Barefoot Books, known for world folktale retellings and collections; their work is deliberately and delightfully multicultural.

In her introduction, Siegen-Smith speaks of the mysteries and fears of the night:
Children have mixed feelings about darkness, even when the stars are shining—noises are scary and strange creatures stalk the night. Darkness is at once fascinating and frightening. ... Poetry has a great way of making fears manageable.

There are three famous poems here: the nursery rhyme "Girls and Boys Come Out to Play," "Windy Nights" by Robert Louis Stevenson, and "Silver" by Walter de la Mare. But even these are rendered new by Shaw-Smith's illustrations, and the rest of the poems are likely to be unfamiliar to many readers. You may have heard of the poets, however: Ogden Nash, Arnold Adoff, Jane Yolen, Carl Sandburg, Nikki Giovanni, and Jack Prelutsky, for example.

Here is part of John Agard's poem, "Cat in the Dark":

But when you look
there's no cat.

Without a purr
just a flash of fur
and gone
like a ghost.


Now turn the pages. "Bats" by Prelutsky, "Sleeping Outdoors" from Marchette Chute, and "Nightmare" from Siv Widerberg. Here's a bit of Widerberg's poem:


Or Ann Bonner's poem for Divali, "Dipa," which begins:

Light the lamp now:
Make bright
the falling night
wrapped in the leaves
of autumn.


Emma Shaw-Smith's illustrations are strong and vibrant, a fitting accompaniment to the poems. In some books, the artwork competes with poems, but these spreads are satisfying, singing companions to the words. I especially like the way different spreads are different colors, each well contained, spiraling into or framing focal points, managing to draw the reader in without being static. Shaw-Smith's children and families radiate love, and they come in a rich array of colors, too.

Stars, trouble falling asleep, ghost stories, and fireflies—for a collection of 21 poems, this book manages to cover a lot of ground. A beautiful bedtime read for the 5-to-8 crowd.
Posted by KateCoombs at 9:13 AM