Rubino-Bradway flips the Hogwarts scenario on its head by creating a society a lot like ours in which almost everyone has magical powers. The handful of people who don't are hated, mistrusted, and exploited. When Abigail Hale, daughter of an elite magical family, is tested on her twelfth birthday and learns she is an ord (for ordinary), her life is thrown into chaos. The students and teachers at school shun her and she is thrown out. Two hardnosed adventurers, Barbarian Mike and his partner Trixie, try to buy Abby. Fortunately, Abby's family stands by her, unlike the families of many other ords. 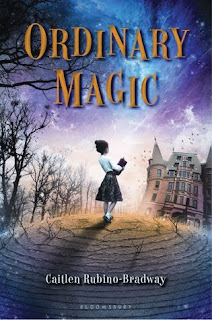 is a creative world builder, especially when it comes to the ords. In this world, an ord can cancel out magic, walking through magical security systems and wards, for example. That means an ord can cause a lot of trouble, even becoming a successful thief or, less independently, a carnival attraction. Of course, adventurers in search of magically guarded treasures like to send an ord in first—even if the ord ends up dead because of other, more physical obstacles. In this society, ords are considered to be subhuman, pariahs, and possessions.

But Abby's oldest sister, Alexa, who is one of the most powerful magic makers in the kingdom and works for the king, knows what to do. Abby must go to a special school for ords so she will be safe. There she will learn self defense, among other useful tricks for surviving in a world that treats ords very badly. Which is a really good idea, especially considering Barbarian Mike and Trixie are still trying to get their hands on an ord, whether Abby or one of the other students.

The writing is brisk and reader friendly, and the characters are a group worthy of Hogwarts. I particularly like the self-defense teacher, Becky, and an often-surly fellow student named Peter ("Peter has two modes: annoyed and golem."). Abby winds up in the clutches of the school cook, who seems determined to bring our wealthy heroine down a peg or two—as if being an ord isn't bad enough! We learn that the school is guarded by minotaurs as well as spells on the outer walls. But ultimately, it won't be enough to keep some horrific intruders out.

In Abby's world, magical creatures are just part of the scenery. Here Abby meets the minotaur who is the school's security chief:

Suddenly there was a mountain next to us, one with horns.

Mr. Dimitrios was a minotaur. A real minotaur; the hoofs, the horns, the tail, the nose ring, even the spear, it was all there. His horns were short, just peeking out of his floppy hair, which made him look young—well, youngish. Minotaurs don't really like people knowing things like how they age and how old they get. I had never seen a minotaur before except on those shows where they interview movie stars; huge and hulking in the background are the minotaur bodyguards. Which is probably why Mom and Dad were smiling so much as they shook Mr. Dimitrios's hand. If this school had hired a minotaur, even a young one, they were serious about security.

You'll find action, menace, and social struggle in this well-thought-out book from newcomer Caitlen Rubino-Bradway. Ordinary Magic promises to be the start of an intriguing new fantasy series for middle grade readers. (Ages 8 and up)
Posted by KateCoombs at 5:25 PM

I read a book with a similar premise several years ago - Missing Magic by Emma Layton http://jeanlittlelibrary.blogspot.com/search?q=missing+magic

Ordinary Magic sounds a bit more intense than this one, but it was a fun, quick read.

Is it me, or has there been a cover change for this book? I'm pretty sure I have seen a cover where the character's hair was blond instead of dark. Does anyone know how, why, or when this occurred, or have I mistaken something?

@Rina
I think covers are put together months in advance before the 'final cover' goes on, mostly to have something to put on the review copies. I talked to an author at a writing seminar who said that covers and titles can change a few times before the final book comes out.
Anyway i really got into this book. I like what Book Aunt says about 'creative world builder' - so interesting and i just loved Abbys family!
Luci

Jennifer, I'll have to look for that one. The prejudice theme is really strong in this book, so I'd like to see a different handling of the premise.

Luci, thanks for the info. Glad to hear you liked the book, too!

Ooh. That sounds very good. When reading it I wonder how everything will be since her family stands beside her. It makes me think of Hex Hall because of the whole her going to go to a place s she can learn to defend herself. It looks like it is children's which is fine but it would be interesting to see it from a teenagers perspective. Thanks for the review :D

This sounds so good! It's interesting; I've been re-reading the Harry Potter books and musing on what a story revolving around a Squib would read like - or even what would happen if someone in the magical world wanted to grow up and become a mathematician, or a plumber, or something completely ordinary. Sounds like this book might give me some answer to that supposition!