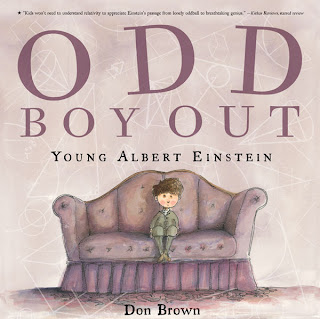 Some children, like some adults, aren't interested in stories about pirates and knights, princesses and fairies. These literal-minded sorts prefer nonfiction. My nephew is one of them—when I took him to the bookstore for his birthday, he always picked out Eyewitness books. I remember his interest in rocks and minerals and Egypt, for example, when he was six.

For this group, let alone for other children in your class or your family who will be spending years reading nonfiction for school, Don Brown's picture book biographies nicely anticipate the greater variety of fare available to older readers.

Brown's biographies are written at a level appropriate for 7- to 9-year-olds. The most well-known of these is probably Odd Boy Out: Young Albert Einstein. Unlike other Don Brown books I've read, Odd Boy Out is written in first person, a choice which gives the book a strange immediacy that suits the man who theorized about the relationship between space and time. Brown has a knack for selecting the most intriguing details, and for making his subjects seem both ordinary and extraordinary. Here is a snippet:

Young Albert does well in the school subjects that he likes and ignores the others. He likes math. Not so, Latin and Greek. When questioned in class, Albert lingers over his responses, frustrating his teachers, who prefer quick, snappy answers. And afterward the teachers see his lips move as he quietly repeats the answer to himself. Is Albert dull-witted? the teachers wonder. 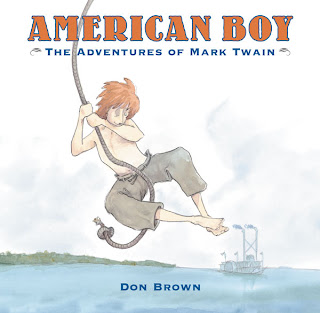 Another of Brown's biographies I've read is American Boy: The Adventures of Mark Twain. Brown quickly shows us that as a boy, Sam Clemens caused all kind of mischief, just like his alter ego, Tom Sawyer. One of his buddies was the precursor of Huck Finn:

Both Sam and Will kept a frowned-upon friendship with Hannibal's wild boy, Tom Blankenship. Tom was from a seedy family and was dreaded by the town's respectable mothers. He never went to school or church, nor need obey anybody. Sam ignored Tom's outcast reputation. "He was ignorant, unwashed, and insufficiently fed; but he had as good a heart as any boy had," Sam said. 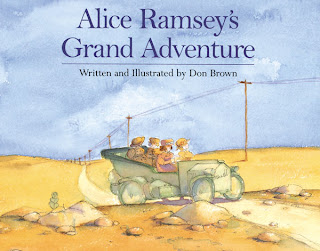 I particularly appreciated discovering Brown's biographies of unusual, adventurous women. In Alice Ramsey's Grand Adventure, we follow the first woman to drive a car clear across America—back in 1909, when most of the roads were dirt and the only road maps were for the Eastern states. Alice acted as her own mechanic on a car, which, Brown tells us, featured headlamps that had to be lighted with a match and a gas level Alice measured with a stick.

In Uncommon Traveler: Mary Kingsley in Africa, we learn of a British woman who spent her childhood in isolation, caring for her invalid mother and reading the books in her father's extensive library. Mary's father was a doctor and traveled to many parts of the world. Her parents died when she was thirty, whereupon Mary Kingsley set out to explore West Africa all by herself, finding native guides when she got there. In this fascinating book, we read of Mary's encounters with various wildlife, swamps, and African tribes.

In a swamp, an eight-foot-long crocodile "chose to get his front paws over the stern of my canoe," said Mary. "I had to retire to the bow, to keep the balance and fetch him a clip on the snout with a paddle. This was only a pushing young creature who had not learnt manners."

Don Brown has written picture books about other intriguing women who discovered fossils or flew planes back in the days when only men were expected to have adventures. He has also written about the day the American Revolution began and the sinking of the Titanic. I suppose my favorite title is Dolly Madison Saves George Washington, though I've yet to read that one. Another title of interest is One Giant Leap: The Story of Neil Armstrong. 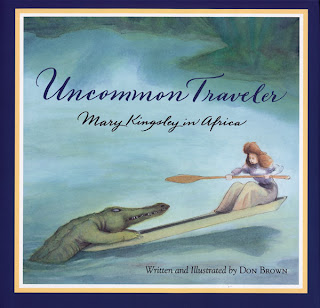 Now, a question that comes up in connection with these books is the quality of the author-illustrator's artwork. Brown's watercolors are soothing, but sometimes simple to the point of being bland. For the most part, they seem to suit the books, though they lack the kind of dazzling craftsmanship we've come to expect from illustrators working in the field today. Occasionally, Brown's artwork pops, however. For example, the illustrations in Odd Boy Out are uniformly good, in particular a spread featuring Albert Einstein pushing a baby buggy beneath a spacescape spinning with equations.

More important, the author's choice of subjects and the way he tells these true stories will make his books an asset to your school or home library. Relatively speaking, there just aren't enough picture books out there for young nonfiction aficionados, although the science side of things has improved markedly in the last decade or so. For the budding student of history and history makers, Don Brown's biographies further fill the gap.

Today's Nonfiction Monday is being hosted by Diane Chen on her School Library Journal blog, Practically Paradise. Link through to find other posts on nonfiction for children.
Posted by Kate Coombs at 7:39 AM

That Albert Einstein book has a wonderful cover. I've never read any of Brown's books, but now I'm curious. I'll have to look for them.