A Review of Magic Under Glass by Jaclyn Dolamore

Steampunk meets Jane Eyre in this first book by Dolamore, who also throws in some fairies. We eventually learn that since the last Fairy War, the Sorcerer's Council has divided into two factions, with the enlightened previous leader of the council missing under suspicious circumstances. The new leader, Soleran Smollings, has a small mind—he is prejudiced against the fairies who live in the next kingdom over and against people like our heroine Nimira, a dancer from the Arabian-type land of Tassim. 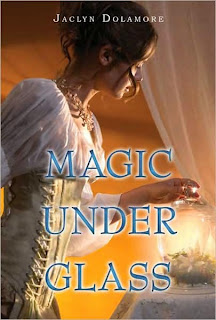 Nimira is living hand-to-mouth as a "trouser girl" in a dance hall in a fantasy city resembling nineteenth-century London. Then she is chosen by the aloof and handsome Hollin Parry (AKA Mr. Rochester) to sing with his expensive mechanical piano player. The maids at Parry's estate whisper that the automaton is haunted, and in fact, it has scared away previous singers with its moans and imploring looks. Clever Nimira suspects there's more to the situation than a mere haunting. She waits until no one's around and uses a simple code to ascertain that the pianist is actually a person named Erris who is under an awful enchantment.

Erris is only one of the house's gothic mysteries, which include a screaming woman guarded by the terrifying housekeeper...

And Parry shows signs of falling for his new singer, taking her on picnics and having her dressed in expensive ladies' gowns rather than the costumes of her native land. But Parry is basically a wimp.

You know how in movies today, they often cast twenty-somethings who are attractive, but seem to lack the depth and emotional maturity to handle the demands of their plots? Well, Dolamore's cast is a bit young that way. The peril doesn't seem quite as perilous as it should, and the romance doesn't seem as real as it should. None of this is helped by an abrupt and undercooked ending. Even books anticipating sequels need to end, coming to a natural and rewarding stop.

Still, Magic Under Glass is a pleasant YA romance with fantasy elements and hints about continuing adventures for our star-crossed lovers. The author's world building, with its threat of intrigue and war in regard to the nearby land of the fairies, is promising. Your tween or teen daughter may very well enjoy it, having read all of Stephenie Meyer's books, Beautiful Creatures, etc.

But you really should hand her some YA fantasy with a little more oomph, say, R. J. Anderson's Faery Rebels: Spell Hunter, Maggie Stiefvater's Lament: The Faerie Queen's Deception, Lisa Mantchev's Eyes Like Stars: Theatre Illuminata, Act I, or Faeries of Dreamdark: Blackbringer by Laini Taylor. Or perhaps Crown Duel by Sherwood Smith or The Enchanted Chocolate Pot by Wrede and Stevermer, to go back a bit farther.

Note for Worried Parents: There is a mention of one of the dance hall girls sharing the bed of the manager, and the point is made that men come to the dance hall to see the girls' legs rather than to hear them sing, but that's about it. Still, this book is meant for teens.

Update, 1-30-10: This book has recently been the subject of an uproar because the main character is clearly described as being dark-skinned in the text - basically middle Eastern, though in a fantasy land - but the cover photo shows a white girl. Publisher Bloomsbury is now going to reprint all of the jackets with a more appropriate look. (Bloomsbury came under similar criticism a few months ago for the cover of Liar by Justine Laralestier.) Great news for those of us who believe that books about brown people are just as appealing as books about lighter-skinned characters. A good book is a good book, period.
Posted by Kate Coombs at 6:30 PM