A Review of A Whole Nother Story by Dr. Cuthbert Soup

I'd better start at the beginning, which goes like this, in the timelessly elegant prologue by Dr. Cuthbert Soup:

If I could give you all just one word of advice, it would be... well, an incomplete sentence. Besides being grammatically iffy, I'm sure you'd agree that a single word of advice is rarely of much use. Even the phrase "Look out!" (which could prove to be life-saving advice—especially where large falling objects or missing manhole covers are concerned) is two words.
To simply shout out "Look!" to a friend as a tuba falls from a ninth-story window toward his unsuspecting head will, at best, only serve to make sure he gets a good look at the tuba before it parades him, unceremoniously, into the sidewalk.

I have to say, any author who can use "parade" as a verb in quite that way is a man after my own heart. Assuming the author is a man—who knows? A Whole Nother Story is very much in the vein of Lemony Snicket as far as having a goofy invented author/narrator, odd interpositions, and a tongue-in-cheek tone. 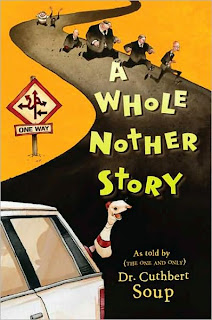 Cuthbert Soup introduces himself and then the true heroes of our story: Mr. Ethan Cheeseman and, more important, his three children, who have no friends despite being "smart, pleasant, witty, attractive, polite, and relatively odor free." But their father is one of those handy fictional characters who has invented a very dangerous machine, the subject of a search by a super-secret government agency, spies from an Eastern European country, and the representatives of an evil corporation. In fact, one of those groups arranged the death of Mrs. Olivia Cheeseman two years earlier. Which is why Cheeseman and his offspring—along with a psychic dog and a sock puppet—are constantly on the move with the not-quite-finished time/space travel (LVR) device.

Note that the Cheeseman kids rename themselves with every move, so in Chapter One they're Barton, Saffron, and Crandall, but they're Jough, Maggie, and Gerard for the rest of the book. Or rather, Gerard LaFontaine, Magenta-Jean Jurgenson, and Jough Psmythe (the latter only sounds ordinary!).

Soup is good at at creating small touches that add humorous dimension to the story. For some reason, I was especially amused by an ongoing argument among the corporate henchmen about the difference between various destructive terms, such as "crush," "squish," and "squeeze." (There's a payoff to this running joke late in the book.) The names of the different agents are also funny, as are the traveling companions of the Eastern European spy, Pavel Dushenko.

Banana guns, the appeal of dirt clods, Jough's new friend/baseball manager Elliot, and a traveling circus sideshow without a circus are just a few of the other jokes you'll come across in Soup's offbeat first outing. The book evokes the humor of writers like Douglas Adams or, according to Kirkus, Dave Barry. (Be sure to pay attention to the way the circus sideshow has humanely gotten rid of its wild animals.)

As head of the Center for Unsolicited Advice, Dr. Cuthbert Soup pauses every so often to give readers advice loosely related to the narrative. For example, we have a page titled "Some Generous Advice on Gift Giving" that clarifies:

No explanation is given for how Soup knows the things he knows about the Cheesemans, although the fugitives do drive by his center at one point. (For a fun video about the elusive Dr. Soup, visit the book's website. Or take a look at this BookPage column, in which he tells us about knowing Ethan Cheeseman back in college, among other, goofier things.)

The plot of A Whole Nother Story occasionally meanders and stalls, while characters seem to be introduced in much the same way people walk onstage to perform in a vaudeville review. But I think you'll find you won't care. This book is simply a lot of fun. And yes, it's obviously the first in a series, so there's more Soup to come. As the great Lewis Carroll might put it, "Soo—oop of the e—e—evening,/Beautiful, beauti—FUL SOUP!"
Posted by Kate Coombs at 6:54 PM