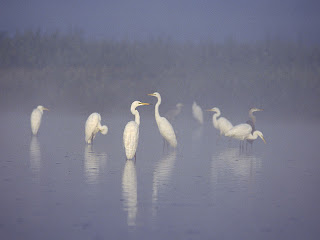 Whether your spirituality is personal, organized, or simply based on the joy of human growth, thought, and creativity, you have probably drawn on some version of faith and hope. At this time of year when so many people around the world are thinking about their purpose in life, I give you two poems, one about faith and the other a classic about hope.

Where the path closed
down and over,
through the scumbled leaves,
fallen branches,

through the knotted catbrier,
I kept going. Finally
I could not
save my arms
from the thorns; soon

the mosquitoes
smelled me, hot
and wounded, and came
wheeling and whining.
And that's how I came

to the edge of the pond:
black and empty
except for a spindle
of bleached reeds

at the far shore
which, as I looked,
wrinkled suddenly
into three egrets—

a shower
of white fire!
Even half-asleep they had
such faith in the world

that had made them—
tilting through the water,
unruffled, sure,
by the laws

of their faith not logic,
they opened their wings
softly and stepped
over every dark thing.


Hope is the thing with feathers
That perches in the soul,
And sings the tune without the words,
And never stops at all,

And sweetest in the gale is heard;
And sore must be the storm
That could abash the little bird
That kept so many warm.

I've heard it in the chillest land,
And on the strangest sea;
Yet, never, in extremity,
It asked a crumb of me.


Note: "Egrets" is from one of the best collections in my library, New and Selected Poems by Mary Oliver, Beacon Press, Boston, 1992. I regret that I was unable to represent the indentations properly. As laid out in New and Selected Poems, they stair-step in groups of four or five lines. Lacking those, I have added extra line spaces here solely in order to convey the sense of the poem's movement on the page. I want to be clear, however, that the line spaces shown above do not occur in the original poem.

It's Christmas Day, so I'm not sure how much participation to expect, but please leave your poetry links in the comments and I will post them here Friday morning till about 11:00 and then again in the late afternoon or early evening.

--Elaine Magliaro goes all out, presenting a Judy Garland video and an Elf Yourself greeting at Blue Rose Girls, along with several original poems and a lovely animated Christmas card at Wild Rose Reader.

--Diane Mayr has a Christmas excerpt (with a carol!) from The Wind in the Willows and a haiku at Random Noodling, as well as an intriguing poem narrated by Mrs. Claus from the author of "The Star-Spangled Banner" at Write Sisters.

--Mary Lee gives us holiday greetings with a traditional carol at A Year of Reading.

--Laura Shovan of Author Amok has written a post about Alice in Wonderland, featuring that wonderful poem, "Jabberwocky."

--Tricia joins us with Longfellow's "Christmas Bells" at The Miss Rumphius Effect.

My apologies to Sally and Tiel, whose comments did not show up in my e-mail for some reason. Here are their links:

--Sally shares a post about "Winnipeg at Christmas" over at Paper Tigers.

--Tiel Aisha Ansari of Knocking from the Inside has art and a poem for us, Unnumbered Releases.
Posted by Kate Coombs at 2:01 PM

Thank you for hosting on this festive Friday of poetry and good cheer.

Here's my "Christmas Tree Trimmer" at the
FATHER GOOSE blog

Thanks so much for doing the Poetry Roundup on Christmas Day!!!

At Wild Rose Reader, I have a post with several original Christmas poems and a Christmas video.

Isn't it interesting that both of your choices for today deal with birds. I've long thought that birds are the earth's loveliest creatures.

At Random Noodling I share a bit of "The Carol" from The Wind in the Willows. Also, an original haiku.

Over at The Write Sisters I have a poem about Mrs. Claus as part of my "Women of Wednesday" post.

Have a safe and happy day!

At Blue Rose Girls, I have a video of Judy Garland Singing "Have Yourself a Merry Little Christmas" and a special Elf Yourself Greeting.

Good Morning and Merry Christmas! I love your two choices for today -- perfect. Thanks for hosting in between your celebrations!

Happy Christmas. Beautiful Mary Oliver poem. My gift this year is that my daughter is finally reading Alice's Adventures through the Looking Glass! I'm sharing Jabberwocky today, including a link to the Muppets performing Lewis Carroll's poem. http://authoramok.blogspot.com/2009/12/poetry-friday-i-heart-jabberwocky.html

Merry Christmas everyone! Sally here at PaperTigers. We're in with a post at http://www.papertigers.org/wordpress/poetry-friday-winnipeg-at-christmas/

Sally and Tiel--Yikes! Normally all of these comments show up in my e-mail, but yours didn't, I'm not sure why. I just discovered them this morning. Sorry about that! The links are now up.