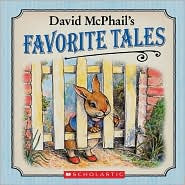 I am happy to report that this collection, first published in 1995, was reprinted a few months ago. I was recently looking for picture book versions of fairy tales written for younger readers, ones that first and second graders can read to themselves. David McPhail's Favorite Tales was one of the best I found. The author-illustrator corrals his previous books The Tale of Peter Rabbit, Little Red Riding Hood, Goldilocks and the Three Bears, and The Three Little Pigs in one volume.

Of course, the book also works nicely as a read aloud for 3- to 6-year-olds. In case you haven't run across McPhail's work, he has a recognizable style—slightly stocky characters with watchful eyes, strong ink outlines, and a home-like quality. I am particularly fond of one of his less well-known works, the illustrations for Nancy Willard's The Nightgown of the Sullen Moon. You may remember other books he has written and illustrated, such as Edward and the Pirates, The Teddy Bear, and Pigs Aplenty, Pigs Galore! Just as a good author has a clear voice, so does a good illustrator. David McPhail's artistic voice is both distinctive and pleasing.

As for the retellings, in the first selection, McPhail wisely keeps Beatrix Potter's original language. His other three stories are written in prose that's reader friendly without being condescending. You'll find that he deliberately eliminates the more violent story elements. In "Little Red Riding Hood," for example, no one actually gets eaten, and even the wolf's death is only a threat. However, McPhail makes these changes so smoothly that the adapted stories work just fine. I especially like the way he ends "Goldilocks and the Three Bears." Again, this approach makes the tales just right for primary grade readers and lap listeners. 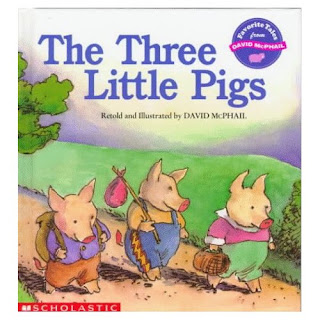 I should point out that I've seen a lot of disappointing fairy tale collections and anthologies for this age group. For a more extensive collection, I've been using A First Book of Fairy Tales, edited by Mary Hoffman and illustrated by Anne Millard and Julie Downing. But the more truncated tales in that collection seem awfully—well, truncated. Granted, McPhail's little collection is really a matter of putting four complete picture books inside two covers. (See one of the original book covers to the right.) But even as a mini collection, it's a satisfying book.

There's a sense in which a young reader might feel like David McPhail's Favorite Tales, with its comfortable heft, is an early chapter book. I know the holiday buying season is over, but I suggest you keep this one in mind next time you go book shopping. My only caution to you is that I found the book at the Barnes and Noble site, but not on Amazon or Borders—nor, oddly enough, at the publisher's website (Scholastic).
Posted by Kate Coombs at 7:23 AM