Overheard in a Bookstore 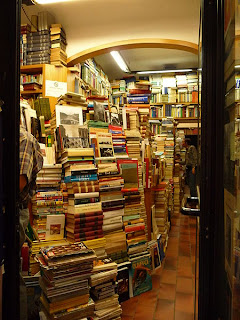 A few months ago, I was browsing in the children's section of my local bookstore when I heard a conversation between a mother and daughter. I'm pretty sure the mother was trying to interest her child in a book called The Mother-Daughter Book Club (which I have not read).

The daughter responded, "No, that's too mushy-mushy!"
Then this past weekend, I was in the YA section of another bookstore when I saw a trio of girls who looked like they were 14 or so saunter up and pause to scan the book display. The alpha girl announced, "I always judge a book by its cover."
The second girl said, "Me, too!"
And the third girl said, "Me, too!"
Ah, the interests and tastes of young readers...
Have you eavesdropped on any young readers lately? If so, what were they saying?
Posted by Kate Coombs at 9:51 AM

I've heard a lot of kids at the library do the "I judge books by their covers." However, quite a few kids have also learned that when they do so they are liable to have a librarian (me) swoop down on them without warning and subject them to impromptu book talks. And, btw, Mother-Daughter Book Club isn't exactly mushy - a bit formulaic perhaps. It's a very popular series at my library.

Jennifer, I'm sure your swoop is both practiced and exceedingly helpful. :) The MDBC series looks nice, but of course I was amused by how these kids did-or did not--select books. (I mean, the publishing world tries so hard to read the market, but I suspect the choices kids make are a little random!)

Yeah, I hear you. It's always fascinating to see what "regular" book buyers are saying... I've seen an interesting pattern that my local bookstore seems to order two special orders when I place an order for one - I guess they figure if I want it that badly, maybe other people will as well... I like that idea, of helping to shape the store's inventory!
thanks for sharing,
Namaste,
Lee