A Review of Petronella Saves Nearly Everyone by Dene Low

I have to thank Amy (RockinLibrarian) for recommending this one! The title completely grabbed me, and I felt compelled to get my hands on this Victorian-era farce, apparently the first in a series titled The Entomological Tales of Augustus T. Percival. 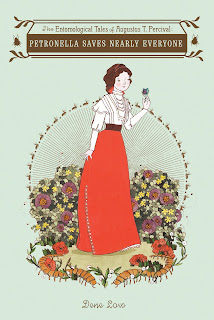 Petronella's come-out party is nearly ruined when her guardian, Uncle Augustus, swallows a strange beetle that gives him a compulsion to eat bugs. The party is further marred when two important guests go missing.

Now Petronella must solve both mysteries with the help of her dear friend Jane and Jane's handsome brother James, while trying to keep her uncle's new proclivities satisfied and a secret from Petronella's rude, greedy relatives, who would love to take over the guardianship and her late parents' fortune.

Dene Low's story is thoroughly giddy, or as Caroline Stevermer, author of Sorcery and Cecilia, puts it in a back cover quote, "Definitely frothy and categorically a romp."

I suppose I could have done without Petronella noticing James's muscles quite so often, but I decided that it was a running joke, a mockery of regency romance conventions. And really, Low doesn't let Petronella's interest in James slow her down one bit as our girl takes on any number of villains and difficult situations, including another kidnapping, this time of Jane. The word "intrepid" comes to mind, not to mention "plucky," when speaking of Petronella.

Along the way, Uncle Augustus cavorts delightfully, consuming numerous insects in a clever counterpoint to the rest of the plot. His new diet agrees with him so well that Petronella begins to wonder if she really should give her uncle the antidote, after all.

The kidnappings turn out to be related to political machinations in Panama relative to the building of the canal, and a lot of the strangeness can be attributed to insects from a remote island in that part of the world. In particular, we are repeatedly given an odd butterfly named the Tou-eh-mah-mah that becomes the villains' calling card.

There's such a farcically melodramatic tone here that at times I half-expected to hear an old-fashioned movie theater piano playing chase music and otherwise illuminating the plot. I was even reminded of Shakespeare's comedies as various characters ran here and there in multiple types of confusion.

Low takes liberal advantage of clichés in the pursuit of satire, giving us bumbling police inspectors and mustache-twirling villains along with some well-placed lines of dialogue. When she has James say solemnly, "There, I fear, is your motive. We are dealing with a tangled web of international intrigue," you can practically see the author grinning. Petronella's despicable aunts and cousins are another colorful addition to this tongue-in-cheek offering. And, considering the gentlemanly pursuit of scientific knowledge among well-to-do Victorians, Low's twist on Uncle August and his entomological studies is both bizarre and satisfying. I had a very good time following Petronella on her madcap journey, and I look forward to her further adventures in the next installment of The Entomological Tales of Augustus T. Percival.
Posted by Kate Coombs at 12:58 PM

This one looks madly delicious. I love a plucky heroine. Thanks for the juicy review :).

Hah hah! You're fast! I'm only halfway through this, myself!

And you're very welcome. :)