A Review of Legacies by Mercedes Lackey and Rosemary Edghill

Yes, it's a bunch of magical kids at a boarding school—again! But this is no Harry Potter. It's a YA series start by a couple of powerhouse adult fantasy writers, so the tone is more Forks than Hogwarts. 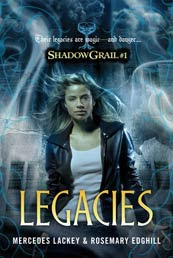 Our story begins when Spirit White's entire family is killed in a car accident that might have had an evil magical component. Spirit is told that her parents left her in the guardianship of a mysterious school. And though the White family never had much, the school appears to be made of money. Unseen school administrators buy Spirit clothes and transport her by limo and private plane, till she finally arrives at Oakhurst, a school out in the middle of nowhere, AKA rural Montana.

The headmaster is no kindly Dumbledore; he introduces Spirit and her travel companion, a boy named Lachlan (Loch), to the reality of magic by turning them into mice and himself into an owl, then terrifying them, even slashing Spirit's arm with his talons. Later encounters will lead Spirit—and readers—to wonder if Doctor Ambrosius has some kind of Jekyll and Hyde thing going.

The eeriness continues as Spirit meets other students and instructors. In addition to Loch, she makes friends with a boy who has warrior magic named Burke, an illusionist named Muirin, and a water witch named Addie. But she gradually realizes that the administrators and teachers make a point of pitting students against each other, with an "only the strong survive" mentality. So, um, are the people running Oakhurst evil? (Note that this is a thoroughly YA take on the world—the grown-ups are out to get us!)

Of course, Spirit's paranoia seems justified when she and her friends find out that students are disappearing, and only at certain times of the year—say, at summer solstice or Halloween. Together, they try to solve the magical mystery, while keeping their investigation and even their friendships under the radar of the likes of Doctor Ambrosius.

Another mystery is Spirit's magic. When she and Loch are tested, he turns out to have the magical gifts of Kenning, Shadow Walking, and Pathfinding. Spirit seems to have no gifts, which anyone who's read a YA paranormal will correctly interpret to mean that at some point, she will end up having powerful magic.

The book drags in spots, e.g., when the authors go on and on describing the school and later when the kids seem slow to figure out exactly which mythological force is menacing students. Still, it's a pretty good read. There's a little romance, a lot of suspense, and a likable heroine. Legacies is the first book in the new Shadow Grail series, and fans of Kelly Armstrong and Stephenie Meyer will enjoy following the adventures of Spirit White and her friends.

Note for Worried Parents: Teens are snatched and killed by scary supernatural creatures. The deaths are left to the readers' imagination; however, the big climactic battle scene is pretty intense. A minor character smokes, and there's a mention of drugs.
Posted by Kate Coombs at 9:47 AM

Personally i loved the book. I thought Spirits lack of power got annoying at some points, as well as her lost confidence, followed by surges of assertivness. It was interesting, and brought elements that the Harry Potter Series just didnt have. All in all, the book was amazing!

Hm this sounds like an interesting read. While I do love the Harry Potter series, it is sad that it is assumed that all wizarding series made after HP are going to be exactly like it, so thanks for clearing up that cliche.

I have finally, finally read this book. Like you, I was clammering for the kids to hurry up and figure out what was going on. I also found the last battle scene confusing to the extreme. But other than that I liked the book a good deal: a slow reveal of the darker side of a nice-seeming place, and a good treatment of a well-known trope (wizard school).