A Review of Paranormalcy by Kiersten White 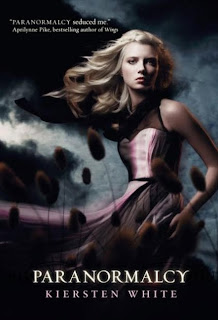 What's interesting about this book is the juxtaposition of a heavy-duty paranormal scenario with a relatively upbeat teen protagonist. Having escaped the foster care system at the age of ten, Evie thinks being raised by the International Paranormal Containment Agency is pretty cool. After all, director Raquel is kind of like a mom, and mermaid computer expert Lish makes a nice best friend, even if she is older. Evie does watch a TV series about high school kids on her computer and wish she could go to a normal school, but then, she's too busy going on missions for the agency to have time for that.

Evie has a unique ability. She can recognize any supernatural entity, no matter how well their nature might be disguised. The agency sends her out with fairy guides to locate rogue paranormals, who can then be "contained." It never occurs to Evie that this might be a harsh approach, or that she herself might be considered something other than human. About her only problem is a male fairy named Reth, her high-handed sort of ex-boyfriend. He believes he has a right to her, and he also has ominous plans for Evie that he's too arrogant to share. Although Evie has the equivalent of a restraining order against him, she's beginning to get the feeling the IPCA doesn't have nearly as much control over the fairies as they seem to think.

Then a teenage shapeshifter is captured sneaking around inside the IPCA compound, and Evie is fascinated by him. Someone her own age, finally! Okay, so maybe he puts on a different face every time she does her own sneaking so she can visit him in his cell, but Evie can see past all of that to his true form. Little by little, she comes to trust Lend, despite Raquel's harried and unsuccessful efforts to keep her away from him.

Only something terrible is happening, and it seems to be connected to Evie somehow. Paranormals are being killed, consumed by a fiery entity that has taken an interest in Evie. But why? When the center comes under attack, Evie escapes with Lend, trying to find answers from a whole different segment of the paranormal world.

Now, I have to admit, it's getting hard to tell some of these paranormal suspense love triangle books apart. Then again, if you adore this subgenre, you have a wealth of choices right now!

So how does Paranormalcy distinguish itself? The book's strength is definitely Evie and her narrative voice. She's a pretty hopeful kid for someone in her situation. Sure, we get her doubts and pouts, but she's also kind of funny, and she makes the best of everything that comes her way. You might find yourself cheering for her relationship with Lend, but more than that, you'll be cheering for Evie herself as her odd life gets even odder.

Of course, for those of you who prefer the fairy bad boy to the shapeshifting boy next door, there's always Reth.

I will mention that some plot points are a bit uneven; e.g., the opportunity for Evie to attend prom like a normal girl really feels shoehorned in. But I like White's style, and I'm looking forward to seeing what she does with the next book in this series.

(Visit Kiersten White's blog to read a very fun post that will give you a taste of her voice. In "You Can't Kill the Undead: Or, Paranormal Romance Isn't Going Anywhere," the author "perform[s] literary analysis on an entire genre.")

Note for Worried Parents: This book for teens has some violence, including murders. It shows a little kissing with a nice boy and pressure from an ex-boyfriend who seems emotionally abusive.

FYI: I requested an ARC of this book from HarperCollins. Paranormalcy will be published on September 21, 2010.
Posted by Kate Coombs at 8:32 PM