A Review of The Kneebone Boy by Ellen Potter 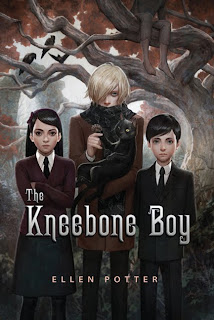 Let me just start by saying I get such a kick out of Potter's style. Here's how her new book begins:

There were three of them. Otto was the oldest, and the oddest. Then there was Lucia, who wished something interesting would happen. Last of all was Max, who always thought he knew better. They lived in a small town in England called Little Tunks. There is no Big Tunks. One Tunks was more than enough for everyone. It was the most uninteresting town imaginable, except for the fact that the Such Fun Chewing Gum factory was on its west end, so that the air almost always smelled of peppermint. When the wind blew just right you could think you had been sucked down a tube of toothpaste.

I was the one voted to tell this story because I read the most novels, so I know how a story should be told. Plus I'm very observant and have a nice way of putting things; that's what my teacher Mr. Dupuis told me. I can't tell you which Hardscrabble I am—Otto, Lucia, or Max—because I've sworn on pain of torture not to. They said it's because the story belongs to all three of us, and I suppose they're right, but it seems unfair since I'm doing all the work. No one can stop you from guessing though.

My instinct is to tell you that this book feels like Coraline meets The Penderwicks, a fair assessment in a lot of ways. Maybe with a little Lemony Snicket thrown in for good measure. The Kneebone Boy is dark and wry and clever and convoluted—which is pretty much what these three kids are like.

Otto hasn't spoken in years; he communicates with an invented sign language that only his siblings understand. Otto always wears a black scarf that his missing mother left him and collects oddities such as a two-headed cornsnake. Lucia (pronounced the Italian way!) uses her imagination to get them in trouble, though the boys seem capable of finding trouble without her help. And Max knows so many things that he gets on people's nerves just a tiny bit even though he isn't actually a show-off. The author cheerily makes all three kids good-looking, but then, they are still social pariahs because they are just plain weird, plus there are some creepy rumors floating around about what happened to their mother.

As for their father, every so often he goes on trips to paint portraits of eccentric deposed royals, leaving his children with an awful woman who makes Max squeeze the oily cyst on her neck. But this time, they are going to stay with their aunt in London. Only—she isn't there. Instead of going back to Little Tunks, the three kids stay in the city. They soon have a scary run-in with a Londoner and decide to make their way to a seaside village in search of their great-aunt, who turns out to be a colorful young woman renting a folly that's a replica of Kneebone Castle for the summer. The folly is only accessible by aerial bicycle. (How else would you cross the moat?)

Which only begins to hint at the over-the-top details in this book, not to mention the shivery gothic mysteries. The biggest one is what happened to the kids' mother. Why did she leave, and where is she now?

The Kneebone Boy simply oozes atmosphere. I mean, look at the cover! Isn't it gorgeous? I was shocked to discover that the book is not a paranormal or a fantasy, after all, although some of the elements are pretty outrageous. Frankly, The Kneebone Boy seems to be crying out for some magical murk. Well, I suppose there is one little bit, but the author tosses it in and basically announces, "Here, I'll bet you want a ghost." Not quite what I had in mind!

As you can tell from the excerpt above, the Lemony Snicket part of the book is the way the "writer" often addresses the reader. You may find this fun, or you may find it derails the story in spots.

Then, after a good many twists and turns, a veritable funhouse experience, the ending feels a little anti-climactic because, well, All Is Explained. And this is the kind of book where you kind of wish it weren't.

And yet, and yet—Potter has created three marvelous characters, and her style alone is worth the ride. (This American author does British quirk better than most Brits, up to and including mocking Americans and their bizarre love of peanut butter and jelly.) Besides, you've gotta love the surreal little version of the real world she has concocted. Hmm. Maybe The Kneebone Boy is magical realism. Or something close to it. In any case, I hope the author writes another book about the unusual Hardscrabble siblings!

Note for Worried Parents: This book is middle grade fiction. There is a threat of violence in London that's kind of intense, a mention of boobies, and a serious plot thread involving the absent mother. The Kneebone Boy should be fine for most 9- to 12-year-olds.

FYI: I requested a copy of this book from the Amazon Vine program. The Kneebone Boy will be available on September 14, 2010.
Posted by Kate Coombs at 8:21 PM

You didn't steer me wrong with The Grimm Legacy... sounds like I'd better seek this one out, too! Thanks for posting these great reviews.

I so want to read this one. That is a crazy good cover.


Doret--"Crazy good cover": that's it exactly! I swear, I saw the cover and had to have this book. It was just an added bonus that I like Ellen Potter's Olivia Kidney books AND Spilling Ink.

I ordered the book and had it shipped to my 9 year old grandson. He loves the book and has even been asking his grandmother the meaning of some words that he doesn't know and he now knows about dictionaries. But above all, the book grabbed his interest. He loves Pokemon video games but he loves a good read even more.

Thomas--It's so nice to hear a tale from the trenches about how much an actual kid likes a book. Thanks! (That's great about his interest in the meaning of the unknown words, as well.)