While I'm not the world's biggest fan of historical fiction, I'm definitely a Jane Austen fan, and I know I'm not alone in this. So I'm happy to see that various authors have found ways of reinventing girl-power fiction from the Victorian/Edwardian era, and I'm not even talking about Seth Grahame-Smith's Pride and Prejudice and Zombies. (See my neo-Austen riff which includes his book.) 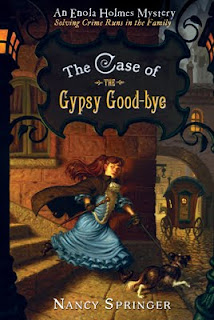 The Case of the Gypsy Good-bye is a book from Springer's reinvention of the Sherlock Holmes stories, part of a series that's the best new take on Holmes since Laurie R. King introduced Mary Russell to the great detective for adult readers. Nancy Springer has envisioned a much younger sister for Holmes, a fourteen-year-old girl he and Mycroft try to pop into a boarding school when their mother disappears. But Enola, who's just as bright as you'd expect Sherlock's sister to be, takes to the streets of London instead. There she crafts a new identity for herself, becoming what she calls a "perditorian," a private detective specializing in finding lost people. Of course, more than anything, she'd like to find her own mother—a theme that runs through the series.

In this seventh and final book, Enola searches for the missing Lady Blanchefleur del Campo, even as her older brother searches for her yet again. In the past, Sherlock and Mycroft tried to find Enola in order to put her in school, but as Sherlock's path has crossed with hers over the course of six books, he has acquired a great respect for his sister's wits as well as her goals. Now he wants to find her because he's received a special package from their missing mother, one whose message only Enola can decipher.

Enola is a remarkable narrator and heroine, calculating, organized, and daring, a female Sherlock with youthful exuberance to lend her a fresh feel. Here is a sample of how she thinks and acts:

I had found out what I needed to know, namely that people survived the tunnels without being crushed by trains, as evidenced by the presence of the tosher. I needed shabby clothing, a lantern, a large stick, and a Cockney attitude before I again attempted to explore these underground passages in hopes of hypothesizing where the Duquessa might have been taken. With my heart still thumping from the encounter with the hostile troll of the tracks, I reclaimed my valise from the station-master, then fled upstairs, glad to reach the light and air (comparatively speaking) of Dorsett Square, through the middle of which ran Baker Street.

Keeping a cool head as always, Enola manages to handle her older brothers while tracking down the missing woman. She also finally gets some answers about why her mother abandoned her. I highly recommend this entire series for bright young readers who will be drawn by the intelligence of both the language and of the main character. I should note for history buffs that Springer paints a marvelous picture of turn-of-the-century London, as well.

Aside from the now-classic Nancy Drew books, there are relatively few strong mystery series for middle grade readers these days. Peter Abrahams' Echo Falls books come to mind (Down the Rabbit Hole, etc.), and I like Dorothy and Thomas Hoobler's mysteries set in 18th century Japan (The Ghost in the Tokaido Inn, etc.), not to mention Carl Hiaasen's ecological suspense titles for kids (Hoot, etc.). In addition, Karen Karbo's underappreciated Minerva Clark mysteries are YA, but would be great for many in grades 4-6 as well as middle schoolers (though a few bad words might put you off, e.g., "bitch").

And, as Booklist reviewer Ilene Cooper puts it, "The series that features Enola Holmes, the (much) younger sister of Sherlock, continues to be flat-out among the best mysteries being written for young people today."
Posted by Kate Coombs at 1:07 PM

Wow- This book sounds totally amazing- I havent been able to get ahold of it yet, but I hope that the conclusion to the series is well thought-out.

My favourite parts were always the times when Enola encounters Sherlock, so Im hoping there are plenty of those!!