Brock Cole may be best known for his young adult novels, most notably the scapegoat survival classic The Goats and, more recently, Celine and a gritty psychological drama, The Facts Speak for Themselves, but I am a fan of his picture books, which tend to combine folklore traditions with a bizarre and appealing sense of whimsy—yet also end up being surprisingly touching. Language-wise, each story is clean and well crafted. Though the style isn't showy, if you take a look you'll find that each word and phrase is just right. What's more, Cole does his own illustrations, sure-handed watercolors that seem like the love-child of Quentin Blake and Charlotte Voake.

Here are four selections from this very talented author-illustrator. 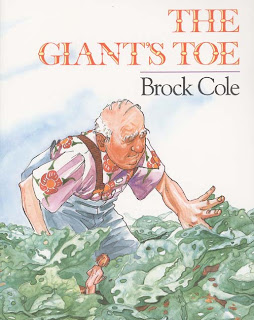 A thoroughly odd take on "Jack in the Beanstalk," this is the story of a giant who accidentally cuts off his toe with a hoe, and the hoe turns into a very small boy. The giant and the toe don't exactly get along:

But when the pie comes out of the oven, the giant is aghast to discover that the toe is still alive, and he has just baked his hen that laid the golden eggs. So the giant tries again, only to lose his singing harp to the intrepid toe.

And just when you think you know where this story is going, a mean-looking boy named Jack shows up at the door...

I suspect 5- and 6-year-old boys will particularly like this one. As for you adult readers, the ending is subtly tender, its emotional content punctuated by the last two illustrations. For "[the giant] and his toe lived happily ever after, just as they should."

Note for Worried Parents: There is the cut-off toe and the threat of fairy tale cannibalism here, also, the toe is a naked boy (about age 8?), and you can see his vaguely drawn little penis in a few of the pictures (much like in Sendak's The Night Kitchen). 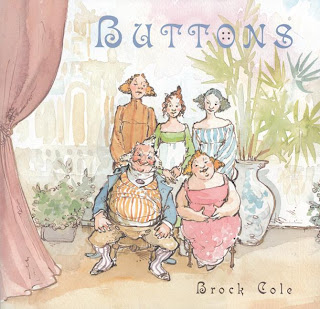 This giddy original folktale is about an old man whose pants pop, so he loses all of his buttons. Which turns out to be a dire emergency:

Once there was an old man who ate so much his britches burst and his buttons popped one, two, three, into the fire. "Wife! Wife!" he cried. "We are undone! My britches have burst and my buttons are burnt, every one!"

His wife tucks him in bed and enlists the help of their three daughters, who are determined to solve the problem. Of course, like the problem, their proposed solutions are completely farcical, a fact young readers should enjoy. The first girl plans to go out and find a rich man to marry, then demand that he buy her buttons. The second girl plans to dress as a boy and join the army because everyone knows that soldiers' uniforms have lots of buttons. The third girl says she's going to go outside and hold out her apron, waiting for buttons to fall from the sky like rain.

The older girls' plans don't work out, though they do end up finding nice husbands along the way. Could it be that the youngest daughter will actually save the day, and her father's britches? 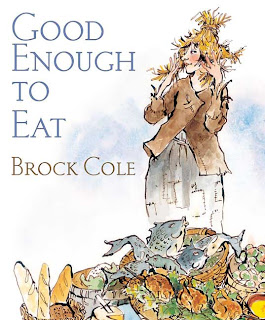 Brock Cole has a bone-deep affection for the outcast, as you might have guessed if you've read his YA novel, The Goats. Here he tells us about a girl so poor she doesn't even have a name. The story begins:

But things change when a giant Ogre comes to the gate demanding one of the town girls for a bride, or he will knock down the town. "Oh, he was a foul creature! His breath smelled of graves, and he had rats in his hair instead of lice. What could be done?"

The townspeople quickly figure out that the best candidate for the job is the nameless beggar girl. (Cole presents the "vote" on the matter in an especially funny way.) However, when the giant hears she is called "Scraps-and-Smells," he is angry and punishes the town. They try again, sweetening the deal with a bag of gold. Eventually the girl takes advantage of them all and wins, not only the town's safety, but her own freedom, riches, and even a friend. Cole creates inventive wordplay using the giant's complaint of "Not good enough!" and the girl's new "name," Good-Enough-to-Eat—but he is really talking about the worth of the individual, even one considered worthless by everyone around her. 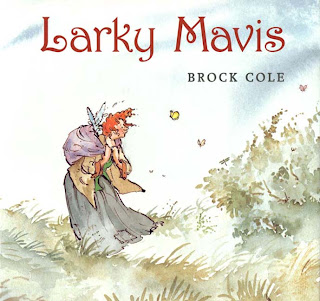 This is my favorite of Cole's picture books. Another outcast, Larky Mavis, is considered mad by the people of her town. Here is how the story starts:

Down the road came Larky Mavis, mooning about, mooning about.
"Whoops!" said Mavis, and up she went and down she came.
"Who tripped me?" she called in a brave voice.
Right in the middle of the road were three peanuts.
"A fine thing, tripping a poor girl," she said. "I'll eat you up."
The first tasted like liver and onions.
"That's good," said Mavis.
The second tasted like bread pudding.
"That's good," said Mavis, and cracked the third peanut wide open.
"Well!" she said, laughing. "I won't eat you!"

The only people who take Mavis seriously don't appear in the text. They are three children who follow Mavis around town, helping her pick berries in the hedgerows and watching her antics with loyalty as well as interest.

The baby becomes larger still, and "People began to talk." The townspeople, particularly the schoolmaster, the parson, and the doctor, try to take the creature away from Mavis. And then the child itself intervenes, protecting its Ma. Because Mavis's foundling really does have wings...

It amazes me how much Cole packs into a single book, beginning—and perhaps ending—with the rich character he creates in a homeless woman named Mavis. Consider, too, the power of the book's final phrase. Larky Mavis is a strange and lovely story, one for your family to talk and think about for days. It can be read as a meditation on reason and faith, though it doesn't have to be. Like all of Cole's picture books, it manages to be both funny and serious, fantastical and heart-rending and utterly unique.

Brock Cole's stories may not be middle-of-the-road enough for every reader, but for poignancy and originality, they can't be matched.
Posted by Kate Coombs at 6:58 AM

I have always loved The Giant's Toe! Thank you for introducing me to more Brock Cole titles.