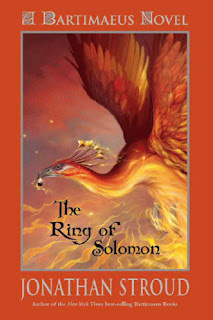 Travis of 100 Scope Notes has posted his list of the best 20 children's books of 2010, and a fine list it is, indeed! Of course, that got me thinking about my own best reads this past year. I'm not going to name 20, and you should know by now I have a fantasy bias, but that said, here are my top 10, approximately in order (lots of ties!). The only one I haven't reviewed yet is The Ring of Solomon (reviews linked below).

1. I Shall Wear Midnight by Terry Pratchett (YA)
2. A Conspiracy of Kings by Megan Whalen Turner (MG)
3. The Night Fairy by Laura Amy Schlitz, with illustrations by Angela Barrett (MG)
4. Bink and Gollie by Kate DiCamillo and Alison McGhee, with illustrations by Tony Fucile (Easy Reader)
5. The Ring of Solomon by Jonathan Stroud (MG)
6. Dash and Lily's Book of Dares by Rachel Cohn and David Levithan (YA)
7. Black Hole Sun by David Mcinnis Gill (YA)
8. The Boneshaker by Kate Milford (MG)
9. The Dreamer by Pam Muñoz Ryan, with illustrations by Peter Sis (MG)
10. The Crowfield Curse by Pat Walsh (MG)

Then there are the many terrific books I rather ruthlessly left off the list: Scumble by Ingrid Law, Mockingjay by Suzanne Collins, The Incorrigible Children of Ashton Place by Maryrose Wood, Behemoth by Scott Westerfeld, Plain Kate by Erin Bow, and the graphic novel Hereville by Barry Deutsch, to name a few. I also devoured N.D. Wilson's entire 100 Cupboards trilogy with great relish this summer. Thanks, Mr. Wilson! And let's give a shout-out to poetry: I hope you've read Ubiquitous and Dark Emperor and Other Poems of the Night by Joyce Sidman, as well as Mirror Mirror by Marilyn Singer.

I suspect the only real dark horse on my list is The Crowfield Curse, a fine book I feel has been underappreciated, though it does pop up with an awards nomination here and there. I will note that I'd rather see an astonishing book that takes risks and has a couple of flaws than a book that plays it safe and makes fewer mistakes. This is one reason I liked Flora Segunda by Isabeau Wilce, for example. Still, though there aren't many perfect books out there (Charlotte's Web, maybe?), all ten of the books I've listed are very well written. Each has its own particular strengths and type of appeal, but I can tell you that the two I consider the most perfectly crafted—roundly, like circles—are The Night Fairy and Bink and Gollie. Richest character work? That would be I Shall Wear Midnight and A Conspiracy of Kings.

Dash and Lily wins the award for funniest, also for most off-the-wall riff on romance and relationships. I should add that Bink and Gollie is very funny in an understated, Winnie the Pooh or Frog and Toad way. The Boneshaker and Black Hole Sun are the most atmospheric, though in rather different ways. More solid characterization, to boot. And while The Boneshaker is more eerie, sci-fi thriller Black Hole Sun wins the award for most pulse-pounding. Dreamer gets my vote for most poignant and, yes, poetic, while The Ring of Solomon combines humor and adventure completely deliciously; I liked it even better than the author's previous trilogy. Finally, The Crowfield Curse is a subtle yet powerful new take on historical fantasy, with a wintry medieval abby setting that will not only chill you, but will leave you feeling like you'll never have another good meal in your life.

December is the time of year for such lists, of course. Here's a look at the Horn Book's best of 2010 as summarized on Read Roger, along with the Kirkus lists of best books for children and teens in 2010. And, in case you haven't been following along, here's a nice slice of the Heavy Medal Mock Newbery discussion; be sure to look at the comments, especially Jonathan Hunt's tally and notes about 3/4 of the way down. To sum up, One Crazy Summer by Rita Williams-Garcia, A Conspiracy of Kings by Megan Whalen Turner, Joyce Sidman's poetry collection Dark Emperor, and a nonfiction book called Sugar Changed the World by Marc Aronson and Marina Budhos seem to be favorites among a number of readers and reviewers.

What are the best books for children and teens you've read this year?
Posted by Kate Coombs at 4:51 PM

I've been working on my list...s in spare moments this past week. I haven't got a lot of spare moments (this is one of them, and here I am reading your list instead), but I keep thinking about the lists, and moving things around, and making up new rules so as to fit as many different titles on as possible, and wishing I had more spare moments so I could spend all my time actually TYPING these thoughts...

I've been thinking of including a "Books I've WANTED to read this year but still haven't yet" list, which includes your #1 (which I'm hoping to get for christmas actually) and #8, and I've been reminded by all the reviews for #5 that I still need to read that original series... how on earth can a person keep up with so many good books?!

Amy--I am happy to inform you that you don't need to read any of the other Bartimaeus books to enjoy The Amulet of Samarkind! And you've got to admit, the "so many good books" problem is a nice one to have...

I'll confess that I slammed this list together in record time, going with my gut after a quick look at my blog archive for the books I reviewed this year, plus I checked the lists I linked in this post in case I forgot something major. So, no rules to speak of!

Yay for A Conspiracy of Kings being in your list! I'm excited to read The Ring of Solomon because I loved the Bartimaeus Trilogy. I'm glad Jonathan Stroud decided to write a prequel of sorts because it can serve as an introduction to those who haven't read the series. I also want to read Dash and Lily's Book of Dares! It seems like a perfect holiday read. I just need to track down a copy somewhere.

As for my own list, I don't think I can narrow down my favorites to just 10! So many good books this year.

Thanks so much for including Black Hole Sun in your list!

Chacic--Hope you get your hands on those soon; enjoy your holiday reading!

And David, that's what you get for writing such a cool book. You're very welcome. :)

I don't know that I could limit myself to ten. I've been thinking about it but am nowhere near ready to post it yet. I think it's going to have to wait until next week.

I loved the 100 Cupboards trilogy too.

You'll notice I mitigated the harshness of a mere 10 choices by throwing in some additional titles in my notes after the list.

Great list of books, thanks! One I wish I saw on there is The Thanksgiving Coat by Elizabeth Hoadley. She wrote the book alongside her 5-year old daughter who illustrated all of the pictures. A very well-done story about helping others in need and giving back.

Thank you, Clark. And that sounds like a very sweet project.