A Review of The Painted Boy by Charles de Lint

Charles de Lint is one of a number of adult fantasy writers who are now writing for teens. You should know that Canadian writer de Lint is a very big name in fantasy, having almost single-handedly invented the subgenre of urban fantasy with his Newford stories, in which the world of Faerie overlaps—ruthlessly, if not chillingly—with the humans in a modern city based on Ottawa. (Actually, if he's the father of urban fantasy, then Terri Windling would be the mother!) A talented Celtic folk musician, de Lint often incorporates music and musicians into his work. 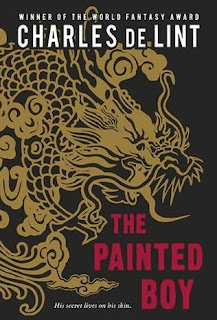 I've found that De Lint's books and stories for adult fantasy readers are sometimes slow going, but they are also thoughtful and beautifully written. I liked his earlier YA novel, The Blue Girl. Two other YA novels, Little (Grrl) Lost and Dingo, were nice, but not quite as good. His new book, The Painted Boy, sends a Chinese American teen with a secret dragon heritage from Chicago to the Southwest. He winds up in an Arizona border town called Santo del Vado Viejo. As a member of the Yellow Dragon Clan, James Li has special powers, but his tough little grandmother didn't teach him how to use them. Instead she taught him focusing exercises which do not seem especially helpful to James when he begins to run into trouble.

James has barely hit town before he is shadowed by gangbangers, and he finds shelter at a small restaurant named La Maravilla with a little help from a girl named Rosalie. She turns out to be friends with a girl named Anna who's the lead singer in a band called Malo Malo—and James is attracted to Anna. But before he can settle in, getting a job at La Maravilla, he has to deal with the adult leader of the Presidio Kings, El Tigre. That huge dragon art on James's back isn't a tattoo at all; instead it reflects his nature as a son of the Yellow Dragon Clan, and his very presence in town is a challenge to El Tigre. James establishes a temporary truce with the man, but eventually things fall apart and James has to take action.

In the meantime, James is learning more about his dragon self. For example, he practices walking in the magical desert world that lies just next to his own, led by a giddy little shapeshifter who's a jackalope girl. He meets a rattlesnake woman with uncertain loyalties and another old woman who used to run the whole region until El Tigre came along and messed things up, among other supernatural people. So what is James's role in all this, and to what extent should he get involved?

I was pleased to note that almost the entire cast of this book is Latino or Asian, though de Lint doesn't make a fuss about that. It's just such a boon to librarians and parents looking for fantasy that shows a broader world! And even though some of the characters are gang members, many more are not. De Lint has a gift for creating likable teen characters, let alone colorful secondary characters. In addition, the desert setting is striking and well used, as is the music of Malo Malo, described here:

Hector began a scratching counter rhythm on his turntable, sounding like chickens pecking in a yard, then suddenly a spot came on to capture Ramon and Gilbert at the front of the stage, sharing a mic. They started with a flourish on their trumpets and played some jaunty mariachi tune until Gilbert backed away, switching to long, slow notes, while Ramon started rapping the story of how the band came together.
The spots weren't on Anna yet, but her guitar could be heard weaving a delicate harmony to Gilbert's trumpet. The band hit the chorus with everybody singing, then the music stopped for a moment before it
came roaring back in double time, the trumpets high and sharp. The spotlight touched Anna just as she broke into a killer guitar break that sounded like speed-metal flamenco.

Malo Malo's music, along with James and Anna as a couple, evoke the growing mix of cultures that is life in so many urban centers these days. Now, Chinese and Mexican may seem like an odd combination, but then, I live in L.A., and I used to work near a restaurant that featured both soul food and Chinese food.

Message-wise, The Painted Boy ends up being very anti-gang. But its preachy moments aren't especially distracting; you'll be too busy cheering for James to figure out how to use his powers so he can protect his new friends from the bad guys. This is basically his coming-of-age story. And if the narrative has an occasional slow spot, overall it flows just fine. Because after 60+ books and a whole lot of music and imagination, Charles de Lint really knows how to tell a tale.
Posted by Kate Coombs at 7:38 PM

Ooo, sounds like something I will want to check out. I really enjoyed The Blue Girl but wasn't as keen on Little (Grrl) Lost, but it sounds like I might enjoy this one more. Thanks for posting about it!

Hmmm, I felt exactly the same way about de Lint's previous ya, although I never got around to reading Dingo. I'll have to bump this one higher on my list, it sounds as good as Blue Girl.