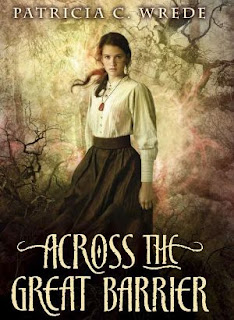 Across the Great Barrier by Patricia Wrede

In 2009, I reviewed Book 1 in Wrede's Frontier Magic series, Thirteenth Child. I thought it was very good, especially the idea of adding magic to the settling of the West. But the book's strengths were sometimes overlooked because of a controversy: Wrede did not include Native Americans in her alternate history, and she caught a lot of grief for it. (We can assume, however, that she would have caught a whole different batch of grief for her portrayal of them had she left them in.) I read one of the later interviews with this author during the book promotion period, and she was so fed up with the whole thing that when she was asked if she wanted to talk about it, she replied tersely, "No."

Anyhoo, here's Book 2! Across the Great Barrier doesn't have quite the same sense of emotional tension that characterized the first book, but it is nevertheless a good story. As the book begins, Eff is no longer being persecuted for being a thirteenth child; in fact, she has become something of a hero, which is surprisingly hard on her golden boy twin brother, Lan.

Perhaps that explains why he does something at school that causes all kinds of trouble. Lan also fails to understand why his sister is more interested in studying Aphrikan magic than Avrupan (British/European) magic. As for Eff, she is focused on why she has so much difficulty mastering simple, useful spells. But it is only when Eff goes across the Great Barrier into the wilderness with a research team that she discovers true danger and learns how to handle herself in unexpected situations.

The odd thing about this series is that it has no human villain to contend with—instead, Eff and her friends and family must deal with the strange magical creatures and other, more ordinary threats that lie in the untamed lands of the West. For this reason, I suspect the Frontier Magic books will have more appeal to serious fantasy fans than to those who like their good and evil served up in the form of fluffy unicorns and black-cloaked villains. 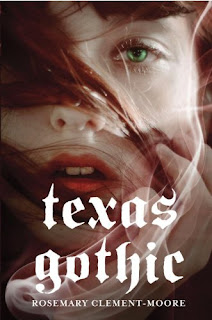 A few years ago, I reviewed Book 3 in the Maggie Quinn: Girl vs. Evil series, Highway to Hell. Clement-Moore gives us a new character in this series starter, Texas Gothic. Amy Goodnight is a member of a family of witches, but she tries really hard to be normal. However, when her aunt leaves her in charge of her aunt's ranch, together with her witchy mad scientist sister, Phin, Amy gets a lot more magic than she bargained for. It seems the ranch is haunted, and not by Casper the Friendly Ghost, either.

On top of everything else, a teenage cowboy from the ranch next door is exasperatingly cute and inclined to pick a fight. He doesn't like the fact that Amy's aunt won't give his family an easement in order to build a much-needed bridge. Then there's the archaeological dig happening over on Ben's father's ranch. Of course, you would expect some girl-clashes-with-boy trouble after this little meet cute: Ben's cow attacks Amy's car, and Amy comes running out in her underwear to rescue it. Naturally, they quarrel, whereupon Ben dubs her Underwear Girl. But Ben and Amy will have to get past their initial hostility if they want to combat evils ancient and modern...

The nice thing about this author's books is that they have the kind of lighthearted verve you would expect from a Meg Cabot, yet they have a flair of their own and some clever paranormal plotting that's a decent four or five steps up from the Scooby Doo mysteries. Furthermore, how can you not like a ghost-hunting girl who drives a Mini Cooper and nicknames it Stella?

Note for Worried Parents: Texas Gothic is a book for teens. Yet other than the abovementioned underwear encounter and a little kissing much later in the book, there's nothing of major concern. Oh, there are ghosts and some peril. We've definitely got peril!
Posted by KateCoombs at 4:00 PM

I wasn't as crazy about The Thirteenth Child as I was about some of Wrede's books from when I was younger. The pioneery setting isn't my favorite (alas, alas!). I hope she's done with this series soon and on to something new.

Jenny--Well, that's true. I think the series is just a little dry somehow and lacking in drama. This is especially disappointing because I feel the basic premise is rich with potential, and I do like Eff.

I quite liked Thirteenth Child, I think because it was so different. I didn't know the second one was out yet. *happiness*

Rosemary Clement-Moore sounds like a lot of fun. I'll have to check her out.