Announcing the second How-Did-I-End-Up-with-Two-Copies-of-This? Book Giveaway, wherein I reshelve yet again, ponder the limitations of having a mere 13 bookshelves in a two-bedroom condo, and wonder if it's truly possible to have too many books. 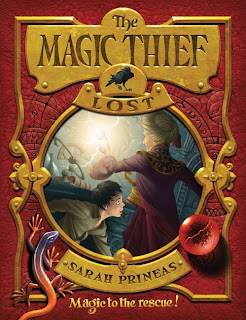 I will therefore send the winner of this giveaway three (3!) books, one clean new hardcover copy of each of the following, which are all very good:

--Theodosia and the Eyes of Horus by R.L. LaFevers (reviewed here, the third in an adventuresome series about a girl with a knack for curse detection whose parents run an antiquities museum in London in the early 1900s)
--The Magic Thief: Lost by Sarah Prineas (the second in a series about a boy who, in Book 1, picked the pocket of a wizard and became his apprentice; now he runs away from home and comes up against a sorcerer-king)
--A Curse Dark as Gold by Elizabeth C. Bunce (a rich, dark retelling of the story of Rumpelstiltskin, this Young Adult book is set in England at the beginning of the Industrial Revolution)

How do you enter? Simply leave a comment in which you tell us what book/s you own just one copy of, but wish you had two of, if only to have a loaner available. This is also a chance to recommend a favorite, whether old or new!

The giveaway will run for about two weeks, ending at midnight on Thursday, May 13. Then I'll draw names to find a winner. So check back and/or leave handy identifying info in your comment.

P.S. I guess I should say which books I wish I had two of! An American Childhood by Annie Dillard and All the Small Things, a collection of poems by Valerie Worth, are the first two that pop into my head. Also The Silver Curlew by Eleanor Farjeon (which I will be posting about soon...).

Update: This contest is now closed. Winners to be announced shortly.
Posted by Kate Coombs at 7:54 AM

Labels: A Curse Dark as Gold, giveaway, The Magic Thief Lost, Theodosia and the Eyes of Horus

I'd love to own a second copy of The Shifter by Janice Hardy. Thanks for the contest. They're all great books. rmarma2@yahoo.com

I wish I had a second copy of Pride and Prejudice because mine never returns home! I can't even count how many times I've bought this book over again - I think I have my sister to blame for this one. My second choice would be The Perks of Being a Wallflower because even though it's among my favorites and I do love to share, I won't let this one leave my house. I'm oddly possessive of this book, for some reason. Thanks for the fun contest!

Oh, wouldn't it be nice to have two of so many...but I am torn between three. Deconstructing Penguins (for parents), Baby by Patricia Machlachlan (just because I love it), and The Guernsey Literary and Potato Peel Pie Society, because it appeals to such a wide variety of readers.

Thanks for making me think! I LOVE YOUR BLOG.

Coincidentally, my daughter just brought home a second copy of The Island of the Blue Dolpins. Her teacher was cleaning out old books from the class shelf. I reminded dd that we already had one, and she said that she thought we could use another. Now I know why: to loan out!

I would like to have a second copy of The Tipping Point by Malcolm Gladwell, which I loan out but then wish I had around so I could reread parts. I also would love to have a new version of Little Women, because the version I have is the hardback my mom handed down to me and it's getting too delicate to be read again and again.

Love your blog! So glad I found it. ~Sydney

Thanks, Lindsay and Sydney!

Such good taste in books, everyone! I wouldn't mind owning another copy of Pride and Prejudice and The Tipping Point, for example. But I still need to read The Guernsey Literary and Potato Peel Pie Society. :)

Thank you for the chance to win! I wish I owned two copies of Good Omens by Neil Gaiman and Terry Pratchett, because I find myself wanting to give it out all the time. There are more books like that, of course, but I think that's the most common one.

I wish I had a second copy of all the Sisters Grimm books by Michael Buckley. I have so many young cousins who would enjoy this series. Thanks for offering the giveaway. I would love to read all these books, especially A Curse Dark as Gold as I'm a fairy tale fanatic.

I would like to have a second copy of Rooftops of Tehran or The spellman Files.

I wish I had a second copy of John Barry's the Great Influenza. I refuse to loan mine out, and people keep asking to borrow it.
twoofakind12@yahoo.com

Sisters Grimm is a fun series! I've yet to read The Great Influenza; will take a look. I am a huge fan of Lisa Lutz's Spellman books--very funny stuff! I loaned all four books to my neighbor, and when she was finished she got tongue-tied trying to explain how much she liked them.

I wish I had 2 copies of the first Theodosia book. My students enjoy it very much - and girls like to read together. I really would love to win the 3rd Theodosia book!
Line

I wish I had a second copy of Harry Potter because my daughter keeps stealing mine.

I wish I had more copies of "The Count of Monte Cristo." It is such wonderful book.
monster6236(at)gmail(dot)com

I wish I had more copies of Divining Rod by Michael Knight. He was one of my fiction professors at the University of Tennessee at Knoxville. Every time I lend this out, it never comes back. I just bought my fourth copy since I don't expect to see my others every again!

I enjoy your blog and follow it more than I should.
books@bastafidli.com

If I won your giveway, I would have my second copies of Curse and Lost--I gave my first ones, that I got from the publishers, to my library, but still want them for myself! And I'm looking forward to the new Theodosial lots.

I with I had more copies of The Talking Parcel, by Gerald Durrell, which is ridiculously expensive and irriplacible, but which is one I want to lend/give to people...