A Review of Enchanted Glass by Diana Wynne Jones

I was counting the days till Enchanted Glass came out! And yes, I made the clerk at the bookstore find me a copy on the cart because they hadn't been shelved yet. Then I ran right home and read it straight through. So how does Enchanted Glass stack up, considering DWJ must compete with her own amazing list of previous books? 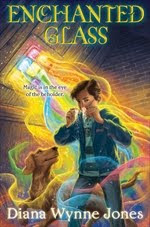 Let me put it like this: This fantasy set in a real-world Britain with magic stirred in does a slow build, but if you like the kind of story that makes you think, you'll enjoy the unfolding of the mysteries of Melstone House. In particular, Jones creates another likable cast of oddballs. We have absent-minded professor Andrew Hope, who inherits his grandfather Jocelyn's house (finding out when his grandfather's ghost flags him down on a darkened country road). Next we meet Mrs. Stock, the housekeeper with the very strong personality who puts the furniture back where she had it every time Andrew rearranges it to his liking. And out behind the house the (unrelated) Mr. Stock gardens crankily, bringing in boxes of humongous vegetables to express his displeasure when Andrew tries asking him to work on the roses for a change.

A one-legged former jockey named Tarquin O'Connor also shows up, and his efficient daughter Stashe is soon working as Andrew's part-time assistant. Another employee thrust upon Andrew is the large and seemingly stupid Shaun, Mrs. Stock's nephew. And then there's whoever, or whatever, is eating the giant vegetables Andrew keeps dumping high up on the roof of the shed out back.

Unfortunately, although Andrew takes over the house, he doesn't remember the important magical information his grandfather taught him when he was a boy. He is supposed to take responsibility for his grandfather's "field of care," but isn't too clear on what that means.

Things get still more complicated when a boy named Aiden (or is it Adam or Ethan or Alan?) shows up, claiming that once his grandmother died, he began to be stalked by ominous shadow people.

Who is Aiden, exactly, and why should Andrew keep him around? What kind of magic is embedded in the colored glass panels on the kitchen door? In her uniquely intricate, funny, and imaginative way, Diana Wynne Jones starts putting the pieces together for her readers.

The author's subtle humor is half the fun here, especially in subplots like the turf wars between Mr. Stock, Andrew, and Mrs. Stock. Her descriptions are often touched with humor, too:

Mr. Stock came first, in his hat as usual. Aidan was fascinated by Mr. Stock's hat. Perhaps it had once been a trilby sort of thing. It may once have even been a definite color. Now it was more like something that had grown—like a fungus—on Mr. Stock's head, so mashed and used and rammed down by earthy hands that you could have thought it was a mushroom that had accidentally grown into a sort of gnome-hat. It had a slightly domed top and a floppy edge. And a definite smell.

Of course, those giant vegetables play a role in the climactic battle scene—who else would put Puck and vegetable marrows on the same page but Diana Wynne Jones? And who else would use the act of cleaning one's glasses as a source of magical power? The only other fantasy writer quite this wryly whimsical that I can think of is Joan Aiken. (Though apparently Neil Gaiman cites Jones as an influence; he's quoted on the jacket of this book as saying, "Funny, smart, twisty, tricky, and always perfectly magical.")

While I have to admit that I've liked the plots of some of her previous titles better, I thoroughly enjoyed this new book by one of my three favorite children's fantasy writers. Anyone who's read the Chrestomanci books and other wonderful works by Jones will be glad to get their hands on Enchanted Glass. If you're new to this author, I suggest you also look for books like Dogsbody, Howl's Moving Castle, Spellcoats, Archer's Goon, and Charmed Life. Reading Enchanted Glass means you're just beginning to dip your toes in the water of the magical pool of stories created by Diana Wynne Jones.
See my post of 10-25-09, "The Queen of Children's Fantasy," to find out more about the author and her books. Please be aware that Diana Wynne Jones is currently battling lung cancer. Encouragement and fan letters can be sent to her in care of her publisher as follows: Diana Wynne Jones, c/o Greenwillow Books/10 E. 53rd St./New York, NY 10022.
Posted by Kate Coombs at 11:35 PM

Thanks for this immediate review!!! I love DWJ and am so sad to hear she has lung cancer. The worlds she created remain forged in my brain, like places I have or might visit one day. I LOVE the Chrestomanci books (although have not read all of them yet...) "The Pinhoe Egg," being one of my favorites. Did you like "The House of Many Ways" and is it part of the "Howl" books?

You're very welcome! You're right, her books are so, so memorable! House of Many Ways is good--Howl and Sophie make an appearance, but it's mostly about a girl named Charmain. Besides the ones I listed in the post, a few more favorites are Cart and Cwidder, The Lives of Christopher Chant, The Tough Guide to Fantasyland (satirical encyclopedia), and her adult fantasy novel, A Sudden Wild Magic (funniest climax ever!). Yes, Pinhoe Egg is terrific, too. Happy sigh for the books; sad sigh about her illness--I sent her a note today.

My favourites are Howl's Moving Castle, Fire and Hemlock and Deep Secret, but this one was a lot of fun too. As you say, her new book has to compete with the cream of a very creamy crop of her others.

Oh, Fire and Hemlock and Deep Secret! I'm trying to think if she ever wrote a book that wasn't good, and nope, didn't happen. (I own everything she's ever written.) I really like how you put it, "competing with the cream of a very creamy crop"! I find that I hesitate to give the better writers less than stellar reviews because when they're not writing brilliantly, they still tend to be writing very well, especially in comparison to the less sophisticated craftspeople working in the field. It's a nice dilemma to have if you're a reader!

My problem is that I don't like to give DWJ (say) 4 out of 5 for one of her less-good (IMO) books (such as Power of Three) because they are usually better than the best book by others. On the other hand, it seems wrong to give Po3 5 out of 5 when Deep Secret exists! I don't know many 5/5 books by anyone. The select list includes The Changeover by Margaret Mahy and The Perilous Gard by Elizabeth Marie Pope. Then there's Polymer by Sally Rogers-Davidson and Catherine Jinks's Witch Bank.

Exactly! We really need a 1-10 scale or even a 1-100, but for now, I guess it's 4.5 for a book like Power of Three (I agree). I've found I'm so dang picky anymore that I've broadened my "scoring" just to be able to have a dialogue about books with the community. And yes--Changeover is utterly brilliant!! It's been a while since I read The Perilous Gard; will look for the other two, esp. Witch Bank. Great title. I thought Evil Genius had a little pacing trouble, by the way, though I liked the premise.

Oooh - I hadn't realised this was out! DWJ is one of my very favourite authors too :D

Oh, no - I did not know about the lung cancer. That is distressing. Thank you for the information and contact info.

I loved this book, too - of course! Her books are so consistently delightful.