A Review of Attack of the Fluffy Bunnies by Andrea Beaty, illustrated by Dan Santat

If the narrator of A Series of Unfortunate Events got on your nerves, or if you don't think a book like The Case of the Case of Mistaken Identity by Mac Barrett is funny, then this spoofy book is not for you. But if you're a fan of satire, not to mention old B horror movies on late-night TV, you should give this one a try.

Not long ago, in a galaxy just beyond the Milky Way—but not quite as far as the Peanut Cluster—there lived a race of fierce, large, ugly, and ferocious furballs known as the Fierce, Large, Ugly, and Ferocious _____. (Fluffs for short—though in reality, there is nothing short about Fluffs.) 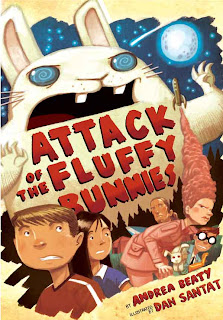 The missing word above is supplied on a small insert included with the book (which I used as a bookmark!). It has a mean-looking picture of a Fluff and reads:

WARNING: A word on page 2 was removed for your protection. Under no circumstances should you insert the word "Furballs" at the end of the phrase "Fierce, Large, Ugly, and Ferocious." Doing so might cause this book to make sense.

Yep, this is that kind of book! Andrea Beaty cheerfully mocks summer camps—especially lanyards—glitter-obsessed girls, fluffy bunnies, High School Musical, surfers, B horror movies, and, most notably, SPAM. Since Joules and Kevin Rockman's parents are determined to retain their crowns as the SPAM king and queen, they drop the kids off at the gates of Camp Whatsitooya and roar off to a SPAM festival. (Mrs. Rockman's award-winning recipe the previous year was Funky-Chunky-Chocolate SPAM Pudding.)

Only, it just so happens that the camp is the landing spot for the Fluffs we met in Chapter 2, who have to relocate when their marshmallow planet is destroyed by a meteor. Naturally, or rather unnaturally, complications ensue, also horror and hilarity. The Fluffs' sweet tooth, which in no way detracts from their tendency to eat humans, contributes to plot development. And why are the camp counselors acting so strange, wanting the campers to build a three-stage intergalactic rocket with satellite communications out of popsicle sticks?

One nice touch here is the way Joules and Kevin reference the aforementioned B horror movies. I particularly like Kevin's Chart of Famous Last Words, e.g., "There's nothing in this musty, cursed tomb that could possibly hurt you." Which is from a movie called Curse of the Musty Tomb, in case you were wondering.
This is an adventurous, plot- and humor-driven story, so most of the characters are deliberately one-dimensional, but Joules and Kevin make a likable pair of heroes, with Joules being the risk-taker and Kevin the more cautious sibling.

Attack of the Fluffy Bunnies is not a true graphic novel; however, it does have sections of cartoon panels here and there, nicely drawn by illustrator Dan Santat. At 184 pages, this book shouldn't intimidate reluctant readers. And, as I've mentioned in previous reviews, today's kids don't seem to have any trouble understanding satire, no doubt thanks to having watched a couple of thousand Simpsons episodes each.

As for the plot, simply think of any B horror movie, and you'll have some idea how this tongue-in-cheek sci-fi story for middle grades is going to play out, with Joules and Kevin being called upon to save the planet. But I'll warn you: You'll never look at a bunny—or SPAM—the same way again!
Posted by Kate Coombs at 4:21 PM

This book sounds like fun. Thanks for the review.