A Review of Foiled by Jane Yolen, illustrated by Mike Cavallaro

Jane Yolen is known for her amazing career in children's literature, which spans genres as well as decades and will hit the 300-book mark this fall. She's published poetry, short stories, picture books, easy readers, middle grade fiction, and YA novels, including fantasy, science fiction, humor, historical fiction, and a marvelous folklore anthology you should look for at your local library or bookstore (Favorite Folktales from Around the World).

So why not a graphic novel? 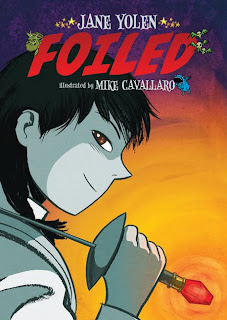 Never one to rest on her laurels, Yolen has expanded her already-expansive repertoire with the recent publication of Foiled, a graphic novel illustrated by Mike Cavallaro. Foiled is the story of Aliera Carstairs, a girl who doesn't fit into any particular group, not even the kids in her fencing studio. She's so much better than the others, it sets her apart. Besides, she seems to thrive on being apart—even when she questions it.

Graphic novels lend themselves to third person, but Yolen's book is written in the first person, which I liked. Aliera introduces herself as our narrator, explaining on page two:

The story I have to tell you is not about Avery, it's about me, and fencing, and what I learned while masked.
It's about defense and defenders.
It's about power, and I don't mean electricity.
It's about family.
Most grown-ups will tell you things are revealed when you take off a mask.
But they're wrong, as they often are.
Everything was revealed when I put my fencing mask on in Grand Central Station.
Everything.

In these chapters, satisfyingly titled with fencing moves, Aliera shows us her isolation, then proceeds to develop a crush on a strange new boy, her lab partner. Amazed by her own giddiness, she tries to retain her dignity around the flirtatious and slightly odd Avery, but doesn't always succeed.

Aliera is also given a new foil, one her mother bought at a junk sale. She believes the huge jewel on the handle is paste and tries to remove it, but it won't come off. Then comes the Saturday when Aliera cancels her usual visit with her cousin Caroline, who is chronically ill, to meet Avery at Grand Central Station for a date.

There she puts on her fencing mask—and sees another world, one filled with fairy tale creatures who are beautiful, ugly, odd, and menacing. Suddenly Aliera is in the middle of a battle, with only her fencing skills and her New York City instincts to save her. And Avery isn't exactly cooperating.

Yolen uses familiar tropes like the kid with special powers and a mission to save the world, magic swords, and hidden kingdoms, but she takes them somewhere new in this urban fantasy, showing readers how powerfully voice can drive a graphic novel. Sometimes the visual elements in a graphic novel (like the art in too many picture books) can mask a weak text. That is not the case here. If anything, Yolen's language elevates the art—although that's well done, too. One nice touch is that Aliera is colorblind and Cavallaro's illustrations represent her black-and-white view until Aliera gets to see the unseen world within her world, at which point color bursts onto the pages and into her eyes for the first time. (This strategy was also used to good effect in the new graphic novel of Stephenie Meyer's Twilight.)

Mike Cavallaro's art is witty and clear, creating satisfying movement across each spread. He is especially good at capturing the tiniest nuances of Aliera's moods with facial expressions and other body language, playfully adding sharp teeth when she is angry.

More than another feisty girl, Aliera is by turns distant and familiar as she struggles with her place in the world, trying to become something, she's not sure what. These themes are woven into the very real feeling of the events depicted in Foiled. I like how Yolen uses things like Aliera's colorblindness and the strategies of fencing to represent this character's struggles with identity and with social interactions. When a distracted Aliera performs poorly in the fencing studio for once, her irate mentor says:

"Aliera Carstairs, what do you think you're doing? OR NOT DOING."
"I was protecting my heart?"
"Defense, yes. But sometimes you have to risk all to win. I thought you understood that."

One more word, and this interchange would lose its power. Instead Aliera shrugs, and her instructor continues: "Perhaps you need to sit down. Or go home. Or rethink your commitment."

During my first reading, I was a little disappointed not to see more action with the otherworldly creatures in the train station. Also, the most obvious of Aliera's problems in that section of the book is solved by outside intervention. However, a second look made me realize that the true battle in the train station is Aliera's "date" and how she deals with it. Yolen uses fantasy elements to heighten the awkwardness of young love throughout Foiled, ruthlessly dissecting it like the frog Aliera and Avery must dissect early on.
Of course, Aliera herself warns us that this story "is not about Avery, it's about me, and fencing." So I should say, rather, that Foiled is about how Aliera learns a little bit more about handling herself in a seemingly black-and-white world. This book is Volume One of a coming-of-age story that uses a foil and a boy and magical creatures in a train station as, well, foils.

From what I understand, Aliera's story will be told in a mere two volumes. Frankly, I'm not sure how that's possible—there's so much potential for a longer series here. But if anyone can do it, it's master craftswoman Jane Yolen.

Note for Worried Parents: Foiled is listed on Amazon as being for ages 9-12, but it has a kind of teen sensibility, with brief references to things like drug and alcohol use, plus kissing. Aliera and her friends are in high school. I think the ideal audience for this book would be middle schoolers, along with 9th and 10th graders. Aha—the publisher's website says it's for grade 6 and up (or age 11 and up).
Posted by Kate Coombs at 8:59 AM

What a great review - I can't wait to read this!
Thanks,
Namaste,
Lee