Technology reporter David Pogue has come up with a very funny premise, although the follow-through is a bit more ordinary. As we learn in the first chapter, not to mention the title, Abby Carnelia has a magical power: when she tugs on her ears, she can make a hard-boiled egg spin. 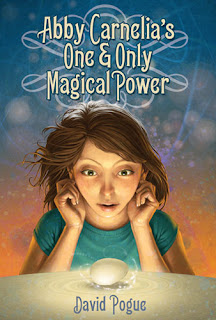 Only—that's it! No variations, no additional applications, no broad-ranging telekinesis; just ears and egg spinning. (Raw eggs don't work, either.) Here's how the book begins:

Once she learns of her ability, Abby naturally wants to know more about magic. She ends up getting into a surprisingly inexpensive summer camp for young magicians. At first Abby is discouraged to discover that the other kids are practicing stage magic, not the real thing. Then she does finally meet other kids with magical powers, and all of them go off to an "advanced camp."

The other powers are just as quirky as Abby's, if not more so. I will just share one: a girl who can float off the floor, but only a quarter of an inch, and then only if she pictures a certain goofy scenario involving buffalos.

One of the best characters is a boy named Ben, who, after he decides Abby isn't nuts, helps her perform her egg act in suitably grand style for the camp magic show. Then Ben joins the kids with magical powers as they change camps, even though Abby is pretty sure Ben's power isn't magical at all.

The rest of the plot, which depends partly on a cleverly censored set of e-mails that the author lets us read, plays out rather typically, corporate villains and all. But readers will find that Abby and her new friends are an appealing bunch. I especially like how they figure out some terrific applications for their odd skills when they attempt to make their escape from the second camp.

Abby Carnelia's One & Only Magical Power is a friendly read, and you'll have fun watching Abby try to find a place for herself in a world where egg-spinning doesn't seem particularly useful. I actually got more of a science fiction than a fantasy feel from this book, perhaps because the powers are so focused and non-wandy. There's obviously a message here about uniqueness and individual worth, but it's plenty palatable, tucked in between the lines of Abby's adventures with her new gift and her new friends.
Posted by Kate Coombs at 3:57 PM