A Review of Alchemy and Meggy Swann by Karen Cushman

I don't normally seek out historical fiction, but I make an exception for Karen Cushman's books. I still smile when I think about the heroine of Catherine, Called Birdy, for example. Like Meggy Swann, the main character in Cushman's new book, Birdy is just so completely lively and real. Cushman has a knack for created characters who seem like someone you know—even as they fit into their historical setting. And that setting will also seem comfortably real. You never feel as if Cushman is a history teacher thinly disguised as a storyteller. She is simply a storyteller who sets her tales in vanished eras. 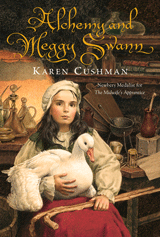 Cushman doesn't mind taking risks when it comes to writing main characters who are unpleasant, either. But like Mary in the classic, A Secret Garden, these girls tend to become more likable as they face their challenges and grow up a bit. In the case of Meggy Swann, those challenges are formidable: Meggy is a cripple in Elizabethan times, an age when many still thought that physical deformities were the mark of the devil and even a sign of witchcraft.

Meggy's mother, a hot-tempered barmaid, had shuffled the child off on her mother for years. Now that the old woman has died, Meggy's mother washes her hands of the girl, sending her to live with her long-vanished father, an alchemist, in London. When he sees Meggy, he doesn't want her because she is not a boy and is imperfect, besides. Meggy's only friend is a goose named Louise.

Here is a glimpse of Meggy after she has been dumped at her father's by a carter and has forgotten her goose. The carter returns to drop off the bird, but refuses to take Meggy back to her village:

Startled by a sudden banging at the door and in truth a bit fearful, Meggy stood up quickly, grabbed her walking sticks, and made her way into the farthest corner of the room. She moved in a sort of clumsy jig: reach one stick ahead, swing leg wide and drag it forward, move other stick ahead, swing other leg wide and drag it forward, over and over again, stick, swing, drag, stick, swing, drag. Her legs did not sit right in her hips—she had been born so—and as a result she walked with an awkward swinging gait. Wabbling, Meggy called it, and it did get her from one place to another, albeit slowly and with not a little bit of pain.

The banging came again, and then the door swung open and slammed against the wall, revealing the carter who had fetched her to London.

He was not gone! Meggy's spirits rose like yeasty bread, and she wabbled toward the doorway. "Well met, carter," she said. "I wish to go home."

"I were paid sixpence to bring you hither," he said. "Have you another six for the ride back?"

He shook his head. "Your mother was right pleased to see the back of you." He turned, took two steps, and lifted something from the bed of the wagon. Something that wriggled and hissed. Something that leapt from his arms. Something that showed itself to be a large white goose, her wings spread out like an angel's as she made her waddling way over to the girl. Louise. Meggy's goose and friend.

When our story begins, Meggy has no idea how to care for herself because her grandmother did everything for her. She is also frightened of the big city and has no social skills. Yet though some Londoners are superstitious and mocking, others are kindly and reach out to Meggy. She gradually makes friends with a group of players, especially a boy named Roger (whom she begins by insulting mightily!), and with a cooper neighbor and a printer.

As for her father, Master Ambrose, readers get a look at the life of an ever-hopeful alchemist during this period of history. The predecessors of chemists, these men pursued the dream of turning base elements into gold. As we discover in the book, they could be a shady lot. What's more, Meggy's father isn't any better at parenting than her mother was. He can't even seem to remember her name.

Meggy becomes a sort of assistant to her crotchety father, who eventually gets involved with a conspiracy that could lead him into terrible trouble. Meggy tries to set things right, giving the book more of an adventurous flair. But really, the strengths of Alchemy and Meggy Swann are Meggy's growing friendships and the close-up look the book gives us at life during Queen Elizabeth's reign.

It would have been easy for Cushman to transform Meggy's father into a more thoughtful and reliable person, but that would be like turning lead into gold. In real life, it can't be done. Instead the author lets Meggy figure out how to make her own way in life, a far more satisfying resolution. Of course, Meggy's new friends help her, which some might find a little too smooth. Then again, that's what most of us do when the people who should be there for us let us down: we seek out new sources of support.

One nice touch in this book is Meggy meeting two men among the players, one named Master Grimm who looks jolly and friendly, another named Master Merryman who looks, well, grim, with a scarred and twisted face. But as Meggy comes to find out, Master Grimm is selfish and impatient, while Master Merryman is thoughtful and kind. Although Cushman doesn't lecture us about this experience, it does serve to teach Meggy—and us—about not judging by appearances.

Cushman provides an author's note at the end of the book, explaining things like alchemy, broadsides, and the treatment of cripples during the Elizabethan era.

At 176 pages, Alchemy and Meggy Swann is a compact read. It is also a compelling one. Cushman gives us a girl whose favorite expression is "Ye toads and vipers," a girl who wabbles and loses her temper, a girl not wanted by anyone. Yet the author shows us how Meggy succeeds against the odds—and there we have lead that truly does turn to gold. Or at least, we have lead used to build something altogether new and promising.

Note: I requested this book from the Amazon Vine program. It is scheduled to be published on April 26.
Posted by Kate Coombs at 11:18 PM

I'll chase this one up, I think. It bears a passing resemblance to one of my wips; The Pedlar's Daughter.

Thanks for the review. I am looking forward to reading this!