A Review of Living Hell by Catherine Jinks

This book's title represents truth in advertising in a big way: the story gets bleak, then bleaker, working its way clear down to bleakest. In that sense, Jinks's new YA science fiction work is ultimately a horror story, Edgar Alan Poe on a spaceship. Or maybe it's just an especially creative example of dystopian fiction. (Spoiler ahead!) 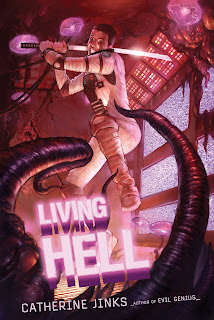 We begin with a seventeen-year-old boy named Cheney who lives on the Plexus, a huge spaceship outbound from Earth many years earlier. More than a thousand colonists live in a perfectly well-ordered environment which supports their every need. But during the middle of a birthday party in a virtual environment, Cheney gets an inkling that something has gone wrong. As the son of leaders, he is able to find out that the ship is about to pass through a strange wave of radiation.

If this were a movie script, the wave would be what is called "the inciting incident." The other movie term I'm thinking of is "high concept." Because—and this will be a spoiler—the radiation essentially transforms the ship into a living organism. An organism whose immune system tags the humans as something along the lines of attacking bacteria.

I tell you this because there is no way to describe the book at all without showing you where Jinks is going with this. The remaining three-fourths of Living Hell describes the terrible struggle for survival of those who manage to get through the first few hours. The author goes all out with her concept, coming up with intriguing details about the problems Cheney and his friends encounter, as well as how they get around the ship and defend themselves.

So this book is action-adventure of a kind boy readers might particularly enjoy (including some grisly deaths), especially if they like horror. Jinks does a great job of depicting the ship's transformation, carefully envisioning what each change might entail. Here's a sample from right after the change:

Slowly, one by one, we clambered through the hole between the door panels. It was becoming so small that by the time Dad squeezed through—nearly falling on his face in the process—the fleshy rims of the panels were sucking at his body.

It was disgusting to watch—like someone being born.

Out in the street there were samplers flying everywhere. The street shuttle had disappeared. All the doors had turned into valves and the floors into slippery paths of tissue, some of it slick and smooth, some of it rough with soggy bristles, some of it bunched into funny pads or pillows that looked a bit like cauliflower heads.

"I feel as if I'm in somebody's stomach," Dygall muttered, and I glanced at Mum in alarm. She knew exactly what I was thinking.

"We're not in a stomach," she declared. "If we were, those excretions would be eating through our pressure suits."

(Yep, there are quite a few scientific explanations of what is happening!)

Now, I'm usually pretty good at suspension of disbelief. But this one is tough to buy into, and perhaps that's because the change is so abrupt that, in addition to being a shock to the crew of the Plexus, it's a shock to the reader. I would have liked to see the change come on more gradually, with a building of suspense, having people being picked off one by one instead of everyone being completely under attack all at once. It also seems like the characters figure out what's going on and what each change means a little too quickly. (Including an explanation of what the strange radiation is, which isn't entirely satisfying.) Though many readers will appreciate that Living Hell is fast-paced, at times it feels a bit rushed.

As for characterization, we mostly get to know Cheney and an aggressive friend of his named Dygall. Cheney is a likable first-person narrator who is forced to become the leader of a small group of kids in short order. He rises to the challenge, and readers will be rooting for him to succeed.

It's possible there could be a sequel, although I didn't get the feeling the author has decided to write one just yet. For the moment, if you're in the mood for a happy ending, you should probably skip this book. On the other hand, if you don't mind a dose of gloom and doom and have a fondness for science fiction, action-adventure, and horror of the gooshy variety, try Catherine Jinks's latest.

Note for Worried Parents: Living Hell is a book for teens and includes some peril and gruesome deaths, but the author doesn't linger on the gore.
Also: I requested this book from the Amazon Vine program. It is scheduled to be published on April 12.
Posted by Kate Coombs at 11:01 PM

No thanks. I'll stick with the delightfully wicked Witch Bank!

Edgar Alan Poe on a spaceship. I may have to give this one a go.