A Review of Theodosia and the Eyes of Horus by R.L. LaFevers

You know those kids that really should be CEOs of multinational corporations at the age of seven? The ones who look with disdain at the foolish adults who haven't sufficient sense to bow to their wills? The ones you're nice to now because they'll be running for president or prime minister, if not queen, in a couple of decades—and winning? 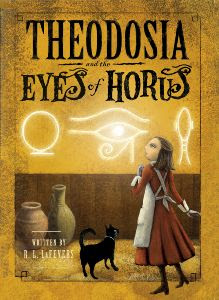 Yes, Theodosia Throckmorten is one of those kids. Not because she's bossy or precocious in a sitcom kind of way, but because she knows what she knows and doesn't suffer fools gladly. Theodosia is busy, and adults seem to have a tendency to get in her way. As she puts it in the first two sentences: "I hate being followed. I especially hate being followed by a bunch of lunatic adults playing at being occultists."

In Book 3, Theodosia and the Eyes of Horus, our 11-year-old heroine continues using her knowledge of Egyptian magic to remove the curses from objects shipped to the Museum of Legends and Antiquities that her parents run. The year is 1906, mummies are all the rage in London, and sometimes they're even real.

The adults interfering with Theodosia are a motley crew. We have the slightly deranged Aloysius Trawley and the Black Sunners, who seem pretty sure Theodosia is a reincarnated goddess and are cranky about her lack of willingness to come around and share her supposed power. Then we have the traitor Admiral Sopcoate and his cronies, who escaped in the last book and now show up demanding the strange artifact Theodosia's brother Henry has discovered in the museum basement—the Emerald Tablet. Soon it seems everyone is after the tablet, including the mysterious and possibly fraudulent Egyptian magician, Awi Bubu. Theodosia's mentor, Lord Wigmere, is not helping matters any. He keeps trying to pressure her into working with his representative at the museum, Clive Fagenbush, who gets on Theodosia's last nerve.

Really, at this point, I don't mind what shenanigans Theodosia is up to; I just like watching her in action. Whether she's putting a sand-in-the-pants curse on Fagenbush or arranging a secret funeral, it's all about this character's stern dedication to ridding the museum of ancient spells and keeping the bad guys away from objects of power.

LaFever's humor adds a great deal to the books. For example, she has a lot of fun contrasting Theodosia's idea of proper (read: expedient) behavior with what the adults around her think a young lady should be doing. (It doesn't hurt that Theodosia's absent-minded Egyptologist parents never dream that their daughter could be getting herself into quite so much trouble.) Former pickpocket Sticky Will and his brothers continue to add comic relief, along with some much-needed assistance.

As in the previous books, Yoko Tanaka's occasional black-and-white illustrations add to the author's storytelling.

This book reveals intriguing information about Theodosia's ability to sense magic, especially curses, which moves the series arc forward. Although the problems in Theodosia and the Eyes of Horus are solved by the end of the book, we also learn the direction the next installment will take. I look forward to reading Book Four in this clever, rambunctious series.

I do recommend reading books one and two before you tackle LaFevers' latest. While you can catch the gist of what's going on by simply diving in, the story will be that much more effective if you backtrack to read Theodosia and the Serpents of Chaos and Theodosia and the Staff of Osiris first. For one thing, young readers will be able to steep themselves in the nuances of Egyptian magical lore, as studied and applied by our heroine.

I'll just end by mentioning that I like how School Library Journal puts it on the jacket flap of the new book: Theodosia is "a combination of Nancy Drew and Indiana Jones."

Note for Worried Parents: There's some occult Egyptian magic in these books, including a case of haunting and a mild ghost removal ceremony, if that sort of thing concerns you.

Update: At writer Ellen Oh's blog, her daughter Summer has done a very nice interview with R.L. LaFevers about this book and the Theodosia series.
Posted by Kate Coombs at 8:48 AM