A Review of Spilling Ink: A Young Writer's Handbook by Anne Mazer and Ellen Potter

I haven't come across a "How to" book for kids about writing that has impressed me—till now. Spilling Ink is a chatty, informed, get-real look at writing by two children's book authors, and it doesn't waste time diagramming sentences and listing common spelling errors. Anne Mazer, author of series like Abby Hayes and Sister Magic, and Ellen Potter, author of books like Olivia Kidney and Slob, lay out what it means to be a writer and tell kids how to get the job done. 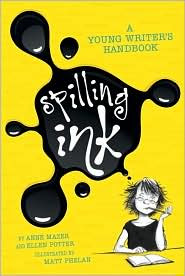 This book is written in a thoroughly reader-friendly style, with the two authors taking turns giving advice in a manner reminiscent of blog posts. Hayes and Potter know their stuff, and it shows: as a writer, I was pleased to see such good ideas expressed so simply, not to mention humorously. For instance, the chapter and section titles are often entertaining: "More Crawling Lizards, Please," "Truth or Dare," "The Robo-Narrator," and "Belly Buttons" are a few of my favorites.

Here's an example of the book's tone, from Ellen Potter:

Before I started writing seriously, I was under the delusion that "real" writers sit down and write out the entire story in one nearly perfect, spectacularly clever draft. Oh, sure, maybe they would change a word or two, or rename one of their characters "Nathan" because his original name, "Jake," reminds them too much of their cousin Jake who belches the theme music to retro TV shows. But that's about it.
Wrong!
Hugely, profoundly, utterly wrong.

This book offers up instructive analogies, such as comparing a story's setting to a mood ring, and useful techniques, such as "the chicken-nugget circle." The authors provide short writing samples to illustrate their points here and there, which is so much more helpful than mere explanations. A writing activity at the end of each chapter is called "I Dare You," e.g., "Write a scene about a circus, but make the mood dark and grim." These activities are so spot-on that they're practically a shock—I've seen far too many writing practice assignments in literature textbooks and workbooks at schools that weren't nearly as relevant as they hoped to be. (This could be because they were written by teachers, not professional writers out in the trenches. Sorry, teachers!)

A little of the advice in Spilling Ink reminds me quite happily of Anne Lamott's classic book of riffs on writing, Bird by Bird, particularly the Chapter 2 title, "Ugly First Drafts." That's an excellent adjective choice, as I'm sure those of you who are familiar with Lamott's famous chapter titled "Shitty First Drafts" would agree!

As is usually the case with nonfiction, the stories are the best part of the book. I would have liked to see even more of them, but then, I'm a story glutton. There are some good ones here, such as Mazer's account of her enchantment with those calendar kiosks that pop up in malls right before Christmas--illustrating how everyday observation can enrich a writer's work:

...[I] would stop to look at them, even if I was in a rush. There were calendars about outhouses, movie stars, barns, mountain ranges, duct tape, sunsets, puzzles, race cars, words, pigs, mushrooms, rivers, cows, knitting, clouds, state parks, and every type of dog in existence. Since each chapter in an Abby book begins with a quote from a fictitious calendar, the mall calendars inspired me into wild fits of imagination. I had great fun inventing calendars for Abby wtih names like the "Marshmallow" calendar or the "Daily Eyeglass" calendar or the "Supermarkets of New Jersey" calendar.

Other concepts are also explained charmingly, and, more important, clearly. The idea of letting your characters do their own thing and not over-managing them is tricky for many grown-up writers to understand, but Potter uses the idea of "Don't Be a Bully" to explain it. In fact, earlier in the book, she makes a brilliant point about character:

Mazer and Potter share their writing process with us, as well, e.g., by showing how they brainstormed to choose the title for this book. What's more, they think of problems to address that other books about writing don't always pinpoint, such as "Avoiding the Mad Dash," that tendency to slap on an ending that young writers—and some older ones—are prone to. Spilling Ink even covers topics like journaling and working with a writing partner.

Matt Phelan's illustrations further add to the cheerful tone of the book, showing us sturdy young writers in spot art sprinkled throughout the pages.

Respecting their readers, Mazer and Potter make a point of saying that a young writer needs to find what works for her; the ideas in the book are intended as potentially useful strategies, not rules. This is an important distinction to make, and not all adults would have bothered to make it.

One of the book's best treats is the Appendix. Just when you think it's over, you find out that Anne and Ellen have interviewed each other in a section called "Spilling Secrets," which is full of fun biographical tidbits and a bonus slant on what it means to be a writer.

I've seen a number of boring books about how to write interesting books, which naturally struck me as ironic. But Spilling Ink takes its own advice: it's funny, specific, fascinating, and useful. I don't just recommend it to young writers, I recommend it to aspiring (and even published) writers who are in their 20's, 30's, 40's, and beyond.
Posted by Kate Coombs at 7:31 AM

Thanks, Jim--hope you get a chance to use the book with your students!

This sounds like a great book! Would it be appropriate for 6th grade?

Michelle--Definitely. In fact, I would say that 4th-6th grades is the perfect range for Spilling Ink. Not to mention that Amazon lists it for ages 9-12, as well!

Thanks! I'm ordering it right now. Love your reviews!