A Retro Review of Sorcery and Cecilia or The Enchanted Chocolate Pot by Patricia C. Wrede and Caroline Stevermer

This book has been around since 1988, but it has since been reprinted. In case you're thinking that's a long title, there's even more: the subtitle is actually "being the correspondence of two Young Ladies of Quality regarding various Magical Scandals in London and the Country."

Sorcery and Cecilia is an epistolary novel, a fantasy, a romance, and a suspense novel. It fairly percolates of Jane Austen. Hmm, perhaps "seeps" would be a better verb, since there's an awful lot of tea drinking here, relieved only by a little of the titular hot chocolate. 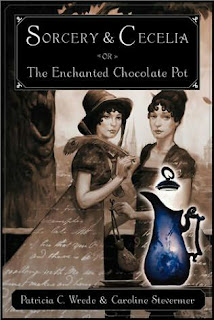 Cecilia Rushton is stuck at Rushton Manor in Essex, while her cousin Kate is in London experiencing a high ton season with her sister, the lovely and self-centered Georgina. There is gossip of clothes and parties in their letters, but also of the mysterious marquis of Schofield and a neighbor honored by the Royal College of Wizards. This isn't Jane Austen's England, after all, although it's a close match except for the wizards!

Pretty soon Kate is stumbling into a hidden garden and nearly suffering death by hot chocolate, escaping with nothing more than a hole through her skirt where the chocolate touched it. And Cecilia is rolling her eyes at the sight of every boy in the district falling in love with a girl named Dorothea. When they figure out that the woman with the chocolate pot is the same Miranda who is the terrifying mother of Dorothea, Kate and Cecilia rightly suspect a plot.

Meanwhile, Cecilia comes across a boy named James Tarleton spying rather ineptly in the bushes, and Kate meets Thomas Schofield, the mysterious marquis himself, who proposes an engagement-of-convenience while he does his own spying on Miranda and her ally Sir Hilary Bedrick. Neither of the boys takes the girls very seriously, unaware that Cecilia and Kate are beginning to tackle the villains themselves, armed with magical charm bags and elegant society manners.

Then Kate is nearly turned into a tree and her cousin Oliver, Cecilia's brother, disappears. The chocolate is getting very hot, indeed!

This comedy of manners in letters is an intelligent book, one that will be appreciated by reader who like Jane Austen and perhaps Diana Wynne Jones. TV-brained readers might feel impatient at its relatively slow pace, but others will enjoy its slow build and the clever little twists, not to mention the way the book turns the traditional regency romance on its head by the introduction of magic and two strong-minded girls.

And, as you might guess, James is falling for Cecilia and Thomas is falling for Kate, though it takes the four of them quite a while to figure that out! The romance doesn't overpower the storytelling; it just adds spice.

About the only dull bit in this book is the explanation of the spells wrought by the villains. Otherwise, I think you'll find it a delightful read for a summer afternoon—preferably in conjunction with a delicate rose-patterned teacup filled with Earl Grey tea.

Note that the authors have written two sequels, The Grand Tour and The Mislaid Magician or Ten Years After. These are likable, if not quite as good as the first book. I recently reviewed a new spin-off by Stevermer, Magic Below Stairs.
Posted by Kate Coombs at 12:41 PM

I had no idea Sorcery and Cecilia was as old as all that (ie 1988 ie my brother). I thought I'd stumbled upon something new when I found it five years ago. I still have not gotten hold of the sequels, though, and I really want to BEFORE I read Magic Below Stairs which in no small part thanks to your review I really want to read...

I know, huh? It must not have made the rounds much that first time, when it was simply titled Sorcery and Cecilia. My edition is 2003, but has a note mentioning the 1988 printing, which is the only reason I know about it. I will mention that I don't think you need to read the sequels before reading Magic Below Stairs, which is kind of a side story, though I suppose chronologically it would fit between books 2 and 3.