A couple of years ago, I ordered a few sets of the British "Mythological Creatures" stamps, thinking they'd make a great Book Aunt giveaway. Besides their topic, they are linked to children's books because Neil Gaiman—a good stand-in for Jack Skellington, the Halloween King, in more than one way—wrote the text that describes each stamp on the lovely enclosure card. How cool is that? In fact, Gaiman teamed up again with his favorite illustrator, Dave McKean, who did the darkly beautiful artwork. Here is a sample of Gaiman's writing, from the description of giants: 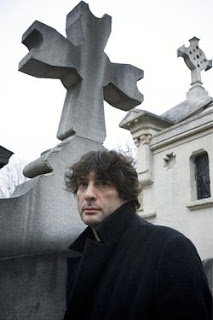 giants sleep, lost in deep slow dreams, covered in earth and trees and wild grass. Some have clouds on their shoulders or long men carved on their sides. We see them from the windows of cars and tell each other that from some angles they look almost like people.

So here's how this works: leave a comment describing your favorite monster or mythological creature in 1-2 sentences. On October 31, I'll pick the best of the comments that actually do some describing, as opposed to simply naming a beast. You're welcome to throw in a metaphor or two! I have three of these stamp sets, so after selecting the best and second-best comments, I'll simply do a drawing for stamp set #3.

Meanwhile, I hope your costume plans are coming together, your leaves are turning orange or gold and falling in slow motion, your spiderwebs are trembling in the moonlight, and you have at least one jack-o-lantern on your porch, maybe even a tribe. 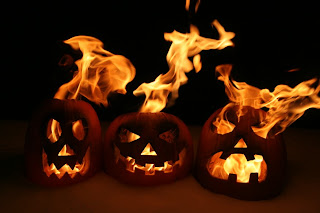 Note: As usual, this giveaway is open anyone on the planet. I'll be happy to pay the postage if you're a winner in Japan or New Zealand or Kenya! Wherever you're from, you should either leave your contact info in your comment, or just be sure to check back on November 1 to see if you won.

Update: Participants, see my note in the comments!

Posted by KateCoombs at 3:12 PM

I think my favorite mythological creatures are dragons. Despite (or perhaps because of) occurring in almost every culture, they come in great variety. My favorites are the Oriental dragons, because they are bringers of good luck and fortune rather than hoarders of gold and eaters of people. But any of them are majestic beings, with their glistening scales and huge wings. How beautiful they must be when they fly!

(I tried commenting the other day and it DIDN'T WORK. So now I have to wonder whether whatever I wrote before is BETTER than whatever I'm going to write now... oh well).

Awhile back I took one of those blog surveys, and there was a question asking what my favorite mythological creature was. I thought I must not be trying hard enough when all I could come up with was "dragon," but the harder I thought, the more I realized there is just no comparison! Dragons are found the world over. They can be good or evil, but they're always enigmatic and crafty. Other creatures are so often awkward conglomerations of other beasts, but not dragons-- they are self-contained perfections. And they fly! How can anyone choose anything else?

One of my favorite mythological creatures is the Kelpie, a majestic but malevolent shape-shifting horse, gleaming in a shining coat of deep green and crowned by an ebony mane, dripping with the waters of the rivers and streams of Scotland which it is said to haunt. It would lure innocent travelers with the promise of helping them ford the rushing torrents, but instead would crash headlong into the raging rush, claiming another witless victim. Many a stormy night would be heralded by the thunderous screams of the Kelpie, never to be tamed save for the fearless of heart who braved to lure it into a charmed bridle which could tame its brazen fury.

Since there were only four of you and you all said very cool things, I've decided to simply draw one name and send that person an alternate prize. (That would be Laurie Brown.) I will ask that all four of you contact me a my author e-mail, kate at katecoombs dot com, to give me your snail mail addresses so I can mail out your stamps or other prize. Thanks again for participating!