A Review of Shelter by Harlan Coben

Yet another writer for adults crosses over into the lucrative YA market, this one an Edgar-award winning mystery/thriller author who's been writing books about Myron Bolitar, our new MC's uncle. In fact, Mickey Bolitar was apparently introduced in Coben's latest adult novel, Live Wire, but here the focus is on him—and we're clearly talking series starter. Coben doesn't pull any punches: he starts off with a white slavery/sex trade plot in his very first book. No middle grade fiction for him! 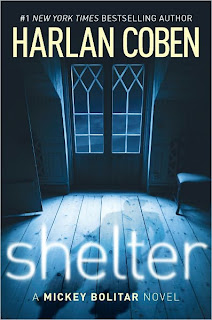 father die in a car accident, and now his grieving mom is in rehab. He's not crazy about his new school, either, at least until he meets an odd but lovely classmate who becomes his girlfriend. Then Ashley disappears, and Mickey is determined to find her.

Along the way, he'll run into some seriously scary characters, as well as "Bat Lady," an old woman who gives him some clues about his father's secret life, things Mickey never knew before. The trail of his father's secrets extends back to other people's stories, events from the World War II era.

Meanwhile, Ashley is linked to a strip club owned by some real thugs. Mickey gets in and out once without any real damage, but he won't be so lucky twice.

At school, Mickey finds more clues about what happened to Ashley; he also has run-ins with a bully and a pretty girl who knows more than she should. But my favorite characters are goofy Spooner and sour Ema. Spooner is a bit of a cliché, the over-talkative geek—still, he's rather appealing. Ema is sort of goth, a hostile fat girl who's bright and loyal and willing to break the rules for her friends. Though it seems obvious Ema could never be a romantic figure to Mickey, whether due to her weight or because she makes such a great friend, she is nevertheless a powerful character who really adds to the story. This is from the scene where Mickey meets Ema. He saves her from participating in an unpleasant school activity, but she's not exactly grateful:

"Is it mandatory?" I asked.

"Is participating in this particular exercise mandatory?"

"Then I'm sitting out." I looked over at Ema/Emma. "Would you mind keeping me company?"

We walked away then. Behind me I could hear the world go silent. Then Ms. Owens blew a whistle, stopping the exercise and calling for lunch.

When we were a few more feet away, Ema/Emma said, "Wow."

She looked me straight in the eye. "You saved the fat girl. I bet you're really proud of yourself."

Then she shook her head and walked away.

One amusing plot component is that Mickey doesn't trust Uncle Myron, though many readers will come to the book thinking Myron is a pretty great guy thanks to the author's adult series. Mickey sneaks around quite a bit trying to solve the mystery of Ashley and of his father's death, rarely turning to his uncle for help.

Neither Coben's prose nor his storytelling is extraordinary in this book, but it's not a bad series start. Shelter is a pretty solid adventure which should appeal to fans of Alex Rider and the like. Of course, while the Ashley story wraps up, the author leaves the door open for a sequel that will continue to pursue the mystery of Mickey's father.

There's definite reluctant reader appeal here, with an easy style, plenty of action and suspense, and a likable main character. I suspect Book 2 will take hold even more successfully. And I look forward to seeing more of Ema and Spooner!

Note for Worried Parents: This is a book for teens, with some peril and violence, as well as a mature plot about the sex trade—though it is handled fairly tastefully and the good guys win. Also: Take a look at Harlan Coben's website, where you can find a book trailer for Shelter.
Posted by KateCoombs at 6:52 PM