A Review of Circus Galacticus by Deva Fagan

I hang out with Deva over at the Enchanted Inkpot, so I heard about her new SFF some time ago and have been looking forward to it ever since. After all, while the idea of an unhappy child running away with the circus goes back a long way, the idea of that circus being intergalactic is all new! 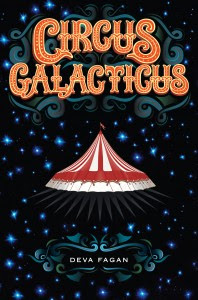 a boarding school aptly named Bleeker Academy where everyone looks down on her. Popular Della bullies Trix, but Trix is the one who gets in trouble with Headmistress Primwell, who is quick to remind her that she is a charity case and therefore should be grateful and cooperative. (Shades of Miss Minchin!) To punish Trix for Della's latest infraction, Headmistress Primwell refuses to let the girl go to the state gymnastics meet.

Meanwhile, the circus has come to town. Why is it that Trix can see more in the circus posters than anyone else? (I'll confess that I thought this book would have humans openly journeying through space, but instead, the people of earth are unaware that the circus travels across galaxies.)

There's something special about Trix, and not just because she is the keeper of a mysterious chunk of space rock.

Pretty soon a creepy alien is trying to get the rock away from Trix, and yes, she is running away to join the circus, which is led by the charismatic Ringmaster with the assistance of a cold-hearted computer entity, Miss Three.

You'll find a touch of Hogwarts in this section as Trix settles in with her roommate and tries to get along with various cliques in the circus. (Thanks to another fantasy trope, the spaceship/circus is a lot bigger inside than it looks.) Because Trix has no magical/super-scientific abilities such as telekinesis, she is assigned to work with the clowns. In this stage of the book, Della is replaced by a new mean girl called Sirra, while Headmistress Primwell is replaced by the hostile Miss Three.

Of course, joining the circus brings up new mysteries for Trix to solve, and the alien from the evil Mandate is still after her meteorite.

Fagan gives us a theme of self-worth ("Am I special or not?") as well as a grand conflict between an imperialist/authoritarian government and freedom-loving rebels.

I will mention that the Ringmaster has a nearly Edward Cullen-esque romantic appeal, but Fagan makes sure that Trix notices this here and there without getting too YA of a crush on the guy. The Ringmaster may also remind you of Pierrot because of his melancholy, solitary nature. Or you may find him more like Willy Wonka, or perhaps Dr. Who.

Trix herself is a likable main character, though often filled with self-doubt. Thrust into a great adventure, she embarks on her role of heroine with good sense, creativity, and determination.

The author's style is clean and reader friendly. Here's a sample:

Miss Three's simulacrum winks out, her taunting smile lingering in a ghost of photons. Nola starts packing up her tools, moving about as slow as molasses. She gives me an encouraging nod, but there's a worried crinkle between her eyes. I try to smile back. Then finally she snaps the toolbox closed. The door shuts behind her, and I'm alone with the Ringmaster.

I stand miserably, trembling all over from the aftereffects of the test and the fear of what he's about to say.

"So, would you prefer nachos or cakes?"

"Ah, you're quite right. Why choose? We'll have both. Excellent!"

I stare at him, wondering if one of the aftereffects of my thrashing is hallucinations.

Oh yes, the book is written in present tense. I didn't find this distracting, however. Circus Galacticus is a fun new take on science fiction for the middle grade/tween reader, with action and suspense building alongside moments of comedy. It's also one of those books that leaves you eager to read the sequel.

Note for Worried Parents: There's a little peril here and a hint of romantic attraction. I think the book will be most appealing to the older end of middle grade, the 10- to 13-year-old crowd.

Also: I requested a copy of Circus Galacticus from Amazon Vine. It will be on shelves November 15.

Finally: Check out Deva's blog, where she talks about Circus Galacticus and shares the book trailer.

I was wondering if you had an email where I can contact you in regards to reviews some picture books.

I'm looking forward to this one--I have a nice juicy ARC waiting for me!