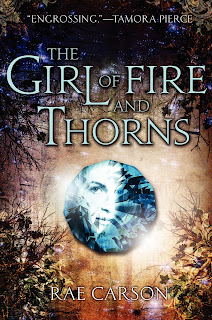 ike the premise: What if the Chosen One were kind of a schlub? An insecure, overweight second princess with a pretty serious eating disorder? And she's married off to a too-handsome young king who, while not unkind, has ulterior motives? Then there's the trip through the jungle, where they're attacked by the forest people. Elise shows her hidden steel in this encounter, mostly because she can't think what else to do besides get her maids out from under a burning carriage and try to stab the bandit who's about to kill the guy she just married.

What's nice is that none of this seems unrealistic. Elisa fumbles around, often getting things wrong and misreading people, then occasionally showing flashes of potential and good sense. It would seem her lessons and reading over the years haven't been entirely wasted.

World building? You got it. The setting is reminiscent of sixteenth- or seventeenth-century Spain and North Africa, but this is a place where every hundred years or so, one baby has the blessing—or curse—of being the bearer of the Godstone, a jewel-like object that is embedded in their young navels by a shaft of light. The Godstones appear to be magical, but mostly seem to set their bearers up as handy targets who only occasionally live to do anything deemed truly heroic. Or so it seems. Carson has interesting things to say about heroes in this book.

In addition, she creates an intriguing religion in which worshipers are ceremonially pricked by a rose held by the priest as part of church services. The implication is that blessings are only bought through pain. There's a vague feeling of Medieval Catholicism to the religion and, indeed, to Elisa's culture, but the author goes on to make this material into something fresh.

It's really a joy to accompany Elisa as she tries desperately, and on occasion petulantly, to figure out just who she's supposed to be, including the history of her predecessors. That's even before she gets kidnapped by a whole new faction.

And just when you think Elisa will be able to show her awesome superpowers—she doesn't. She can't. Which means she has to get out of more than one tight situation by just being gutsy and using her head, after which things often backfire in unexpected ways. Of course.

I will note that there is some political maneuvering here that reminds me a little of the goings-on in Megan Whalen Turner's Thief series as Elisa gets more involved in court life and in plans for handling a coming war.

Plus you get some crazy action-adventure involving spies, guerrilla warfare, and enemy sorcerers.

Elisa eventually loses weight, but it's not because she goes on a diet; it's just an outcome of the situation she's in. Thus, while her weight loss is admirable, it's not pushed on the reader in a preachy manner. Instead, it's presented as part of her overall struggle and character growth.

Consider this a coming-of-age story. Elisa becomes a better person and a leader mostly because events conspire to force her hand. Her development is no less satisfying because of its impetus, however. When things get tough, Elisa takes action, despite her self-doubt.

The author's writing is very well crafted. It has a slightly formal tone that seems entirely appropriate to its apparent time frame and Elisa's educated, though personable, voice. Take a look at this passage, when the carriages bringing Elisa to her new home are about to be attacked:

The jungle rages with noise. Screaming birds, chittering spider monkeys, and buzzing insects all battle for attention. The wind cannot penetrate the foliage to cool us as we travel, but we hear it, whooshing through the canopy above. It is, truly, the most deafening place I've ever been.

On the morning of day four, the jungle goes silent. It happens so suddenly, so profoundly, that I peer around the curtain, expecting to find that God has whisked us to another time and place. But the silk-cotton trees still loom above me, their dark buttresses impenetrable in the filtered light. The same palm fronds twist desperately around them, seeking sunlight.

Two carriages ahead, Lord Hector drops from the roof to the ground, sword in hand.

Our procession has been large and clamorous with its carriage wheels, snorting horses, and clanking armor. Yet the jungle never saw fit to honor us with silent fear. Beside me, Lady Aneaxi mutters in prayer.

You do get a few melodramatic moments in this book, including a bit of romance in spots, but the overall storytelling is just plain terrific. The characters are also rich, especially Elisa herself and her maids. The young king, Alejandro, is more complicated than one might expect—not Prince Charming, but still a person with problems of his own. Elisa is his second wife (the first one died), and she has some great interactions with her husband's young son as well as with his hangers-on.

You'll be glad to see that the princess who starts off handling every problem she encounters by stuffing her face with pastries winds up facing down an enemy invasion with considerable courage. Fortunately for anyone who finds this first book as marvelous as I did, Rae Carson is busy writing the rest of a planned trilogy about our girl Elisa and her Godstone.

Note for Worried Parents: There is a little talk about sex in this book, but it's pretty discreet. Elisa doesn't actually sleep with her new husband, partly because he has a mistress and this is a political marriage. The Girl of Fire and Thorns is a teen book, with some mature storytelling and themes, but it's not too rough. You will come across some violence as a result of warfare.

Also: Check out Rae Carson's website or watch this video in which the author rather charmingly introduces her new book.

Book Picks: If you like this book, try Princess Ben by Catherine Gilbert Murdock, The Blue Sword by Robin McKinley, and the Queen's Thief books by Megan Whalen Turner.
Posted by KateCoombs at 4:55 PM

This sounds fantastic, thank you! Ironically, I just posted something on my blog about making your characters "messy." I love that she's imperfect.

And I love me some good world-building. Going on my goodreads to-read list now.

Great review. I've heard such good things about this and I love that she starts out overweight. I have my copy of this book and can't wait to read it.

TAN--I love the idea of making your characters "messy." Exactly! I do think you'll like this one.

Natalie--Thanks! Let me know what you think...

Really? That may be good news for me.

I don't know why it is, but maybe something about being in charge of ordering YA for my library now-- but I've become so overloaded reading reviews that I suddenly don't care about READING the books anymore. I instead say "That looks like a good book to buy!" but can't work up the desire to actually READ anything. I think I do need something REALLY UNIQUE to break me out of my rut... so if you want me to sit up and take notice? This might just work.

Amy--I've felt like that sometimes, much as I hate to admit it. Just--bleah.

GOFAT (ha!) isn't the perfect book, but it really grabbed me. And it struck me as a fresh take on fantasy after a lot of sameness.

I'm convinced: shall go out and look for this book ASAP. Isn't it great that after all the books ever written, it's still possible to have a fresh take?

Amy--for more uniqueness, try Laini Taylor. I just finished Daughter of Smoke and Bone and it was very different. (And good!)

Oh, just noticed that Kate just reviewed Daughter of Smoke and Bone! So, I guess I second her recommendation. (Now you know you have to read it!)

Kim--The titles do sound similar, don't they? Glad you liked Daughter of Smoke and Bone, too!