A Review of A Beautiful Friendship by David Weber

If you are a fan of adult sci-fi, you may be familiar with David Weber's Honor Harrington series. I've read most of the books, and while they can get bogged down in lengthy descriptive, technological, or political passages, I really like Weber's space opera heroine. Now the author joins the ranks of adult writers crossing over into the hot YA market with a prequel novel about an ancestor of Honor Harrington named Stephanie. 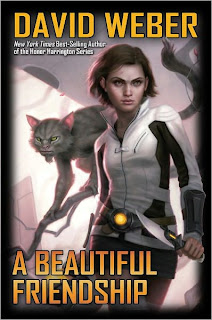 Stephanie's parents have moved the family to a colony planet named Sphinx in the Star Kingdom of Manticore. An aspiring zoologist/botanist and forest ranger, Stephanie is excited until she is told that she cannot explore the forests around her new home without adult supervision. After all, the planet is home to some very dangerous species, most notably the hexapuma, an oversized puma-like predator. Stephanie's parents try to keep her occupied by giving her glider lessons, and her mother challenges her to solve a mystery: who or what has been stealing small amounts of celery from the colonists' experimental farms and greenhouses?

Then we hit Chapter Two and find out that Stephanie's isn't the only point of view in the book. Many of the chapters are presented from the perspective of Climbs Quickly, a member of the sentient species that will come to be known to humans as treecats—imagine a six-legged cross between a squirrel and a cat, with the forepaws more like a monkey's and therefore capable of using tools. For now, though, Climbs Quickly and his people are keeping out of sight of the "two-legs." Spying on them, even. So far, only their incredible attraction to celery puts them at risk for discovery.

What's really fun is that the treecats (who, like most tribal societies, call themselves the People) are trying to figure out if the two-legs can communicate with each other. The treecats communicate mind to mind, and their initial observations lead them to call the new species they are observing "mind blind."

After Stephanie sets about solving the mystery of the celery thieves, she and Climbs Quickly cross paths. Their meeting is all the more astonishing because Stephanie and Climbs Quickly form an unexpected psychic bond. The discovery of a new sentient species is big news, but Stephanie keeps it to herself for the time being. When the girl takes an ill-fated glider trip over the forest to hone in on Climbs Quickly's psychic location, she runs into trouble. Only the intervention of the secretive treecats can save her. But that would mean blowing their cover...

As the story evolves, some interesting ideas about what it means to be sentient are bandied about. In addition, we see how politics affects interactions with primitive tribes, let alone brand-new species. Stephanie becomes the treecats' champion, but just how well can a twelve-turned thirteen-year-old protect these beings from the various human threats that stalk them?

Stephanie finds a few allies and makes mistakes, but she is able to rescue her new friends, who have previously rescued her. Her bond with Climbs Quickly (or Lionheart, as she names him) doesn't overcome all of the language barriers between the two species, but it's a start.

Besides a broader environmental theme, A Beautiful Friendship addresses how advanced civilizations assess and affect less civilized groups. You'll probably smile, as I did, when you hear how one scientist tries to explain away the treecats' net-weaving activities on the basis of animal instinct. Climbs Quickly's people are hunter-gatherers, but they begin taking notes on what the humans are up to right away and apply some of what they have learned.

The author does wax pompous in spots, and the storytelling isn't always fast paced. But I thought that overall, the suspense built nicely. I especially liked seeing the difference between Stephanie's point of view and Climbs Quickly's viewpoint.

Young Stephanie, like her descendant, Honor, is a great character. She is smart, strong, stubborn, brave, and completely fallible. Our heroine's high-tech hang-gliding, along with her grace under pressure, add to the more adventurous parts of the plot.

I also appreciate the author's efforts to be properly scientific, e.g., by explaining how an alien species would be able to digest a human-grown plant. Another fun fact is the way the massive, terrifying hexapumas have a healthy respect for what an entire throng of angry treecats can do.

Fans of the adult Honor Harrington series will either love this book because it gives them a glimpse of the heroine's heritage (and because they get the celery reference right away) or hate it because it's written for a younger audience, but preteens and teens who like science fiction or even animal stories will probably enjoy A Beautiful Friendship.

Note for Worried Parents: There's some animal violence, shooting, and peril here. Even though the book is listed as YA, I think it's an appropriate read for the science-minded tween crowd, maybe 10- to 12-year-olds.

Book Picks: If you like this book, try Starswarm by Jerry Pournelle, the Dragon and Thief books by Timothy Zahn, Fledgling and Saltation by Sharon Lee and Steve Miller, Flight of the Outcast by Brad Strickland, and Citizen of the Galaxy by Robert A. Heinlein.

Update: Thanks to the anonymous commenter who pointed out that this book is not about a young Honor Harrington, but about an ancestor of hers named Stephanie. Corrections have been made accordingly.

Posted by KateCoombs at 4:01 PM

BTW the main character's name for this novel is Stephanie... not Honor

...and Stephanie isn't the 'young Honor Harrington' but rather an ancestor of Honor... from 400yrs before Honor is born

Good point! I'll fix that! The adult character was stuck in my head, apparently. :)

Sigh. I will get this right! Thanks for your help.