This is one of those books I wanted to read mostly because of the title, also because it seemed to have that Cohn/Levithan flavor. While Au Revoir is certainly a clever read, it zooms by a little too fast and will most certainly make you think of a screenplay treatment (as another blogger pointed out—can't remember who!). Big surprise: I did a Google search and discovered that this book is already being made into a movie. Oh, and the author is another crossover from the adult side. He's been writing horror novels. 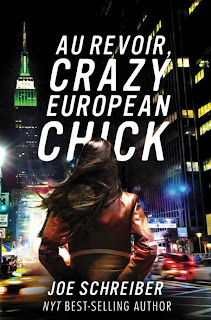 So. You are likely to feel like you are reading a movie novelization with this one, and you wouldn't be too far off. Check out the action flick premise—a teenage boy has had a dull Eastern European exchange student staying at his house for a few months. Unlike the girl in Better Off Dead, this one is not attractive. She lacks social skills, too, and Perry Stormaire has been razzed by his friends for having her around. Even so, he has persisted in being kind to her. Then, just when his band finally gets a gig, his parents make him take Gobija to prom instead.

Pretty soon we've got what the book jacket copy bills as "Ferris Bueller Meets La Femme Nikita" because Gobi turns out to be, not only more hot than previously anticipated (Where are Clark Kent's glasses when you need them?), but also a woman with a mission. The kind that involves getaway cars (Perry's dad's Jag, to be precise) and flying bullets.

Perry handily plays the scared-but-decent schmuck in this scenario. He even gets to stop by for his band's performance. Meanwhile, the bullets just don't quit. Neither do Perry's gripes, shrieks, or attempts to escape. But one way or another, Gobi's going to get the job done. Leaving Perry to figure out just what she's up to, and why.

During the course of the evening, these two form an odd and somewhat romantic bond. Teens might get a kick out of the non-stop action and humor here, but actual readers may find themselves annoyed by the lack of multi-dimensional storytelling, not to mention by an overall sense of being commercially manipulated. That evokes an analogy, doesn't it? You, the reader, can be hapless Perry, while the marketing machine can be dark, driven Gobi. She basically holds him captive, as you can see in this passage:

She glanced at the lit office window twelve floors off the street, then back at me. "Here," she murmured, leaning over to wrap the plastic handcuffs from her bag around my wrists.

She hooked the restraints through the Jaguar's steering wheel, cinching them to the skin.

She reached into the bag and took out the gun I had seen earlier.

She got out and sank into the shadows half a block off Pearl Street, a Lithuanian ninja. I jerked tentatively on the wrist restraints but that only made them tighter. She had left her bag sitting on the passenger seat, and I wondered what else she had in there—passports, more weapons, a bazooka?

Thematically speaking, we learn that Perry's dad has been really hard on him and kept him from developing his own identity. I'm not sure this works because the speed of the plot doesn't leave much room for it to be convincing. Gobi's mysterious backstory also suffers from the pell-mell pace of the book. Schreiber does manage to throw in a few plot twists, which I appreciated. The one truly great thing about Au Revoir is the chapter headers, each a supposed entrance exam essay question from a university. I think my favorite is "You've just written a 300-page autobiography. Send us page 217. (University of Pennsylvania)."

I won't say it wasn't fun reading this book, but I do feel a little cheap after the fact, as if my virgin strawberry margarita wound up having alcohol in it, maybe even a roofie.

Note for Worried Parents: There is a lot of violence in this one, as well as a couple of mature plot details having to do with sex. The book has a kind of comic book feel, however, so it's not as bad as it sounds. Still, we're definitely talking teens.

Also: I requested a copy of this book from Amazon Vine. Au Revoir, Crazy European Chick will be on shelves October 25.

You can watch the book trailer here.

Posted by KateCoombs at 6:41 AM