A Review of Tuesdays at the Castle by Jessica Day George

The main character in this book is arguably Princess Celie, but the Castle itself runs a close second, often stealing the stage. This self-remodeling castle usually rearranges itself on Tuesdays, but has been known to surprise people on other days. If you are a visitor, you had better hope the Castle likes you. It will give you an ugly, cramped little guest room with few comforts if it does not. 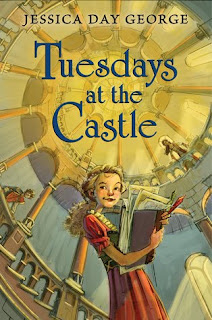 Celie and her siblings see their parents off on a journey, but then King and Queen Glower disappear in an ambush and are presumed dead. Creepy Prince Khelsh comes to visit almost immediately. He offers to help, but is obviously intent on stealing the throne from Celie's teenage brother Rolf.

Other key characters include Celie's older sister Lilah, a helpful commoner named Pogue, and another visiting prince, Lulath, who seems to care for nothing but his fluffy little yappy dogs.

It's important to understand that the magical Castle has historically held the role of choosing the next monarch. The Castle has already selected Rolf as Crown Prince, but does it think young Rolf is ready to be king?

For that matter, can it be that some of the kingdom's ministers are scheming against Rolf?

What follows is a cat-and-mouse game as the royal children—especially Celie—spy on the "guests" and try to find out what really happened to the missing king and queen. But even with the Castle on her side, all does not go smoothly for our girl Celie. The action escalates nicely to a final showdown and resolution.

I really enjoyed seeing the various ways the Castle helped Celie and the ways it expressed its more-than-brick-and-mortar personality. The pranks Celie and her siblings play on their unwanted guests are another fun piece of the action.

Jessica Day George's work has a cheerful, imaginative middle grade feel, a nice change from so many darker, YA-influenced books. George is more of an Eva Ibbotson type than, say, a Neil Gaiman. I'll give you an excerpt so you can see what I mean:

She paused for just a moment in the hallway, but she heard Lilah say, "Oh, let her go, Rolf. She's determined to be difficult."

So Celie stomped off down the hall. She found some stairs, and climbed them, and then a hallway and more stairs and just kept going. She didn't have her atlas with her, and wasn't sure she'd ever seen this particular staircase, but she was trying too hard to hang on to her disagreeable mood and told herself she didn't care if she got lost.

Not that she thought she'd get lost. All of the royal children knew the Rules very well, and besides, it was fairly obvious that the Castle liked them. But Celie was trying to make an atlas of Castle Glower, the first ever, and normally carried colored pencils and paper with her to sketch anything she hadn't seen before. So far she had three hundred pages of maps, and could get to most of the major rooms (Winter and Summer Dining Halls, Chapel, Library, Throne Room) in record time as long as the Castle wasn't bored and looking to stretch.

The interplay between siblings, the invasion by nefarious "ambassadors," the treachery within the kingdom, and the ongoing question of just what the Castle will do next make this a light and delightful read for the fantasy crowd, especially those with a fondness for rambunctious princesses and magical architecture.

Note: I requested a copy of Tuesdays at the Castle from Amazon Vine. This book will be on shelves October 25.

Visit the author's website for more info about the book, as well as signings, etc.