A Review of Dodger by Terry Pratchett

How did Charles Dickens come up with the character of the Artful Dodger for Oliver Twist? According to this book, the journalist and serial novelist met a street-smart teen who served as the basis for the character. That would be a great premise all by itself, but Pratchett takes it a step further—the book is told from the perspective of Dodger. It is also, according to the author’s note, historical fantasy. Since you won’t come across a shred of magic here, you might find yourself wondering why. Here’s how the author puts it: “This is a historical fantasy—and certainly not a historical novel….” I would say it’s historical fantasy because Dodger performs feats of derring-do that are sometimes a little over the top. Feats, in fact, worthy of a Dickens novel. Or maybe a James Bond movie. (Spy books and movies are secretly fantasy novels, I’ve always thought.) Joan Aiken would be proud of this book, which channels the kind of fantasy/adventure writing you'll find in her Wolves of Willoughby Chase and the rest of the series. So. Strict fantasy? No. But Dodger requires a certain suspension of disbelief. It is also one of the best books I’ve read all year.

This is approximately one-fourth due to the adventure and secondary characters like Charles Dickens; it's three-fourths due to the central character. We learn that Dodger is a tosher. Not only that, but he’s a geezer. Here’s a minor villain explaining to the major villains what they’re up against:

“A geezer is somebody that everybody knows, and he knows everybody, and maybe he knows something about everyone he knows that maybe you wished he didn’t know. Um, and well, he’s sharp, crafty, um, not exactly a thief but somehow things find their way into his hands. Doesn’t mind a bit of mischief, and wears the street like an overcoat. Dodger now…well, Dodger’s a tosher as well, which means he knows what’s going on down in the sewers too—a tosher, sir, being somebody who goes down there looking for coins and suchlike that may have been lost down the drain.” 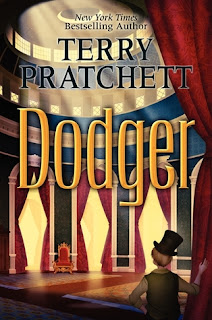 Dodger mostly considers himself a tosher. He’s even been known to pray to the Lady on occasion. She's the patron saint of toshers—a beautiful woman with rats swarming happily over her feet. But Dodger is meant for something more. It all begins one night when he’s in the sewers and hears a cry for help. He pops out and sees a girl trying to get away from two men in a coach. I should mention that Dodger is a fierce street brawler. He bashes up the men rather handily and takes off with the girl. Here’s where he runs into Charles Dickens and his friend Henry Mayfield. Once they have convinced him of their integrity, he allows them to convey the girl, who has been badly beaten, to Mayfield’s home to be cared for by Mrs. Mayfield. But Dodger comes along to make sure everything is on the up and up.

Then Charles Dickens takes an interest in Dodger and hires him to find out who the girl is. Not only does Dodger have an instant crush on the girl they begin calling Simplicity, but he’s also intrigued by the challenge. He begins asking around—which is what brings him to the attention of the villains. The adventure escalates and escalates in, well, true Dickensian fashion. With a little bit of James Bond thrown in for good measure.

But I was telling you about Dodger. He is dimensional in a rough and ready way tinged with vague ambitions. Fortunately, he has a mentor in the form of the old Jewish man he lives with: Solomon, of course. Solomon has been trying to teach Dodger just a little honesty and now begins to help him take advantage of the opportunities that come his way because of this new adventure. Solomon is an amazing character; later in the book we start to realize just how amazing he really is. Simplicity turns out to be rather complicated, too. Dodger meets one of the richest women in England, not to mention Benjamin Disraeli, police master Robert Peel and, in a Pratchett tour de force, Sweeney Todd, the Demon Barber of Fleet Street—from whom Dodger seeks a haircut.

I can’t even begin to tell you how wonderfully well all of this is executed. The writing itself is strong, but the ideas are even better. For example, Dickens teaches Dodger about the way journalists spin stories, explaining it using fog as an analogy. We see variations of London fog crawling here and there in the story to reinforce the theme. Then Dodger coopts the metaphor in a truly useful way as his life careens down the increasingly dangerous streets of the city. For example, Dodger meets Disraeli and draws his own conclusions. Here he talks to Solomon about it. The old man is describing social stratification. “Intrigued, Dodger said, ‘Am I downtrodden?’” The old man answered:

“You? Not so you would notice, my boy, and neither do you tread on anybody else, which is a happy situation to be in, but if I was you I shouldn’t think too much more about politics, it can only make you ill.”

Dodger may not think a lot about politics, but he knows how to play people. After turning into a reluctant hero to the entire city and laying his fists about in a couple of dark corners where he is meant to die, Dodger hatches an elaborate plot to save Simplicity. Then he takes an odd crew a-toshing in the sewers, where he meets up with the worst of the villains hired by the major bad guys to kill him.

Pratchett has a marvelous time with his conclusion, which is unexpected and unbelievable and absolutely perfect. But the book sings because of the people in it. I have long admired Pratchett for his talent with characterization, and here he does it again—in spades. Dodger’s dodgy yet sincere thought processes are a compelling, heart-warming mix of an utter lack of morals combined with a true-blue determination to put certain wrongs right.

We also get Pratchett’s signature humor, though it’s considerably toned down in this book as compared to the satire in the Discworld series. The passages about Dodger getting a better class of clothing, first in a shonky shop and later on Savile Row, are a prime example, along with the follow-up joke that will make you think of celebrities wearing the same designer dress to a fancy party. A lot of the humor has to do with Dodger as a fish out of water, but Dodger is so valiant and so aware of himself in the world that he is not, after all, the brunt of disdain. All of this struts its stuff on the stage of filthy, colorful nineteenth-century London.

You simply can’t go wrong with this book.

I’m not crazy about the trailer—Dodger isn’t tough enough and the fight is too slow paced. But watch it if you want.

Also: This cover is not the best ever, but I think the UK cover is worse. It's just doofy. Good thing the inside of the book is so wonderful!

Note for Worried Parents: Dodger is a book for teens, with a good dollop of peril and violence plus a few relatively mild references to prostitutes and just basically the sordid nature of the streets. And there’s a joke you wait for the whole book due to the unfortunate name of Dodger’s very smelly dog. Even that is not spelled out, though. In general, it’s just a mature book about an older teen character.
Posted by KateCoombs at 10:51 AM

I have seen such mixed reactions to this novel that I can not wait to read it for myself.

I have actually NEVER read a book by Pratchett. (Hangs head in shame.)

Also I'm not a huge fan of Dickens. Love A Tale of Two Cities. Hate everything else. But it sounds like you don't need to be a Dickens fan to like this so...

Brandy--The world is Dickensian, but the writing is not. Perhaps you could try The Wee Free Men or Nation, too. His Discworld books are like Douglas Adams' Hitchhiker books, only they're fantasy. I've noticed that sometimes Pratchett's plots lag in spots, but the writing and the characterization make up for it. Anyway, I'm curious to see what you think!

I totally agree with the recommendation of The Wee Free Men as an introduction to Pratchett's writing. I haven't yet picked up Dodger and wondered how it was. I've read just about all of his books, except for maybe three.

This looks fantastic. Another one for the list so, sigh!

Oh, I'm so excited! I was afraid Pratchett wasn't writing anymore. This one sounds marvelous: thanks for blogging about it!

Kim--Me, too. I will say you should avoid the adult book he supposedly wrote with a co-author (The Long Earth); I suspect he wrote about three sentences of it, and I could tell you which ones. :)