A Review of The Unnaturalists by Tiffany Trent

In a steampunky new London powered by “myth,” a substance which is supposedly mined but actually has far more dire origins, Vespa assists her father in studying and even stuffing the Unnaturals, beasts like the Sphinx and little sylphs. But these imperialist scientists are denying what a boy named Syrus and his fellow Tinkers camping out on the edge of town already know—that the Unnaturals are sentient and are being exploited by the Empress in horrible ways. 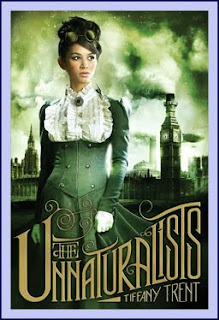 The book is a dystopian fantasy, but it doesn't have a futuristic feel, so don’t let the genre make you think you'll be getting the usual post-apocalyptic fare. Instead you'll feel like you're in the nineteenth century as you follow Vespa’s perils and her attraction to a young Pedant named Hal, along with Syrus’s creepy adventures as he tries to fulfill the request of a great Unnatural in the forest to find the witch who lives in the city. Of course, that would be Vespa, but witchcraft is forbidden, and there’s a reason hers is just now beginning to make itself known. Then there’s her father’s assistant, the slimy Charles, who is also more than he seems. A group of vigilante magic-makers called Athena’s Architects rounds out the picture. Well, not counting a variety of creatures, including a particularly awful type of werewolf.

Vespa first meets Syrus in a way guaranteed to make her distrust him, which complicates matters when he finds out he must bring her to the forest. Hal is also not at all forthcoming about his plans, which leaves Vespa scrambling around trying to find out what’s going on. What she does learn changes everything she’s ever believed in. Here's a look at Vespa the young scientist as she travels through the Forest, where magic still hides:


The Wad and I both nod and follow him outside. Trees rustle their flaming robes along the road. We're in the Forest. Instinctively, I make the sign against irrationality to protect myself from pixie infestation. It's all I can do, since we've had no time to don nullsuits, if Father and Charles even remembered to bring them. Most young ladies my age would be terrified if they found themselves so unshielded on a Forest road that's likely teeming with Unnaturals.

I like Vespa for the most part, though I think Syrus is the more interesting character. The interplay between these two and Hal makes for good storytelling. One thing that struck me, though, is that Vespa’s story is told in first person, while Syrus’s is told in third person. It isn’t that distracting, but it just seems like an odd choice.

A major theme of the book is the clash between magic and science, or the numinous and the rational. Vespa starts out as a logical, scientific young lady, but she soon learns that the facts she’s been told about the world aren’t especially factual. She also discovers that she is not who she thought she was, and neither, in his way, is her father. This seems like a nice bit of symbolism for young adult readers who are busy trying to define themselves as someone other than their parents.

The Unnaturalists is a good read for anyone who enjoys steampunk and historical fantasy of the YA variety. Join Vespa in discovering that science isn’t everything, and magic is real.

Note for Worried Parents: This is a YA book, but I don’t think there’s any reason it can’t be read by older middle grade readers, especially 10- to 12-year-olds.
Posted by KateCoombs at 7:13 PM