A Review of Throne of Glass by Sarah J. Maas

The Hunger Games meets Megan Whalen Turner’s Queen’s Thief series. I’m not saying it’s as well written as Turner’s books, but then, most things aren’t. It is, however, a good series start that mixes fights to the death with palace intrigue.

Eighteen-year-old Celaena Sardothien is the best assassin in the entire region, if not the known world. This is not as Mary Sue as it sounds because Celaena has paid dearly for her knowledge and abilities. She is currently locked up in a horrible prison camp, though she was only caught because someone betrayed her. Now a prince has come to free her so she can represent him in a contest to become his father’s assassin. Murderers and assassins from all over the kingdom and beyond are gathered at the tyrant’s glass palace for the competition. 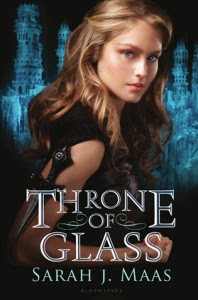 Celaena is confident even though prison life has taken a toll on her health. Her keeper and trainer is a guard captain named Chaol. Against their better judgment, both he and Prince Dorian are drawn to Celaena. So yes, this one has all the ingredients for a typical paranormal/fantasy, with two hot, powerful guys falling for our heroine. But Maas mostly manages to write her way beyond the clichés. She does this by making her characters complex and by making us care about them. In addition, the plot takes some nice twists and turns. These are practically gothic, involving creepy deaths, a hidden chamber, uncertain alliances, and conspiracies. All of this is very fun and makes Throne of Glass a swooshing ride of a story.

Celaena is the best, but she’s up against some scary competition, particularly a giant of a man named Cain. The final battle is not what you are expecting, which is a very good thing from a storytelling standpoint.

Along the way, Celaena has moments of romance or at least connection with both of the men in her life. She also makes friends with a foreign princess named Nehemia and the ghost of a famous queen.

The fact that Dorian’s father is a terrible man adds to the plot tension. If Celaena does win, she will have to work for the person who has conquered and essentially destroyed many kingdoms, including the one she came from. We get a few faint hints that Celaena may be a lost princess, kind of like Princess Anastasia surviving the deaths of the Romanovs.

The supernatural elements blend nicely with the rest of the plot. There’s an evil magic powering the bad guys’ nefarious plans, and Celaena has connections to its opposite number, the good magic. None of this is overdone.

One of the most interesting things about the story is the way Celaena is maneuvered by people like the prince and Chaol. And by maneuvered, I mean that she is a prisoner. She is locked in her chambers under guard, and she is constantly being told what to wear and where to go. How can she maintain her sense of self and plan for her future? She finds ways, but always within the constraints laid upon her. The glass palace is a strangely successful metaphor—like her life, it is transparent and fragile, yet obscure and powerful at surprising moments.

The writing itself is ordinary, even a bit purple in spots, but it does the job. Here is Celaena exploring a hidden passageway deep beneath her rooms.

Celaena soon found herself before the other two portals. What other disappointments would she find in them? She had lost interest. But the breeze stirred again, and it blew so hard toward the far right arch that Celaena took a step. The hair on her arms rose as she watched the flame of her candle bend forward, pointing to a darkness that seemed blacker than all the rest. Whispers lay beneath the breeze, speaking to her in forgotten languages. She shuddered, and decided to go in the opposite direction—to take the far left portal. Following whispers on Samhuinn could only lead to trouble.

Follow the whispering passages with Celaena and see what you find. I was afraid I wouldn’t like this book because of its “fighting assassins” premise, but that’s a surprisingly small part of the plot. The palace intrigue makes the book much richer than I expected. I think you’ll like this one.

The trailer’s not bad, maybe because it doesn’t attempt to be narrative.

Note for Worried Parents: Another teen book with violence and mature themes. Nothing too awful for teens, but not well suited for the under-12 crowd.
Posted by KateCoombs at 10:28 AM