I already liked Shelley Moore Thomas’s books, the Good Knight series, which are picture books and easy readers about the interplay between a very patient, kindly knight and three difficult yet sweet little orphaned dragons. So of course I was excited to read her middle grade fantasy, The Seven Tales of Trinket. 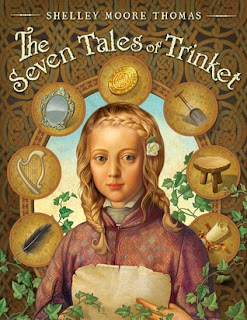 This book is deliberately episodic and self-reflective, which is a little tricky to pull off. Fortunately, Thomas pulls it off. We follow a girl named Trinket and her friend Thomas the Pig Boy as they travel to find out what happened to Trinket’s father, a handsome bard who has been missing for years. Along the way, Trinket also collects stories, turning each one into a song. The stories are Trinket’s and Thomas’s adventures, but they later become tales that Trinket tells in other villages.

To give you an idea about their adventures, I’ll just list the chapter titles, which are numbered tales: “The Gypsy and the Seer,” “The Harp of Bone and Hair,” “The Wee Banshee of Crossmaglin,” “The Faerie Queen and the Gold Coin,” “A Pig Boy, a Ghost, and a Pooka,” “The Old Burned Man and the Hound,” and “The Storyteller and the Truth.” As an author’s note explains, Thomas’s tales are based primarily on Celtic folklore. But the author adds her own twists in the telling, created dimensional characters as she goes.

The language is clean and clear, with occasional touches of poetry to burnish the narrative. For example, Thomas the Pig Boy is always hungry. He explains, “Never was a lad born with as fierce a beast in his belly as myself.” And here's my favorite paragraph:

There were bones on the shore. Bones of large sea beast called whales. Whiter than the clouds, they rose from the rocks like the ghosts of old tree branches. I could hear Thomas gasp at the sight of them.

The tales are touched with humor, magic and intrigue. “As if she read my mind, the dark-eyed girl spoke. ‘You wonder about me, as well you should.’ I paused, my bread midway to my bowl of broth. ‘I am a liar,’ she said.”

Fragments of some of the stories show up in later stories as certain characters reappear for different reasons. The overall arc is Trinket’s search for her father, but as she moves onward, she becomes something in her own right, a singer and storyteller. In fact, a young bard. She also handles herself pretty well and learns along the way, though the book is far from didactic. Thomas the Pig Boy makes a sturdy, if hungry, companion. He and Trinket take turns saving each other when things go wrong. (These are pre-teens, however, and there isn’t the slightest hint of romance between them, just loyalty and friendship.)

The author did something a little different with the ending, and I’m not sure quite how well it flows. However, readers will regain their footing by the last page and will be very glad they’ve read Trinket’s seven tales. Shelley Moore Thomas’s Good Knight books are charming, and so is The Seven Tales of Trinket—a well-paced, magical middle grade read.

Note: You can watch the book trailer for The Seven Tales of Trinket here.
Posted by KateCoombs at 9:04 PM

You've made me want to read this--thanks!

Thanks for reviewing The Seven Tales of Trinket, Kate. Words cannot describe how much I value your opinion.

I am honored to be counted among your reviewees.

Oh, you're welcome, Shelley! What a great book!