It’s Tongue-in-Cheek Week here at Book Aunt as we talk about three picture books I think parents will like because the humor works for them as well as (in a somewhat different way) for young readers. Do try to keep a straight face.

This is an extremely simple story that—Neil Gaiman hype or no Neil Gaiman hype—needs just the right illustrations to work. Fortunately, Adam Rex is in the house. Let’s hear a big round of applause for neo goth-cool Gaiman and geek chic-cool Rex! 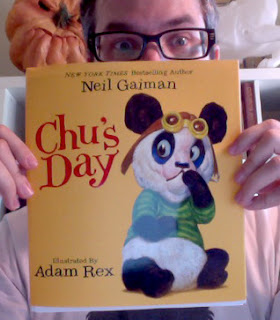 You might like to know that the target audience for this book, which is due out in January (so yep, I’m totally jumping the gun), is the Chinese government.

A few years ago when Neil Gaiman was doing research in China, he learned that his books, such as The Wolves in the Walls and The Day I Swapped My Dad for Two Goldfish, are banned there. Here is part of Gaiman’s own explanation about the discovery that the books aren't allowed in China. (Sorry, but my quote function doesn’t want to allow paragraph returns.)

It was nice to find out that Gaiman specifically requested Adam Rex as an illustrator. Good call, Neil!

Anyway, the entire plot can be summed up as “Aaah— Aaah— Aaah—…Choo!” But be forewarned: little Chu’s sneezes are extraordinary. That’s why, when his parents take him various places and he seems like he’s going to sneeze, they get a little worried. But it’s a false alarm, another false alarm, etc. etc.—until it isn’t. Then WATCH out!

As I said, the plot is fun, but Adam Rex’s genius takes it to another level. First of all, little Chu with his sneeze-pun name is really cute, though just the teensiest bit wild-eyed, in my opinion. He wears a green striped t-shirt and yellow aviator goggles pushed up on the top of his head. He seems at first glance like a Bambi-eyed Disney character, but turns out to be Adam Rex’s truly subtle take-off on such a character. Don't miss the back cover, which is literally a back view of the front cover. Plus snail.

In his signature style (e.g., see Frankenstein Makes a Sandwich), Adam Rex creates an all-animal cast for scenes set in a library, a diner, and a circus. Each spread in these locations is marked by little in-jokes. Check out the mice in the card catalog, the diner name and counter person, and the different animals who are acrobats and their facial expressions at the circus, for example. We also get nice touches like the way a gold ring that’s part of the circus equipment frames Chu’s face right before he loses it. I was especially delighted by the way the locations that earlier escaped Chu’s sneeze don’t go unscathed in the over-the-big-top climax.

Clever premise and good pacing on Gaiman’s part, but Rex’s artwork steals the show. Your 3- or 4-year-old will really like this one.

The final sentence of Gaiman’s explanation about the book? “There is no word yet on what the Chinese government thinks.”

Note: If you like this book, look for an older favorite of mine, My Little Sister Ate One Hare by Bill Grossman, illustrated by Kevin Hawkes.

Also: Thanks to the publisher for a review copy of Chu's Day. Neil Gaiman's note was part of the publisher's materials, so you won't find it in the book. But I'm guessing you can look for it online.

This book has an oddly parallel plot to Chu’s Day, though it may not seem that way at first. We hit that high, high point in the climax, actually. 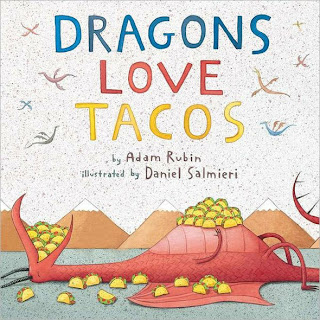 But let’s get down to basics. As the intrusive narrator and even the title explain, “Dragons love tacos.” Check out the cover art: The big pink dragon sprawled out in a taco-drugged haze has at least 9 tacos in his mouth, 15 sitting on top of his belly, and another 12 lying beside him. Not to mention all the ones you can’t see from this angle.

As the book begins, the narrator addresses his dragon/taco “how to” to a boy who looks like he’s about 10.

The kid is obviously the perfect vessel for such knowledge because his bedroom is filled with dragon art, dragon toys, dragon stuffed animals, and dragon action figures. The informative narrator suggests that if the boy wants to make friends with dragons, tacos had better be involved. “But wait!” There’s a caveat here. Dragons like MILD tacos. They hate spicy salsa. “Just one single speck of hot pepper makes a dragon snort sparks.” It also gives dragons tummy troubles.

Our friendly narrator continues to coach the boy, convincing him to throw a taco party and invite all the neighborhood dragons. We find out that dragons love parties, too. The boy gets his hands on positively oodles of tacos. He takes the precaution of pouring all the hot taco sauce in a hole in the backyard and burying it. But he MAY have missed a bottle…

The artwork in Dragons Love Tacos has a fresh new look. The dragons are a bit like birds and a bit like dinosaurs. They come in different colors and manage to show distinct personalities. The little boy has a blocky body with a fireplug head and bowl-cut hair, along with froggy eyes and skinny little arms and legs. His dog is his sidekick. And of course, Daniel Salmieri is the ultimate taco artist: he must have drawn a hundred for this book. (Take a look at the endpapers!) All of this is set on a creamy background speckled with pale brown. Simple but effective.

Watch for the jokes—such as the spread where a dragon, responding to the narrator’s request, plays dead to act out just how much he hates spicy salsa. Also the spread showing how much dragons like different kinds of parties. I know I never want to go to another party that doesn’t have taco balloons, let alone a dragon that flies and juggles tacos at the same time. Shades of the tree party in Go, Dog. Go! It’s a good thing this kid’s parent are never around, especially considering what happens next.

Adam Rubin’s narrator sounds a little like Grover narrating There’s a Monster at the End of This Book. He is certainly full of good advice and warnings. Too bad it doesn’t necessarily work out! But the wry humor should amuse you along the way, and the author throws in a nice twist at the end of the book. Dragons Love Tacos will make a great read-aloud for your kids. I suspect you’ll be having tacos for dinner shortly thereafter, with or without spicy salsa.

Goldilocks and the Three Dinosaurs by Mo Willems

Once upon a time, there were three Dinosaurs: Papa Dinosaur, Mama Dinosaur, and some other Dinosaur who happened to be visiting from Norway.

Yes, Baby Dinosaur (or Bear) has been replaced by somebody presumably occupying the guest room. Though he is rather short. And pay attention to visual details like the phone, which has an extra-long receiver to suit a dinosaur head. The tale continues:

One day for no particular reason, the three Dinosaurs made up their beds, positioned their chairs just so, and cooked three bowls of delicious chocolate pudding at varying temperatures. 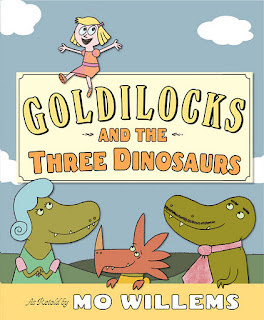 Wink-wink, nudge-nudge. We soon figure out that the Dinosaurs are setting an elaborate trap for the kind of little girl who might be inclined to walk into someone’s house without asking. But this is all conveyed ever-so-slightly indirectly. In other words, your kid is going to LOVE being onto those crafty dinos! Especially when we get lines like: “Then the other Dinosaur made a loud noise that sounded like a big, evil laugh but was probably just a polite Norwegian expression.” (I won’t attempt to reproduce the Norwegian laughing sounds pictured around his head in the artwork, but you get the idea.)

Sure enough, while the Dinosaurs ostensibly go Someplace Else, a little girl shows up and walks into the very large house. Her interaction with the pudding and the chairs is way past hilarious. The phrase “sugar high” comes to mind, and something else is too high, as well. (Don’t miss the asteroids poster on the wall.)

Finally, just in the nick of time, little Goldie gets a clue. And readers get, not one, but two morals to the story.

Kids who know the bears version are going to fall over laughing when they hear this one. I'm pretty sure parents and teachers will be chortling, as well.

Of course, anyone who’s met Pigeon or Elephant and Piggie will not be surprised to find that Willems’ dinosaurs are priceless. Mama’s hair or wig is a shorter, tamer version of Marge Simpson’s—anyway, it’s pale blue. And Papa has this absurd scribbly villain mustache. The two of them are green and sort of T-rex-shaped. The visiting dino is rust-colored and built more along the lines of a Triceratops. Goldilocks, for her part, will remind you of an older version of the kid in Knuffle Bunny. Terrific facial expressions abound.

Mo Willems has captured all the fun of the original tale and then transformed it with his usual panache, wry humor, and appealing artwork.  Another great offering from the undisputed new king of picture book comedy.

Just in case you were wondering, one of the title ideas on the endpapers is Goldilocks and the Three Pigeons. Oh, and the three bears do make a cameo appearance, like aging actors showing up for ten seconds in a hot new action flick.

Note for Worried Parents: I'm sure somewhere some parents will be worried about the dinosaurs' plans to eat Goldilocks, implied by references such as the one to "delicious chocolate-filled-little-girl-bonbons." These would be the parents without a sense of humor. No, really, little kids seem to be unfazed by this sort of threat in fairy tales. They know dinosaurs don't wear ties. And are extinct. But then, you know your kids, so make the call.
Posted by KateCoombs at 7:18 AM

Both of my kids LOVE Dragons Love Tacos.

Bit also loves Goldilocks and the Three Dinosaurs. That one went a little over the 4 year old's head. He was just excited to look for the Pigeon.

Wow, a book written by Neil Gaiman and illustrated by Adam Rex? A must have!

Dinosaurs Love Tacos looks fabulous! I will have to try that one out on my kids.

Brandy, you and your kids obviously have good taste!

Lin--I know, right? And like I said, Chu's Day is deceptively simple. The Chinese government really should take note.

Dena--It's a lot of fun. I like picture books that aren't the same old, same old. :)

Neil Gaiman and Adam Rex? In the same book? Now I know what I'm getting me and everyone else for Christmas.

And I love Mo Willems' sense of humour. Time for a trip to the bookstore!

Kim--You'll have to wait till January for Gaiman and Rex, I'm afraid. But the Willems book is already out.