A Review of The Sweetest Spell by Suzanne Selfors

How often do you read a fantasy about magic cows? Jack in the Beanstalk doesn’t count, of course, because the cow wasn’t magic; it was those beans. And let’s not hear any nonsense about The Black Bull of Norroway. We’re talking female cows, dairy cows that give milk. And when you churn it, it turns into chocolate. Well, that’s only true if you are Suzanne Selfors’s unusual heroine, Emmeline Thistle. Not only is she a red-haired dirt-scratcher’s daughter, but she was also born with a crippled foot and left to die on the edge of the forest the night she was born. A cow rescued her, and ever since Emmeline has had a special friendship with the cows in her village. 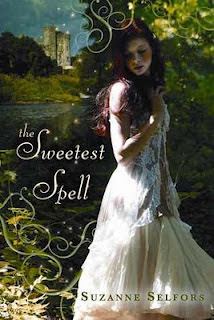 Other than that, her life is pretty bleak. Her mother died and her father hasn’t been the same since. He’s always avoided looking at Emmeline, anyway. And the villagers think she’s unnatural because she didn’t die the night she was born.

When the best-looking young man in the village is up for bid at the village’s husband auction, Emmeline sighs with the rest of the girls even though Griffin is a complete lout who mocks her for her limp. But before the auction can proceed, the king’s soldiers come and take the men of the village away, saying there is a war to fight.

Then there’s a flood, and Emmeline the dirt-scratcher winds up living in the Wanderland with a family of dairy farmers. Her adventures are just beginning, though—she will discover her unusual gift and the role it has played in her kingdom’s history. She will also be kidnapped, meet the Empress, and find out the truth about the war. Oh, and fall in love.

This book makes me feel much better about my own chocolate addiction. It is also a fast-paced, adventurous read. The tyranny of the Empress and what Emmeline does to challenge the status quo give the story a further edge.

One reason I bought The Sweetest Spell is because I’ve read a couple of Selfors’ other books. What I discovered is that she is a refreshingly creative author. She also knows how to create appealing characters—here it’s Emmeline and her new friend, Owen, who take turns telling the story in the first person. As must happen in the best stories, our heroine faces danger and plenty of plot twists before she can make things right.

Selfors tells her tale in an eminently readable style. (Her work reminds me a little of Shannon Hales’s books.) Here’s part of what Emmeline does when the river floods:

Back inside the cottage I grabbed a few belongings—Mother’s rocking chair, the rug woven by Mother’s mother, the wooden bowl that Father had carved. I loaded these into the cart, along with a bag of potatoes and turnips. Water seeped beneath the cottage door. I tucked the two coins into my dress pocket. By the time I’d pulled the last bunch of winter carrots from the sand barrel, water covered our stone floor. The stones had been taken from the river long before my birth, but now the river had come to reclaim them with icy fingers.

The plot of this book is a little out there, but it’s a credit to the author’s storytelling ability that she sucks you in and makes you believe in what happens to Emmeline and the other characters. Plus there’s the chocolate. I mean, what’s not to like?

Note for Worried Parents: This book is for teens, but I think 10- to 12-year-olds would do just fine with it. There are scenes of peril, but nothing more upsetting than in the first few Harry Potter books, let alone the later ones.
Posted by KateCoombs at 8:42 PM

You had me at magic cows. Then you added chocolate! This just got added to my TBR pile.

Oh, good! Yes, it really is a sweet combination. :)