A Review of The Raven Boys by Maggie Stiefvater

I really liked this book. Like other readers whose reviews and reactions I’ve seen, I was a little irked by the lack of payoff on certain plot points at the end, but that’s syndrome series, and its all too common these days. What the author does very successfully is develop an Outsiders-worthy cast of characters struggling with the very act of being themselves. I say The Outsiders, but the titular Raven Boys are at least in part a fabulously wealthy bunch. The book’s first major perspective, though, us that of a girl from the town of Henrietta who doesn’t have a lot of money. She lives in a home full of women who are fortunetellers, or more probably witches. The odd group of people living in her house are presented in such a mundane, slightly quarrelsome way that they do not seem contrived or staged. We start with a wonderful first line: “Blue Sargent had forgotten how many times she’d been told she would kill her true love.”
Which, I will tell you right up front [SPOILER!] is the promise that is not fulfilled in this book. A promise that is set up, however, rather beautifully. Although The Raven Boys ends up being about a particular kind of danger that is dealt with here, its focus is primarily on character and the interactions between characters. Blue, in fact, turns out to be less important and even less interesting than the four boys she meets. She’s right to be dubious about this group from the elite boys’ school on the edge of town, Aglionby: two wealthy boys named Gansey and Ronan, a quiet boy named Noah, and a scholarship boy named Adam. 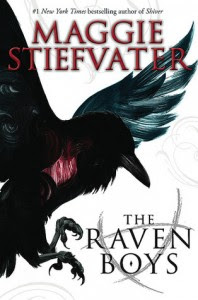 Adam takes a shine to Blue that she cautiously returns, but that’s only after Blue has had a supernatural encounter with what appears to be the ghost of Gansey in a graveyard. You can tell Blue is meant to be with Gansey and that that’s going to cause trouble. Gansey’s relationship with the other three boys is fascinating. He is on a quixotic quest to find the ley lines and a mythological figure in Henrietta. He leads the other boys, saves them, but also controls them in ways that Adam, at least, resents furiously. The themes Stiefvater brings up with this web of lives and personalities are thought-provoking, and they read simply as offshoots of these characters.

If anything, The Raven Boys reminds me of Margaret Mahy’s book, The Tricksters, which is high praise indeed.

The supernatural elements in Steifvater’s story wind in and out in ways that only serve to heighten the tensions between characters. The boys wonder if the paranormal is real. Gansey has his reasons for believing, and Blue knows all too well that it is. Her own power is not what she wishes it were. Even the villain of the piece has an uneasy relationship with the supernatural. He has longed for it, sacrificed for it, and done terrible things for it. It’s easy to see him as a symbol of the future for one or more of these boys, especially considering his past.

The writing itself is superb. Here is Blue talking to Adam for the first time. She doesn’t know any of the boys’ names yet, but she’s given them nicknames.

To her surprise, it was Elegant Boy, face gaunter and older in the distant streetlight. He was alone. No sign of President Cell Phone, the smudgy one, or their hostile friend. One hand steadied his bike. The other was tucked neatly in his pocket. His uncertain posture didn’t quite track with the raven-breasted sweater, and she caught a glimpse of a worn bit of seam on the shoulder before he shrugged it under his ear as if he was cold.

You get a strong feeling of fate in The Raven Boys, a feeling that for all their personal struggles and thoughts, this group of people is being driven madly in a direction far past their own understanding. Like classic characters along the lines of Oedipus or Romeo and Juliet.

Another complaint about the book I’ve heard is that it moves too slowly. This is certainly not The Lightning Thief or even The Hunger Games. But are we past enjoying a subtle plot that relies heavily on character to smolder towards certain conclusions and then other, later destinies in YA fiction? No, that first sentence does not entirely play out in this initial volume. But other plot points do. Perhaps more important, the set-up is eerily powerful and touching in aching, personal ways. If that works for you, please do read The Raven Boys.

Here’s the book trailer, insufficient to my way of thinking even if it is by the author.

Note for Worried Parents: This is just not a middle grade book. It’s thoroughly YA, mostly because of mature themes and the way it reads. Don’t bother giving The Raven Boys to anyone under 12, or maybe even under 15. They won’t get it.
Posted by KateCoombs at 10:39 AM

I enjoyed this one a lot. I agree the ending was frustrating (particularly since I read it before the official pub date which makes book two seem even farther away).

However I am really baffled (and like you a bit saddened) by all of the people complaining about pacing. I thought Stiefvater did a great job keeping tension high and revealing the mysteries of the story in a logical way. This is such a character driven story I feel like it risked losing a lot of its charm if the focus had shifted to plot movement rather than characters.

Miss P--I'm glad you agree about the pacing question. The tension really did pull me in and keep me going and yes, it's such a character-driven story. I really do think Stiefvater made it work, even if she did hold out some for Book 2. Not every story can or should be endless chase scenes and gunfights. (Though, in all fairness, a gun is involved at a certain point or two here!)