A Review of House of Shadows by Rachel Neumeier

Neumeier builds a strange and solemn world in her latest book, beginning with eight sisters who must sell two of their number to survive after their father dies. The first sister is sold into what appears to be a high-class brothel, but we learn that in this partly Asian-inspired culture, girls can be trained to become “flower wives,” a type of concubine whose children have some legal status even though they are not the offspring of the higher-status legal wives. In this case, Karah is so devastatingly beautiful that the respected Cloisonné House pays a very large sum for her—and must then find a way to protect her from rival trainees. 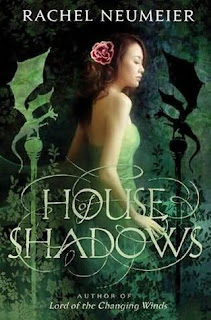 Nemienne is apprenticed to a far different master, a mage named Ankennes. She has a knack for magic that her sisters only saw as dreaminess. Nemienne practices spells, yes, but she also practices going into the darkness under the mountain, a place that’s as much a magical dimension as a physical location. Challenging the darkness is the most important task Nemienne must face.

Another major player is Taudde, a young magician-bard from enemy kingdom Kalches. He hasn’t come for the reasons people in power suppose, though. Those people find out who he is and blackmail him into helping them in unpleasant ways. Then there’s Prince Tepres, who doesn’t suspect the plots against him and falls hard for Karah. Last but certainly not least is Leilis, a girl who was meant to be a flower wife but instead is a sort of glorified servant in Cloisonné House. She has more power over the doings in the house than one might think, however.

All of these people are intriguing, rich characters. And all of them wind up coming together in dangerous, complex ways when the dragon under the mountain stirs.

Really, my favorite character just might be a mysterious cat named Enkea who deigns to live in the mage’s house. And my favorite passage is a story Karah tells to some visitors at Cloisonné House.

There’s a stately, poetic feel to Neumeier’s writing that evokes older fantasy such as Tolkien’s famous work or perhaps more accurately Patricia McKillip’s or Ursula LeGuin's. The author certainly has a way with words—and with ideas. Here’s an example:

The steps of the [mage’s] house were like the house itself: rough and oddly angled, with unexpected slants underfoot. The polished statue of a cat sat beside the door, gray soapstone with eyes of agate. Nemienne touched the cat’s head curiously. The stone was silken smooth under her fingertips. “There’s no bellpull,” Enelle said, stating the obvious because she was nervous. “I think the cat is the bell,” Nemienne said with an odd certainty, running her hand across the statue’s head a second time. Before them, the door unlatched itself with a muffled click.

I also like how Neumeier gives Ankennes his own rather personal take on the situation in the kingdom. The contrast between his views and what the king sees reminds me that in many books, mages and wizards seem unbiased to the point of lacking personality—or else they are bad guys or good guys in simplistic ways. This is not true of Ankennes.

House of Shadows feels gravely atmospheric and stylized. The book is marked by ritualized storytelling and plot evolution—as if the author were an Indonesian shadow puppeteer. Rachel Neumeier has written an intricate fantasy world, and I’m happy to get the sense that a sequel might be in the works.

Note for Worried Parents: This book is for teens. It has a mature tone, and the talk about flower wives and references to their lesser sisters, the prostitutes (though they are not called that) pretty much seals the deal.
Posted by KateCoombs at 7:31 PM

Wow. This sounds very intriguing. With the mention of prostitution, I wondered about the age level. I think I'll look for this one.

Lin--The topic is handled gracefully, and issues of flower wives and the status of their children are addressed as part of the social system. It's not offensive per se, but it's definitely not for 9- and 10-year-olds!

Oooh, sounds intriguing! Added to the pile. (It's a virtual pile, so I can keep adding things infinitely!)

I love the idea of a virtual book pile! And this one should definitely be added.