A Review of I Shall Wear Midnight by Terry Pratchett 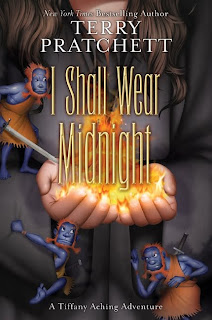 Okay, I'll try to write a real review instead of just jumping up and down screeching, "I got an ARC of the new Terry Pratchett book!" Or rather, now that I've done that and breathed into a paper bag and all, I think I can be mature enough to share some actual thoughts with you. (Warning: Largely thematic spoilers ahead!)

I do hope you've already read the first three books about young witch Tiffany Aching: The Wee Free Men, A Hat Full of Sky, and Wintersmith. You'll enjoy this one a lot more if you have. For one thing, you'll already be familiar with Tiffany's sidekicks, the Nac Mac Feegle, those miniscule blue guys in kilts who are endlessly spoiling for a fight, preferably combined with a drink. Of course, they're determined to look after Tiffany while they're at it.

Tiffany is now officially the witch of the chalk country, and she thinks she understands what that means. She takes her work very seriously, so much so that she sometimes misses certain cues. Because people don't always react the way you think they should, and it doesn't help that there's an evil semi-supernatural entity going around playing on people's fear of witches.

So yeah, trouble is brewing, and things only get worse when the baron dies. Tiffany travels to the great, dirty city of Ankh Morpork to find the baron's heir, Roland, with whom Tiffany once had something resembling a romance. The Nac Mac Feegle come along and create havoc, which is just what they're supposed to do. Tiffany and crew also run into some of Pratchett's best Ankh Morpork characters from his other Discworld books. One of them even finds himself bonding with those little blue men!

While in the city, Tiffany compares notes with the proprietor of a famous shop that sells witch supplies as well as with an even more mysterious mentor before she sets off for home, having delivered her message to the baron's son. But everyone is acting funny, and Tiffany winds up in Roland's dungeon with the goats. Of course, she doesn't stay there for long—she meddles with the best of them, and soon she is hunting the creature that's spreading the hatred of witches. The older witches offer to help her, but Tiffany turns them down. She knows she needs to prove herself.

Compared to Pratchett's other books, this one has a bit of a slow start, but then, Pratchett's worst is still head and shoulders above most writers' best. Although the man is known for his humor, I'm in awe of his ability to create characters that matter, and to talk about the human condition by telling amazing stories.

One way of looking at all four books is as an account of Tiffany's coming-of-age. But we sometimes see simple stories along those lines, and Tiffany's is complicated. For instance, I Shall Wear Midnight has thought-provoking things to say about romance, even though at first glance, this may seem like a minor theme.

Tiffany clearly had a relationship with Roland for a while, and everyone knows it. What's more, they comment on it. A lot. Which gets on Tiffany's nerves, although at first we're not sure why. Even Roland's fiancé knows it, and in fact, her jealousy leads her to cause major difficulties for Tiffany without realizing the full impact of what she's done. (Note the irony of the things Roland thinks he's avoiding with Tiffany compared to what he doesn't understand about his own fiancé. Brilliant!)

Tiffany has no illusions that it would have worked out with Roland, and yet—she feels left out. She wonders if she'll be alone forever. Though she never actually says so, I get the feeling she's wondering if she'll wind up like her formidable mentor, Granny Weatherwax. Does being a great witch mean you have to be alone your entire life?

From a young reader's standpoint, Tiffany brings up a valuable question, which is, "I'm not like the others. Will anyone ever understand and care about me in a normal way, when I'm not normal?" We can easily see why Tiffany feels different, but then, don't most of us feel that way at least some of the time? Certainly the kind of bright, creative kids who are probably reading these books might share Tiffany's worries.

It may seem facile that Pratchett provides an answer to this question in the form of a quirky young guardsman named Preston (who would really rather be a doctor), but then, for a girl like Tiffany, meeting the right kind of person necessarily feels like a surprising whim and a kindness on the part of the universe.

Even so, Tiffany is alone, and always will be. All of us are, even when we're with the people we love and who love us. So Pratchett's answer to Tiffany's question is both yes, and no.

Mind you, Tiffany Aching is never a damsel in distress. She helps herself (ever-so-literally), and her efforts pay off. She also catches on to the fact that there's more to being a good witch than hard work, admirable though that may be. You have to pay attention to people, to what each of them wants and needs and feels. When you do, you might be knocked sideways at times, but you will be far more capable of helping those you want to help. People like Tiffany and Granny Weatherwax make a difference, although it isn't easy. But as Pratchett points out, it doesn't have to be. It simply has to matter.

Note for Worried Parents: This is a book for teens and has some mature themes, e.g., domestic violence, attempted suicide, and references to a couple's upcoming honeymoon night (the bride wants information!).

FYI: I requested an ARC of this book from HarperCollins. I Shall Wear Midnight will be available on September 28, 2010.
Posted by Kate Coombs at 8:42 PM

Labels: fantasy, I Shall Wear Midnight, Terry Pratchett, YA

Yikes! You're so right! I haven't been getting much sleep lately... :) Thanks for catching that.

Aaaaaaaagh! You are so lucky! This is another book I really ought to just suck it up and buy (ie preorder-and-therefore-get-almost-immediately). Not to mention buying the middle two. And rebuying the first one because I keep forgetting to go through my mom's bookshelves and steal my original copy back from her.

Fancy the content I have seen so far and I am your regular reader of your blog.

I am pleased to see my blog in your blog list.

Hope to see a positive reply.

Thanks for visiting my blog as well !

Waiting for your reply friend !!!!!

RockinL--Certain books simply MUST be owned. And hey, gotta watch out for those moms... :)

Megaan--While I only list blogs in my blog roll that are specifically about children's books, I do like your NASA blog. My students and I are huge science fans!

My children and I listened to the audiobook of Nation last year, and it was fantastic! In fact, I think I may need to reread that on paper soon. There was just so much going on in that book--we had wonderful discussions about it afterward.

Sydney--You're welcome! Yeah, whenever I hear that one of my handful of favorite authors has a new book coming out, it feels like waiting for Christmas morning or the start of summer vacation. And Pratchett is definitely on the list.

I'm glad you and your kids enjoyed the 100 Cupboard books, too. I know I acknowledged that Book 2 was a little convoluted, but I didn't much care--I LOVED those books.

Ohhh, so very jealous!! Although I don't know if I could *read* this one... I listened to the first three Tiffany Aching books on audiobook, and Stephen Briggs does such a good job with the narration (particularly the voices of the Feegles) that it would be strange to suddenly shift formats.

Fyrefly--Good point. I'm a visual person myself, but now I'm tempted to listen to the audiobooks, especially to hear the Feegles!

Just finished reading this today. I have to say that while I loved the rest of the Aching series, the witches being my favourite line, this is probably, bar Eric, my least favourite Discworld book.
I don't know if it was just me, but it seemed as though the book was there just to set up characters for the future of the discworld. The main plot seemed to take a backseat, especially with how little was said about it when it was ended. But at the same time, I like the character development that he's done. Especially the big reintroduction to the series, I was quite disappointed that hadn't happened sooner, there was so much wasted potential there!
Something to keep in mind though is that this was his first attempt at a dictaphone novel, so some amount of any concerns of the book could be nothing more than teething trouble while he adjusts.

Aaron--I did notice a few rough spots, but as you said, the character development was still strong. Interesting about the dictaphone; I think that would be a tough change to make.

I've read all of the Discworld books. I particularly like Granny Weatherwax, although Sam Vimes has really grown on me, too. (But secretly, my favorite Pratchett character just might be Death!)