When I saw A Dignity of Dragons on Seven Impossible Things Before Breakfast, I was overcome by book lust. Not only do I love the idea of a collective nouns book about magical creatures, but I already admired Jacqueline K. Ogburn's books (e.g., The Magic Nesting Doll and The Lady and the Lion) and Nicoletta Ceccoli's artwork (e.g., for Kate Bernheimer's The Girl in the Castle Inside the Museum or the jacket art for Joseph Helgerson's Horns and Wrinkles). 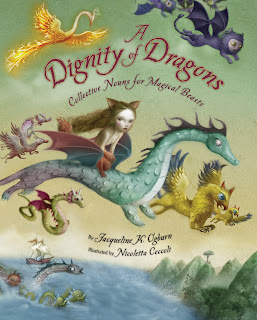 Here Ogburn takes the already fun idea of collective nouns—such as a murder of crows, a parliament of owls, or an army of frogs—and applies it to mythical beasts. She makes good choices, to say the least: I especially like the play on words in an "amazement of minotaurs" and the nicely allusive "pandemonium of fauns." Ogburn groups the creatures by type, so that, for example, mermaids, sea monsters, sea horses, and sea serpents share a spread with "a continent of kraken." And we get quite a selection of were varieties on another spread.

In amongst the more common of these uncommon creatures, you'll find some unusual ones from a variety of cultures, like the Mexican Quetzalcoatls, the Australian rainbow snakes, and the Chinese Chi'lins. An author's note at the back gives a brief description of each entry's place in mythology.

There is something completely frivolous about this book, but that's part of its charm. The settings are appropriately atmospheric, with many a mist and mystery. Italian artist Ceccoli's beasts are rendered with a slightly antique look, and of course, the ones with human faces share the sweet, stylized features that characterize all of her work.

A Dignity of Dragons seems meant for fantasy aficionados young and old; it could also act as a project starter with 4th or 5th graders who could compare these collective nouns to those describing real animals and then invent their own. (Collective nouns may be more of a poetic than a scientific device, but aren't they marvelous?) 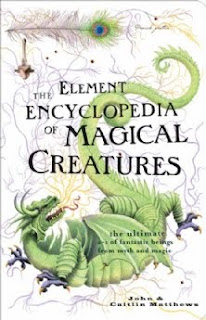 Speaking of mythical beasts, this seems like a good time to point you to a couple of encyclopedias focused on exactly that. As a writer of fantasy, I've had reason to refer to such a book in the past, so I can recommend a couple. A recent acquisition is The Element Encyclopedia of Magical Creatures by John and Caitlin Matthews. A quick count shows 79 entries for the letter A alone, including gods, beasts, and fairies from around the world. Here's a sample of an entry for the Kappa:

In the Shinto religion of Japan, the Kappa are water spirits who pull children into the water and drown them, and who also attack travelers. They are unable to survive for long on land since they must keep their heads wet. They are described as having long hair, the body of a tortoise, scaly limbs, and an ape-like face. They live on a diet of cucumber and blood and they fly on enchanted cucumbers which sprout wings like dragonflies. 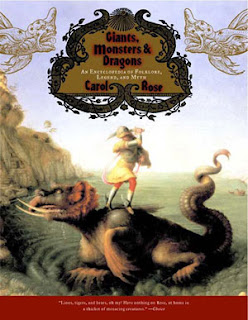 The other resource I own comes in two volumes, Giants, Monsters, & Dragons: An Encyclopedia of Folklore, Legend, and Myth and Spirits, Fairies, Leprechauns, and Goblins: An Encyclopedia, both by Carol Rose. The monster one has been of most use to me. It has 190+ entries for the letter A alone, so it covers a little more ground than the Matthews book. Here's the entry for Kappa:

These are aquatic monsters in the mythology and folklore of Japan. They are variously described as being small and in the shape of monkeys, with scaly skin and webbed fingers, or as having the body of a tortoise with the head of a monkey. Whatever the description, they are reputedly green, and their heads have a depression in the top of the skull in which there is a fluid that gives them their life force. The Kappa, also known as Kawako, which means "Child of the River," as the name implies, inhabits ponds and rivers. They are particularly malicious and entice humans and animals into the water, where they devour their victims and drink their blood. If a human is clever enough to negotiate with the Kappa, he may keep his life, and if befriended by offering the preferred cucumbers as food, they may teach the person about medicine. If, however, the Kappa is intent on consuming his victim, its potency may be drawn from it by making a low bow, which must be returned; in doing so, the liquid, which is the source of the Kappa's power, will drain from his head. ...See also Buso, Jenny Greenteeth, Llamhigyn y Dwr, Peg Powler

Unlike most encyclopedias, each of these volumes provides a table of contents, as well.

I've always loved the fact that kappas keeps their soupy life essence in the bowl-shaped tops of their heads and that you can trick them into spilling it by bowing so they'll bow back. I'm glad that's clear in this entry. It isn't apparent in the Matthews entry—but then, this is just one example. Even if the Rose books seem more detailed and scholarly overall, the Matthews book is still a friendly, handy volume that includes some nice storytelling here and there.

So if you find yourself dreaming about unicorns, perhaps longing for a little magic in your life, look for A Dignity of Dragons—and maybe even one of these encyclopedias, which, frankly, would make a very fun bathroom book even if you don't need it for research purposes.

Note for Worried Parents: Some of you may want to know that a few of the mermaids and sphinxes in A Dignity of Dragons have their smallish breasts showing, though it's not one of those things that really leaps to the eye when you're reading.
Posted by Kate Coombs at 9:08 PM

Book author here: Thanks for your thoughtful review of "A Dignity of Dragons." I consulted Carol Rose's books heavily when I was working on this manuscript and of course, James Lipton's "An Exaltation of Larks." I thought it was would be a challenge to illustrate, but Nicoletta did a marvelous job of composing the groups so they didn't look crowded or chaotic.
Jacqueline K. Ogburn

Jacqueline--Thanks for stopping by, and for creating, with Nicoletta, such a beautiful book! Now I'm even more glad I talked about Carol Rose's book here. I'll look for Lipton's.

Hello Kate, thank you very much for this post, it is really interesting and with new titles to look into! Thanks for your wonderful blog. Cris

And Charlotte, this book is definitely right up your alley.