Sometimes when I drink a glass of water, I'm struck by how amazing water is, how great it is that I have access to nice, clean water, and how my body is made up of such a large percentage of water. As you may recall from science class, water is one of the key factors promoting life on our planet. In fact, research regarding life on other planets begins by looking for evidence of the presence of water. So today's post is a celebration of watery books—one nonfiction lead and a handful of picture books—slightly obscure, cool ones, my favorite kind! 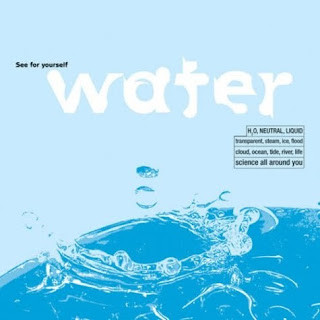 Another gorgeous offering from the nonfiction folks at DK publishing (makers of the Eyewitness series). Day and a team of graphic artists treat us to a myriad of facts about nature's finest ingredient in this page-turning nonfiction extravaganza. Yes, it would make a good source for a school report on water, but anyone with an ounce of curiosity will find themselves intrigued by some of the material here. For example, did you know that an adult female human is 50% water, an adult male is 60% water, and an infant is 70% water?

Besides the obvious, well-presented spreads about things like the water cycle and weather, we find out about sewer robots in Germany; the amount of water required to maintain livestock versus oranges, rice, and wheat; the reason Baikul in Russia is the only major lake that isn't being silted out of existence; and how a freshwater pumping station can be located in the middle of the Mediterranean Sea for boat traffic. There's also a timeline of key events in water history, ambitiously starting 4 billion years back before jumping to a more modern 9,000 BCE. 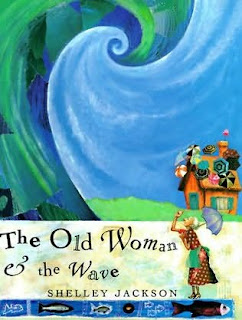 You'll get a nod to global warming and its relationship to the world's water, a gorgeous fold-out illustrating the water cycle, and my favorite graphic, a drawing of the globe that repositions all of the water on one end and the land on the other, including a breakdown of fresh and saltwater and glaciers. Did you know that the equivalent of 350 billion Olympic-sized swimming pools evaporates from Earth's surface daily?

For a user-friendly look at our watery world, track down this book. I'd recommend it for ages 8-12 as well as interested adults.

The Old Woman and the Wave, written and illustrated by Shelley Jackson (1998)

Essentially a parable, this book is the story of a cranky old woman whose house is haunted or maybe stalked by an enormous wave which simply curves high above the roof, dripping. The old woman covers her roof with large umbrellas and yells at the wave to go away, but it persists in hanging around. Then a passing stranger admires the wave, the old woman's dog goes for a swim in the wave, and she can ignore it no longer. She ends up making peace with the wave, which willingly takes her on an epic journey into the unknown. I'm pretty sure this book is about taking risks, but it could be about a lot of things. The mixed-media art is unusual and lovely, and children will probably giggle at the idea of that giant wave even as they enjoy following the old woman's transformation. 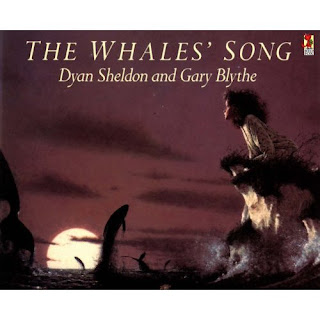 The Whale's Song by Dyan Sheldon, illustrated by Gary Blythe (1991)

Despite the realistic style of the paintings, this is a magical book, or perhaps we should call it magical realism. The Whale's Song begins:

Lilly's grandmother told her a story.
"Once upon a time," she said, "the ocean was filled with whales. They were as big as the hills. They were as peaceful as the moon. They were the most wonderful creatures you could ever imagine."

Grandmother goes on to hint to Lilly that if she goes to the end of the pier and gives the whales something special—"A perfect shell. Or a beautiful stone."—they might sing for her. Naysayer Great-uncle Frederick scoffs at all of this, but Lilly creeps out by night to try her grandmother's suggestion. After her initial failure and more discouragement from Frederick, she goes back home, but then something magical happens. (I hope that you, like me, will ignore the implication that Lilly might be dreaming at this point!) The illustrations are particularly beautiful, as is this book's magical take on the giants of the sea. 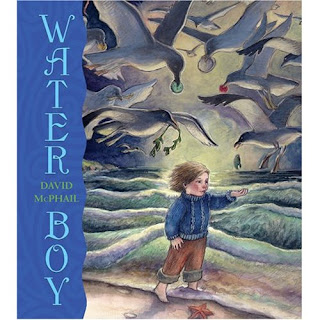 When a boy hears at school that he is mostly water, he worries that he will dissolve in the rain, among other things. He was already a reluctant bather, and now he decides to avoid water diligently. But his mother comforts him, so he gradually makes friends with water. In fact, water makes friends with him, too! It starts to follow him around, especially after he asks his grandmother to make him a sweater "the color of the ocean on a cloudless afternoon."

Strange things began to happen. One evening, as he was helping with the dishes, the water from the faucet curled into letters that spelled his name.

The boy becomes capable of all kinds of watery feats, and then the water asks for his help. At this point, we get a gentle lesson about fighting pollution. Water Boy meanders like a brook, but it is a charming tale, with lovely, watery illustrations and an engaging young hero. The jacket design is especially nice. 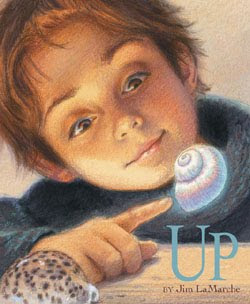 Up, written and illustrated by Jim LaMarche (2006)

Before there was a Pixar movie, Jim LaMarche created this book. It's mostly the story of a boy whose father and older brother think he's too little to help, but the conflict is set on the shore, and the help has to do with work on a fishing boat. Tired of being called Mouse, Daniel exerts his exasperation and develops an ability to lift objects with his mind.

But rather than going all sci-fi with this, the author/illustrator is more subtle; Daniel doesn't advertise his newfound power, which at first can only lift small things very slightly. Eventually, he uses it to assist in saving a beached whale, although only his father suspects Daniel's gift, and even he's not sure. What he is sure of is that Daniel is old enough to go out on the fishing boat. Like Water Boy, Up is notable for truly stunning artwork. It should also prove comforting for kids in the 5-to-7 range who feel that the world doesn't take them seriously enough.

So perhaps you've been longing to go to the beach or at least longing for a nice tall glass of water: have a book while you're at it! Please feel free to list other watery books in the comments.
Posted by Kate Coombs at 8:25 AM

All of these books look absolutely wonderful! I can't wait to check them out!