A Review of The Red Pyramid by Rick Riordan

Hooray, it's out! "It" being the first book in The Lightning Thief author Rick Riordan's new series based on the Egyptian gods and magic, The Red Pyramid. If your offspring loved the Percy Jackson series, you may already have this new book in your hot little hands. If not, what are you waiting for?

And of course, we have to ask ourselves, just how does the new book stack up? 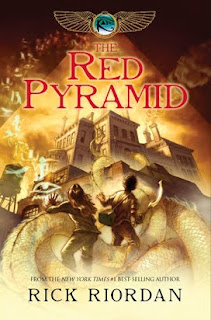 On the one hand, I could argue that there's a whole lot of setup and explaining going on in The Red Pyramid. On the other hand, all of that is needed, and Riordan does a pretty good job of making the info dump a natural part of his storytelling as we discover things together with our young main characters.

Fourteen-year-old Carter Kane is the book's hero, along with his sister Sadie. After their mother's mysterious death, Sadie was sent to live in London with her maternal grandparents, while Carter traveled the world with his archaeologist father. Let's just note here that Carter is a little older than Percy Jackson when those stories began, which reminded me that the movie version made Percy older (so Riordan got smart about the age thing!). What I really like is that Carter and his sister are black—or at least, their father is black and their mother was white. I live in L.A., and mixed-race kids feel like a nice representation of our modern world. This also allows Carter and his sister to be connected by blood to the pharaohs of ancient Egypt, which ends up being an important plot point.

It's Christmas Eve, and Julius Kane is more nervous than usual. He takes his children to the British Museum, where he hopes to "make everything right," apparently by releasing a helpful Egyptian god. Unfortunately, he releases an evil Egyptian god named Set while he's at it and ends up trapped in a magic coffin which takes him away, leaving Carter and Sadie behind in the midst of what looks like a bombing. They are brought to their grandparents' house and interrogated by police who cast suspicion on Dr. Kane, then picked up by their father's wizardly brother Amos, who spirits them away to New York City to protect them from the newly unleashed Set. Because yeah, Sadie and Carter have powers, and they're part of something world-changing. And yeah, they need to save said world from Set's destructive plans.

Sadie and Carter find out more about Egyptian magic, their own heritage, and a group called the House of Light—protectors of Egyptian magic who would just as soon kill the two kids as have to deal with them. There are questions of who can be trusted, also who's possessed by an Egyptian god (for good or for ill). We get various adventures, including monster attacks, and some of the author's trademark humor along the way, with a cheery little side trip to the land of the dead. Riordan has Sadie and Carter take turns narrating, which is sometimes helpful and other times confusing. (Riordan even throws in some talk that makes the reader feel like he/she is not only being addressed by Carter and Sadie, but is being recruited to their cause.) This book is what they call uneven, but I have a feeling that, with all of the setup out of the way, Riordan will shine in the second and following books of the Kane Chronicles.

I got a kick out of the author's nod to his Olympians books, by the way. When Amos first takes the kids to the mansion, we read:

"So you can't live in Manhattan?" [Sadie] asked.
Amos's brow furrowed as he looked across at the Empire State Building. "Manhattan has other problems. Other gods. It's best we stay separate."
"Other what?" Sadie demanded.
"Nothing."

I should mention that one feature of Amos's mansion is a baboon named Khufu who's a huge fan of the L.A. Lakers. Other secondary characters include the helpful if unpredictable cat goddess Bast and a beautiful young girl named Zia from the House of Lights, whose loyalties are torn between her assigned duties and her desire to help Carter and Sadie. (Read: future sidekick/love interest comparable to Annabeth in The Lightning Thief.)

In a nice twist, late in the book Riordan has Carter make a really interesting decision about his potential for a powerful future. It's also intriguing to see how the author handles the issue of the missing Julius Kane.

A perfect read? No. But The Red Pyramid is nevertheless a good series start. If you're a Percy Jackson fan, read this one and then join me in looking forward to smoother sailing (preferably in a narrow reed boat with eyes) in Book 2.
Posted by Kate Coombs at 8:08 AM

Here via Charlotte (at Charlotte's Library); I keep trying to read this one, but it keeps being snagged by my daughters... I did get as far as his nod to the Percy Jackson books, which I also thought was clever. I'm curious to see how the rest of the book goes.

Now see, that's one of the drawbacks to short people--they swipe your books! ;)